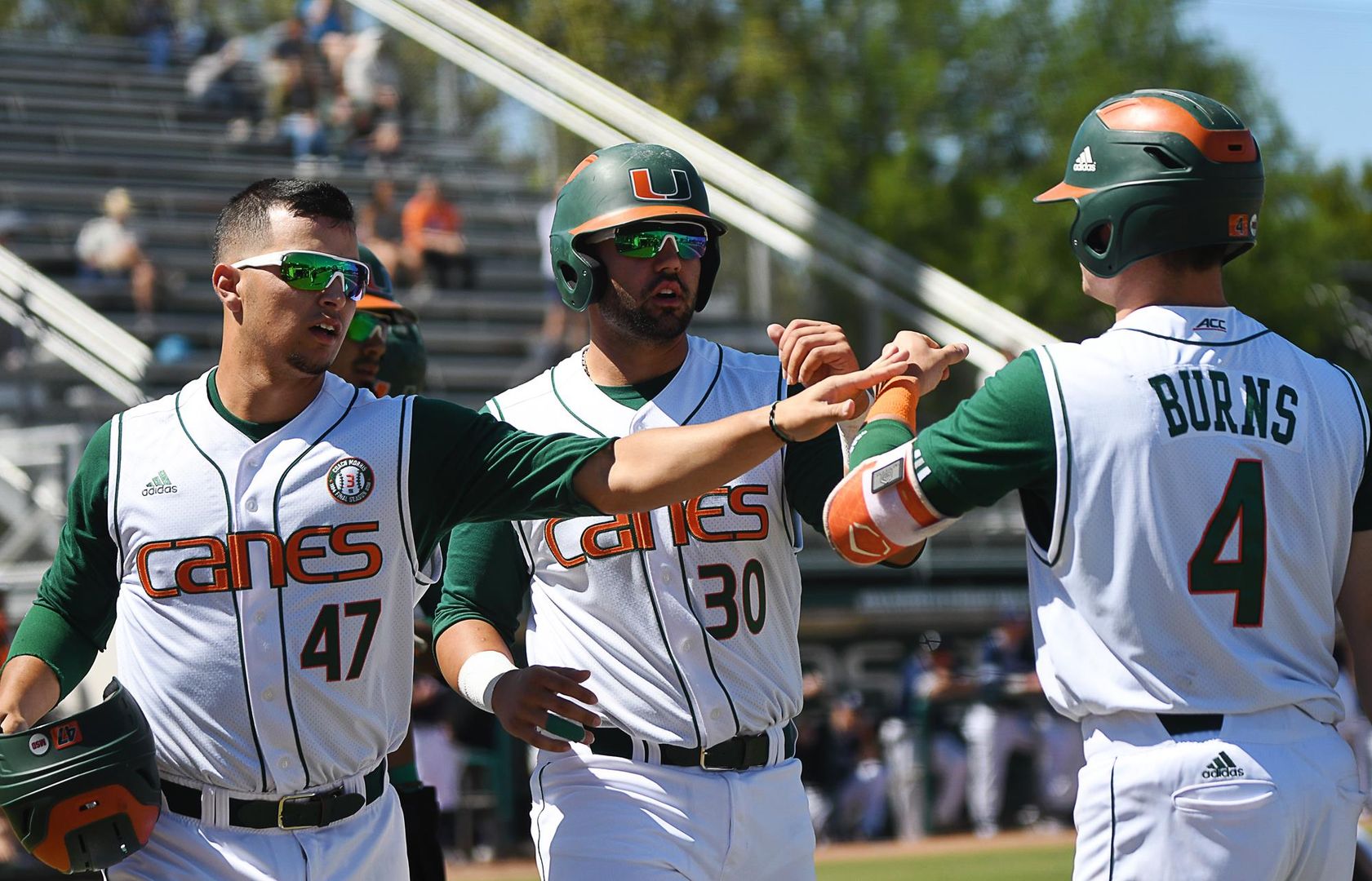 Freshmen Back McKendry To Take Series

Miami (5-6) was not deterred by the quick turnaround time for the 11:30 a.m. first pitch, but must have appreciated a game that took only 3:03 to complete – a breeze compared to a six-hour Game 2.

Sophomore Evan McKendry delivered another impressive outing, Miami’s offense came up with timely two-out hits, and the Hurricanes came through with their second series win of the spring.

“I want to congratulate our team on getting this series, coming back after losing on Friday night,” head coach Jim Morris said. “Maine has a good club. They’re banged up a little bit, like we are, but they play hard.”

A night after stranding 19 runners, the Hurricanes scored six of their seven runs with two outs.

Freshmen Tony Jenkins (two) and Isaac Quinones (four) combined to drive in six runs, while veteran pitchers Michael Mediavilla and Cooper Hammond helped seal the win out of the bullpen in front of 2,368 fans.

“We honestly just executed when we had to,” Quinones said. “We had big situations, and we got the runs when we needed to get them. There were moments last night where we didn’t execute in the right situations, but today we obviously did, and we got things done.

“Pitching was outstanding, hitting came through and it turned out to be a quality win.”

McKendry tied a career high with 10 strikeouts in another strong performance. After allowing a run in the first inning to give Maine an early 1-0 lead, McKendry (2-1) mostly cruised through the rest of his outing, avoiding any damage when the Black Bears (3-8) were able to get runners on base.

“I didn’t feel like I had all my stuff working ?well, so I knew I had to throw my pitches and start getting some feel for everything,” McKendry said. “First inning was a little rough, but then I settled in and just got comfortable.

Miami looked poised to erase that early deficit when it loaded the bases on a single and back-to-back walks in the second inning. But Maine starter Chris Murphy (0-3) buckled down, striking out Quinones and getting Jenkins to ground into a fielder’s choice to keep the Hurricanes off the scoreboard.

Miami finally broke through in the fourth, taking a lead it would not relinquish.

Jenkins’ two-RBI triple down the left field line scores Quinones and Escala. An inning later, Toral padded Miami’s lead to 3-1 with an RBI single and Quinones delivered the knockout blow.

Facing Maine reliever John Arel, Quinones drove an 0-2 pitch just inside the left field line and past Maine third baseman Cody Pasic for a bases-clearing double – his second extra base hit in as many nights.

Quinones – who added a bases-loaded walk in the eighth to put Miami ahead 7-1 – impressed when called upon this weekend after redshirt freshman Michael Amditis suffered a hand injury in a midweek matchup with FAU. He caught 32 of 33 innings on the weekend.

“Isaac got his chance to play and had an outstanding weekend,” Morris said. “He was our player of the game today. That was big.”

“We said before the game that just because we won last night didn’t mean the weekend was over,” McKendry said. “We needed to come out today and take the win so we could take the series.”

Mediavilla tossed two scoreless innings of relief while Hammond pitched a scoreless ninth, ending the game on a groundout.

The Hurricanes make the trip to visit crosstown foe FIU on Wed., March 7. First pitch is set for 7 p.m. from FIU Baseball Stadium.