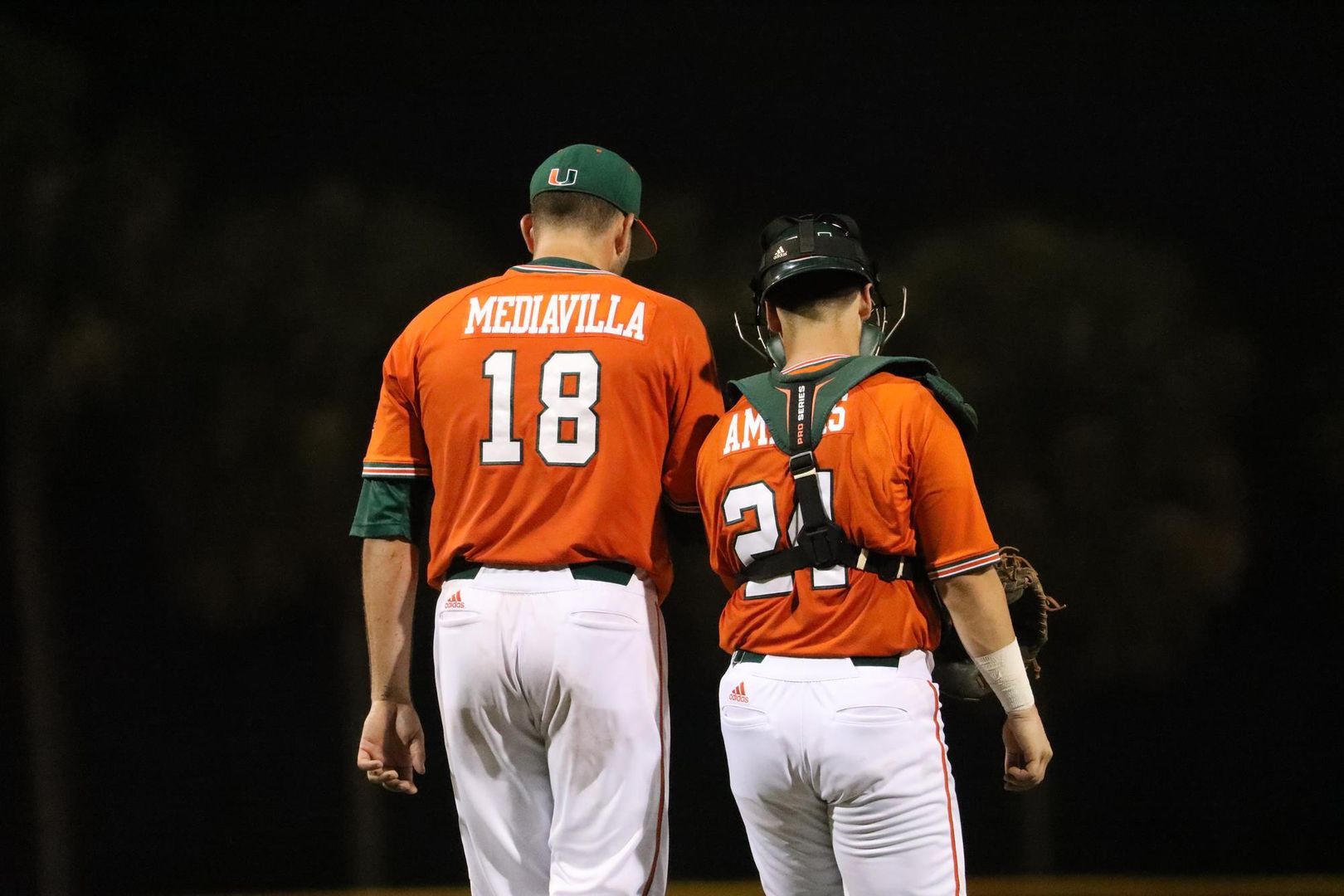 No. 24 Baseball Falls to Missouri

And for the second straight contest, a fourth inning marred by miscues doomed the No. 24 Hurricanes. In only its second-ever visit to Mark Light Field, Missouri took advantage of Miami’s mistakes in an 9-0 win Wednesday night in front of 2,202 fans.

Five of the Tigers’ nine runs were scored in the inning.

The Hurricanes (2-2) mustered only six hits against the Tigers (3-1), who were paced by junior righthander Brian Sharp’s five shutout innings.

“We knew coming in he was going to throw a lot of breaking balls, a lot of sliders, and he did,” senior Michael Burns said. “We really needed to hit that ball the other way, stay through that ball a little more than we did throughout the game.”

Lefthander Michael Mediavilla, making his first start of the season, had not allowed a hit Wednesday in through three scoreless innings.

But the senior southpaw got himself into trouble when he sandwiched two walks around an infield single to open the fourth, and a comebacker from Missouri’s Mark Vierling was mishandled by the lefthander to plate the opening two runs.

Brett Bond’s RBI single made it 3-0, and a safety squeeze from Alex Samples pushed the lead to 4-0 before Chris Cornelius’ single to center capped the inning’s scoring.

Only two of the five runs allowed by Mediavilla (0-1) were earned.

“I felt good. I felt like I was attacking hitters and getting ahead of them and did a good job mixing my location and mixing my pitches [early],” Mediavilla said. “In the fourth inning, one error kind of created the momentum for them…they had a big inning.”

The Hurricanes had a chance to cut into the lead in the home half of the fourth when Burns and junior Romy Gonzalez both singled to put runners on the corners with one out. But Sharp got back-to-back strikeouts to end the inning and keep Miami off the scoreboard.

The single from Burns extended his season-opening hitting streak to four games.

Miami’s first hit of the night came on a one-out triple from senior designated hitter Michael Perez in the third. Perez, who had a pinch-hit single in the ninth inning of Sunday’s 7-5 loss, was making his first start of the season.

The Hurricanes once again had runners on the corners in the seventh when redshirt freshman Michael Amditis singled and Perez was hit by a pitch, but Missouri reliever TJ Sikkema avoided any damage when he struck out Willy Escala to end the inning.

“Offensively, we didn’t do a very good job adjusting,” head coach Jim Morris said. “We struck out too many times, hit flyballs and didn’t put any pressure on them. A tough game for us.”

The Tigers added four insurance runs in the ninth to seal the victory.

“The scouting report coming in was that Missouri had a good club, and they are,” Morris said. “They’re a talented club. They have some guys who can swing the bat and they’re going to have a good year.”

Miami returns to Mark Light Field Friday night for the series opener of a three-game set with No. 1 Florida. First pitch for the contest, slated for broadcast on ACC Network Extra, is set for 7 p.m.