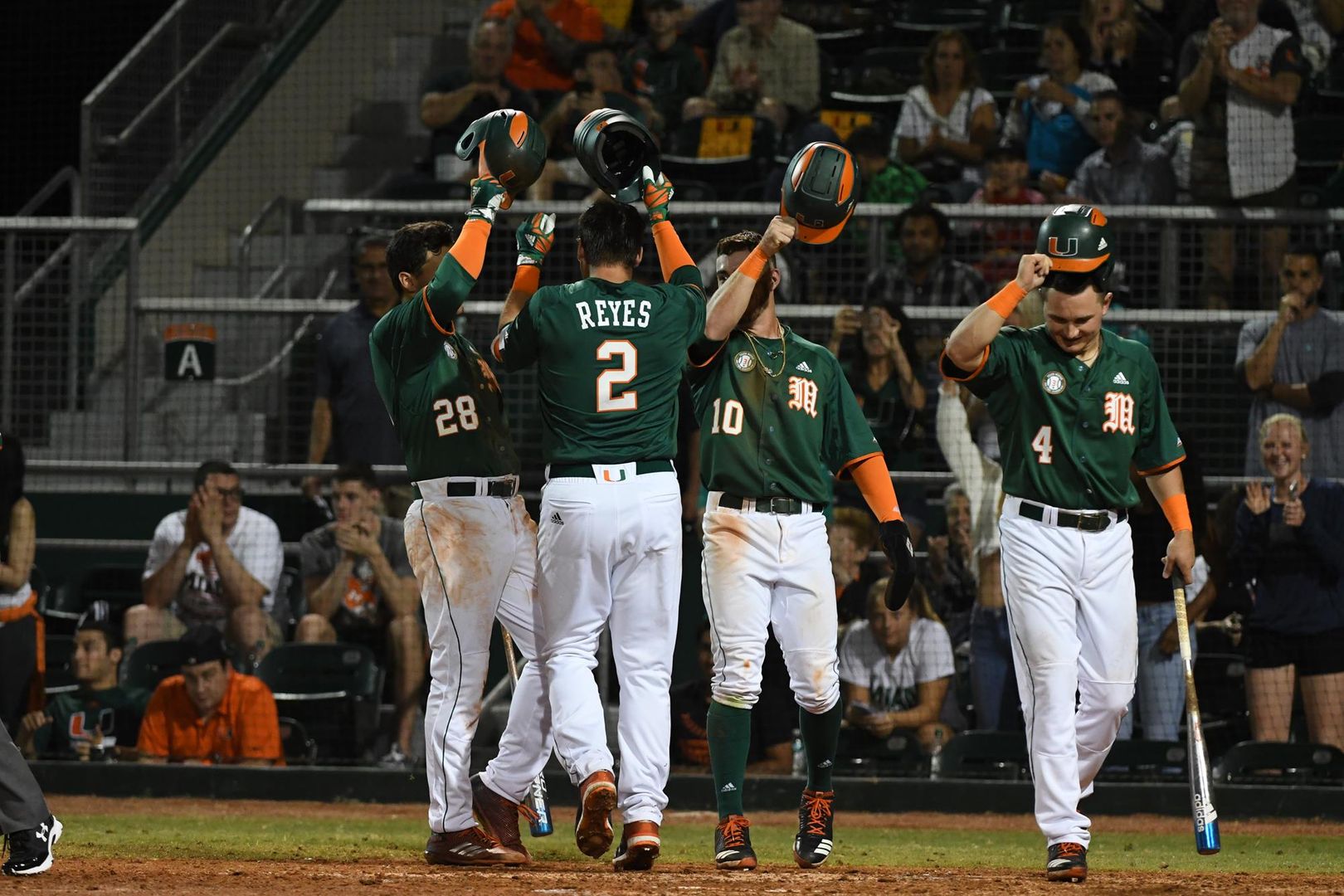 CORAL GABLES, Fla. – It was the 25th and final University of Miami Opening Day for an emotional Jim Morris but the first for several of his wide-eyed Hurricane newcomers.

Junior transfer Danny Reyes slugged a two-run home run in his UM debut, Miami started an all-freshman infield, and the Hurricanes (1-0) cruised to a 7-1 win over Rutgers on the first day of college baseball.

With his commemorative “final season” logo painted behind home plate and adorning the Hurricanes’ green jerseys, Morris was celebrated during pregame introductions and throughout the game with video messages saluting the veteran skipper.

“First of all, that was an exciting game with a great crowd,” Morris said. “It’s fun to come back, turn the lights on…I asked a few of the new guys, ‘What do you think?’ They’re all very excited.”

Just before first pitch, Rutgers’ coach Joe Litterio even presented a plaque to Morris commemorating his coaching career on behalf of the Scarlet Knights.

But from that point on, the Hurricanes newcomers stole the show.

Trailing 1-0 in the second, Reyes cranked a leadoff double for his first hit as a Hurricane.

Three batters later, freshman first baseman Alex Toral drove in Miami’s first run of the season to tie the game. Redshirt freshman catcher Michael Amditis put Miami ahead for the first time with an RBI groundout and freshman shortstop Freddy Zamora tagged a sacrifice fly to quickly turn a deficit into a 3-1 lead.

One inning later, Reyes earned a standing ovation from the 3,001 in attendance with a towering two-run homer to left center that scored Romy Gonzalez. The no-doubt blast off Rutgers starter John O’Reilly (0-1) was his first Division I home run since June 4, 2016; Reyes spent his freshman year at Florida before transferring to Broward College for the 2017 season.

“It’s a blessing to me,” Reyes said. “I’m truly blessed to be here and be a Hurricane. I’m just excited. The nerves were running a little high going into it – that’s normal to me. Once I got the first hit, I felt right at home. I felt good, ready to go, and ready to compete.”

Not to be outshined by his younger teammates, senior lefthander Jeb Bargfeldt – a second-team All-ACC selection a season ago – pitched five strong innings and allowed just one run.

“You feel great going into the season, and you’ve had these expectations, but to come out, and get a ‘W,’ and start out on the right track, and perform well as a team, it makes it all feel better,” Bargfeldt said.

Bargfeldt scattered six hits with one walk and five strikeouts to pick up the win, giving way to another freshman, righthander Daniel Federman, to start the sixth.

“We started six freshmen and Reyes, who’s a rookie for us,” Morris said. “Seven out of nine players were new. That was for sure the most in my entire career, I can’t remember anything quite like that. It was fun to watch.”