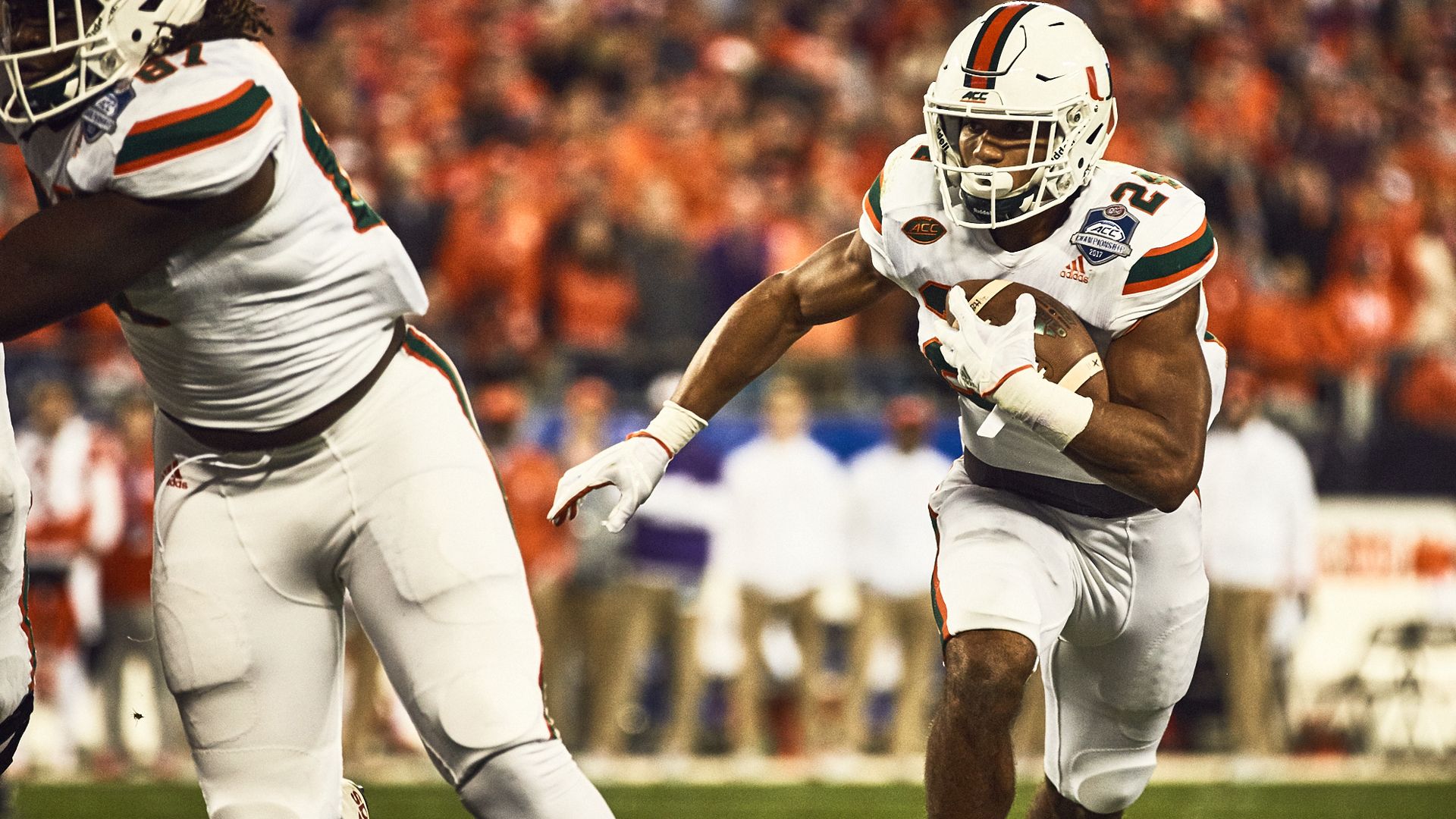 No. 7 Miami Falls to No. 1 Clemson in ACC Championship

CHARLOTTE, N.C. – The University of Miami fell in its first appearance in the ACC Championship Game, dropping Saturday’s matchup to Clemson, 38-3.

In a game that figured to have College Football Playoff implications, the No. 1 Tigers (12-1, 7-1 ACC) made the most of every opportunity that presented itself at Bank of American Stadium and proved to be too much for No. 7 Miami (10-2, 7-1 ACC).

The Tigers showed why they were the top-ranked team in the country entering the game, engineering a 10-play, 68-yard scoring drive on their opening possession that ended in a four-yard touchdown run by Travis Etienne. Clemson quarterback Kelly Bryant was a major contributor on the opening drive, completing all four of his pass attempts for a total of 48 yards while adding 11 yards on three rushes to help the Tigers take a 7-0 lead less than five minutes into the game.

After punting on fourth-and-six from the UM 29, the Canes caught a break. Clemson punt returner Ray-Ray McCloud fumbled a Zach Feagles punt that was recovered by Miami’s Trent Harris that gave Miami the ball at the Clemson 37 with a fresh set of downs. Harris’s fumble recovery gave him the honor of wearing Miami’s turnover chain for the first time this season, becoming the 16th different Hurricane to cause a turnover in 2017. The momentum would be short-lived, as the Canes could not enter the red zone and senior kicker Michael Badgley’s 46-yard field goal attempt missed wide left.

Miami nearly took the ball away again on Clemson’s ensuing possession, as UM safety Sheldrick Redwine forced McCloud to fumble after a 25-yard gain on a completion over the middle from Bryant. Sophomore corner Malek Young dove for the bouncing ball, but was unable to reel it in and Clemson’s Milan Richard recovered it to maintain possession and give the Tigers the ball on the Miami 27. Clemson capitalized on the second chance, as Bryant rushed for an 11-yard touchdown five plays later to give the Tigers a 14-0 lead with 3:02 remaining in the first quarter.

Clemson’s lead grew to 21 early in the second quarter, as redshirt junior running back Adam Choice punched the ball in from a yard out to wrap up a nine-play, 41-yard scoring drive that gave the Tigers a 21-0 lead with 12:49 left in the half.

Bryant was unstoppable through the air for much of the first half, completing his first 15 pass attempts for 164 yards. The junior set a new ACC Championship Game record for consecutive completions before missing receiver Deon Cain on first-and-10 from the Clemson 49 on his 16th attempt. Three snaps later Clemson punted for the first time, failing to convert on third down after doing so on their first seven third downs against Miami.

Miami’s offense was stymied in the opening 30 minutes. The Hurricanes gained just 64 yards of total offense and failed to enter the red zone on any of their six possessions. Five the six drives ended in punts, due largely to Miami’s struggles on third downs. While Clemson converted seven of nine third downs, the Hurricanes could only convert on two of eight third-down situations.

Clemson added three more points on its first possession of the second half, as Alex Spence converted a 46-yard field goal to give the Tigers a 24-0 lead with 10:14 to go in the third quarter. Miami held Clemson to the field goal thanks in part to a sack of Bryant by freshman safety Amari Carter on third-and-five from the Miami 24.

The Hurricanes opened the next possession on their own 26, and quarterback Malik Rosier hit freshman wideout Jeff Thomas for an 18-yard gain on first down. But cornerback Ryan Carter, who was beaten on the play, forced a fumble that was recovered by linebacker Dorian O’Daniel and gave Clemson the ball on the UM 47.

Miami’s defense answered to the sudden change, forcing a three-and-out that was punctuated by a sack by sophomore defensive lineman Joe Jackson on third-and-five from the Miami 42. The possession got off to a nice start, with Rosier hitting Braxton Berrios for a 14-yard gain. But three plays later, Rosier was intercepted by Carter on a pass that bounced off the fingertips of receiver Darrell Langham and into the arms of the veteran defensive back at the Miami 43.

Clemson capitalized off their second forced turnover on consecutive drives, charging 43 yards over six plays to score a touchdown and increased their lead to 31. The scoring drive was capped by an 11-yard touchdown run by sophomore running back Tavien Feaster. The touchdown was Clemson’s fourth rushing score of the game and each came by a different Tigers player.

Miami’s offense got a spark on the next drive, as freshman DeeJay Dallas rushed for 20 yards on two carries as a wildcat quarterback. The versatile freshman was Miami’s leading rusher against Clemson, picking up 44 yards on six carries.

But the Tigers would force another turnover, picking off Rosier when Dexter Lawrence tipped a pass that landed in Kendal Joseph’s hands and the linebacker returned it 37 yards to the Miami 13. Rosier finished the game 14-of-29 for 110 yards and threw two interceptions.

The ball continued to bounce Clemson’s way, as Miami defensive lineman RJ McIntosh forced a fumble on the Tigers’ first play following the interception but the ball was recovered by Tremayne Anchrum to keep the ball in Clemson’s hands. One play later, Bryant hit Deon Cain for a 27-yard touchdown to make it 38-0. The junior quarterback finished the night completing 23 of 29 pass attempts for 252 yards and a touchdown.

Badgley hit a 22-yard field goal with 3:29 left in the game to get Miami on the scoreboard and avoid a shutout.

Defensively, linebacker Shaquille Quarterman led Miami with 10 tackles (five solo) and had 1.5 tackles for loss. The Canes recorded four sacks on the night, with Chad Thomas, Joe Jackson, Michael Jackson and Amari Carter each bringing down the opposing quarterback, while Miami combined for 10 tackles for loss.