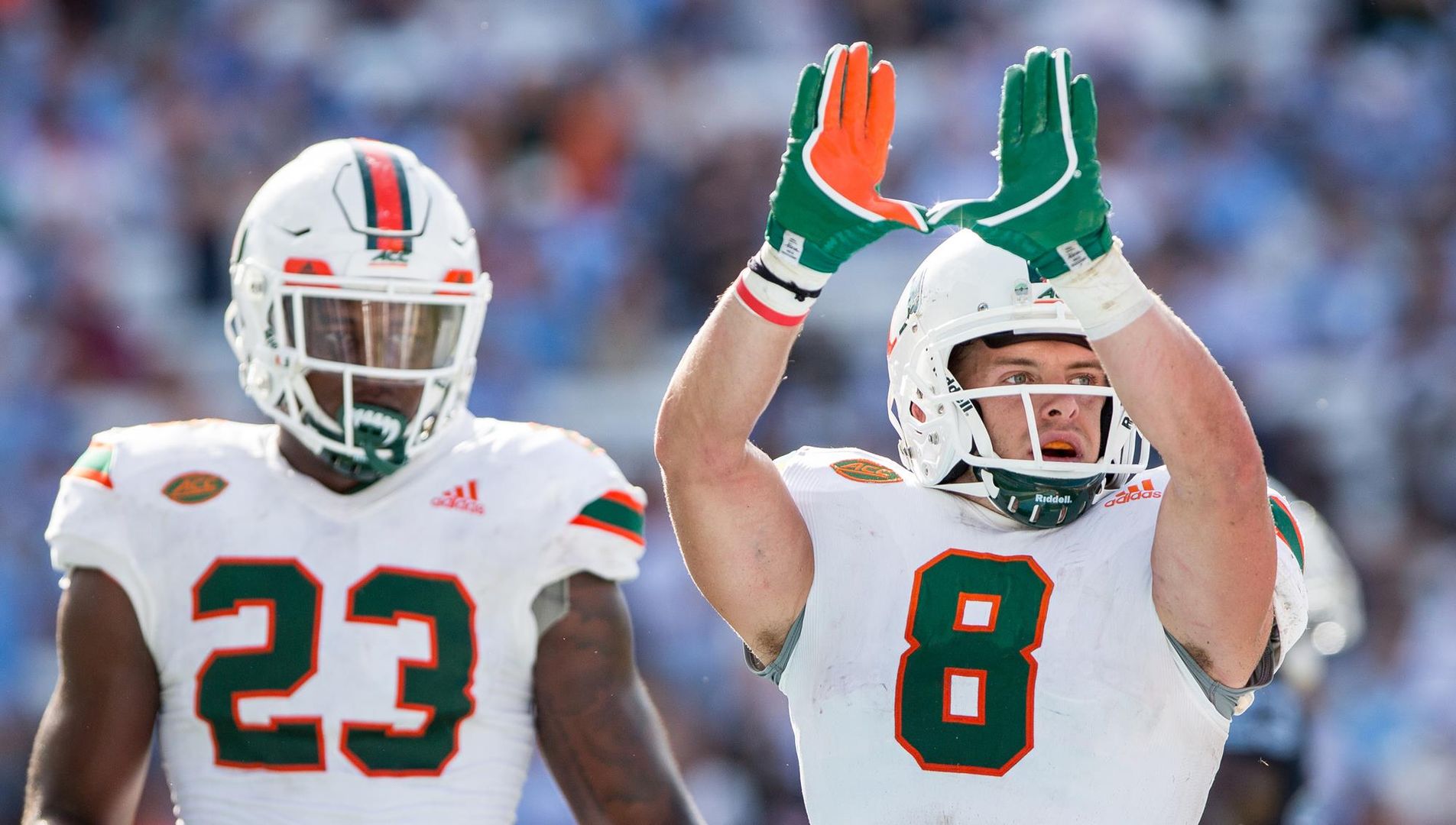 CHAPEL HILL, N.C. – The Miami Hurricanes came into Kenan Memorial Stadium on Halloween weekend and had to go through Larry Fedora’s entire bag of tricks before coming away with a treat.

Miami entered Saturday’s game as a heavy favorite, but the Tar Heels made the Canes work hard for four quarters to earn their seventh straight victory of 2017.

“North Carolina obviously played a great game today,” Miami head coach Mark Richt said. “We give our salute to them and coach Fedora and his staff. They did a super job of getting ready for this game. A lot of big things happened. Offensively for us, it’s really the big plays that made it for us. We did not really sustain a drive really that I can remember, but we did have some deep ball shots and some plays that had some big gains. That’s great to be explosive enough to have those types of plays but we just weren’t consistent again when it comes to the little things.”

The Tar Heels controlled much of the first half, racking up 248 yards of offense, but Miami’s defense stepped up in key moments to keep UNC out of the end zone. North Carolina’s second possession of the game got off to a strong start, as running back Jordon Brown sprinted for a 56-yard rush down the left sideline on the opening play of the drive. Four plays later, UNC quarterback Chazz Surratt hit wide receiver Dazz Newsome for a 23-yard gain to the Miami 1, but the Canes held strong.

Linebacker Michael Pinckney and defensive tackle RJ McIntosh stuffed Brown just shy of the goal line on first and second down. Surratt couldn’t connect with Newsome in the end zone on third down and Fedora’s decision to go for it on fourth down ended with a 10-yard sack of Surratt by sophomore linebacker Shaquille Quarterman and a turnover on downs.

“That early goal line stand was huge,” Richt said. ” As it turned out, it was probably the difference in the ball game. You can’t blame them for going for it on fourth down down there when it looked like they scored and then they didn’t. Instant replay allowed us to play another snap and we played enough snaps to get a stop there, which was wonderful, to keep points off the board.”

UNC used some trickery to get deep in Miami territory on its next drive. One snap after Surratt was knocked out of the game by a big hit from linebacker Zach McCloud, a double reverse put the Tar Heels in the red zone. Wide receiver Anthony Ratliff-Williams connected with quarterback Nathan Elliott for a 33-yard gain to the Miami four. Three plays later, Freeman Jones converted a 24-yard field goal attempt to put UNC ahead, 3-0, with 4:52 remaining in the first quarter.

North Carolina appeared poised to add three more points when Jones lined up for a 42-yard field goal attempt, but the Tar Heels ran a fake. Holder Manny Miles’ pass to Brandon Fritts went for five yards, but Quarterman stopped the junior tight end well short of the 19 yards needed to extend the drive and the Canes took over the ball at their own 20.

Jones converted a career-long 45-yard field goal attempt to punctuate a nine-play, 53-yard scoring drive on North Carolina’s next possession to put the Tar Heels up, 6-0, with 3:48 remaining in the first half.

Miami’s offense broke through just before halftime, as Rosier hit tight end Christopher Herndon IV up the seam for a career-long 51-yard touchdown reception. The senior tight end caught the ball about 20 yards from the line of scrimmage and spun out of a tackle before sprinting to the end zone to put the Canes ahead, 7-6, with 1:58 left in the first half.

The Hurricanes converted three of nine third downs and managed just 167 yards of offense in the first half. But Miami’s defense wreaked havoc behind the line of scrimmage, finishing the half with six tackles for loss and a pair of sacks. McIntosh set a career-high with 10 tackles in the opening half and finished with 11 stops and a pass breakup on the day.

“I think we are playing good,” McIntosh said. “There are some things we need to work on, but I think if we continue to strive to get better then I think we will get better.”

The Canes wasted no time finding the end zone again in the second half, as Rosier hit freshman wide receiver Jeff Thomas on the first play from scrimmage for a career-long 78-yard touchdown. The pass was Miami’s longest of the season and gave the Hurricanes a 14-6 lead.

Jonathan Garvin gave the Canes some momentum with 11:03 remaining in the third quarter. The freshman rammed into the wedge and extended his arm to block a punt that gave Miami the ball on the UNC 13. Four plays later, Michael Badgley hit a 21-yard field goal to put Miami up, 17-6.

Fedora pulled out another trick play with just under eight minutes remaining in the third quarter, as Elliott threw a backwards pass to Ratliff-Williams who tossed an 18-yard touchdown to freshman Beau Corrales in the end zone that cut Miami’s lead to four, 17-13.

The Tar Heels were threatening to score again on their next possession, reaching the Miami 38, but Michael Jackson picked off an Elliott pass at the Miami four to give the Hurricanes the ball and earn the right to wear the turnover chain for the fourth time this season.

Miami broke out the turnover chain again the next time its defense hit the field, as linebacker Charles Perry picked off Elliott on UNC’s first play of the drive to give the Canes the ball on the North Carolina 44.

The Canes could not turn the consecutive turnovers into points and entered the fourth quarter with a 17-13 lead.

Freshman DeeJay Dallas gave Miami a boost, hauling in a short pass from Rosier and juking a defender before racing 49 yards to the UNC 5. Two plays later, North Carolina native Braxton Berrios snared a five-yard touchdown pass to put the Canes up 11, 24-13.

“We came up here two years ago and we got embarrassed, utterly embarrassed,” Berrios said. “You can lose a game, but when you get disrespected like that it sticks with you for a while. I told my wide receiver group, if I got in I was going to make sure that ‘U’ was held up properly.”

The Canes picked off Elliott for the third time, as safety Sheldrick Redwine snared a pass on the sideline at the UNC 32 and returned it to the 15 to put Miami in prime position to add to its lead. But Miami gave the ball right back when J.K. Britt intercepted Rosier on second-and-28 from the UNC 33 to stymie the threat. Rosier finished the game with a career-high 356 passing yards, completing 16 of 38 attempts for three touchdowns and an interception.

The Tar Heels cut Miami’s lead to five when Corrales scored his second touchdown of the day, snagging a nine-yard pass in the end zone from Elliot. UNC could not convert a two-point conversion attempt and trailed Miami, 24-19, following the score. Corrales, who entered the game with two catches in his career, finished the day with four catches for 64 yards and a pair of touchdowns.

North Carolina got a big boost when Aaron Crawford recovered a Travis Homer fumble on first-and-10 from the UNC 44. The Tar Heels offense began the ensuing drive on its own 48 and had 2:56 remaining in the game.

A personal foul by McCloud moved UNC into Miami territory, as the sophomore linebacker hit Elliott out of bounds to tack on 15 yards to Elliott’s five-yard rush. But Miami caught a break, as sophomore Joe Jackson stripped Brown on the next play and the fumble was recovered by Jaquan Johnson to give Miami the ball on its 34 with 2:11 remaining in the game.

“I was tired and we had to go back in and make another big stop,” Jackson said. “We’ve been in these situations before. It was nothing amazing really. I did my assignment and did what I was supposed to do and he came over and I just happened to make the play.”

Rosier rushed for seven yards to convert a third-and-five from the Miami 39 to seal the victory for Miami. North Carolina used its final timeout after Miami’s next play and the Canes ran out the clock to get out of Chapel Hill, N.C. with a win.

Miami is back at Hard Rock Stadium next Saturday for a matchup against the Virginia Tech Hokies. Click here for ticket information.