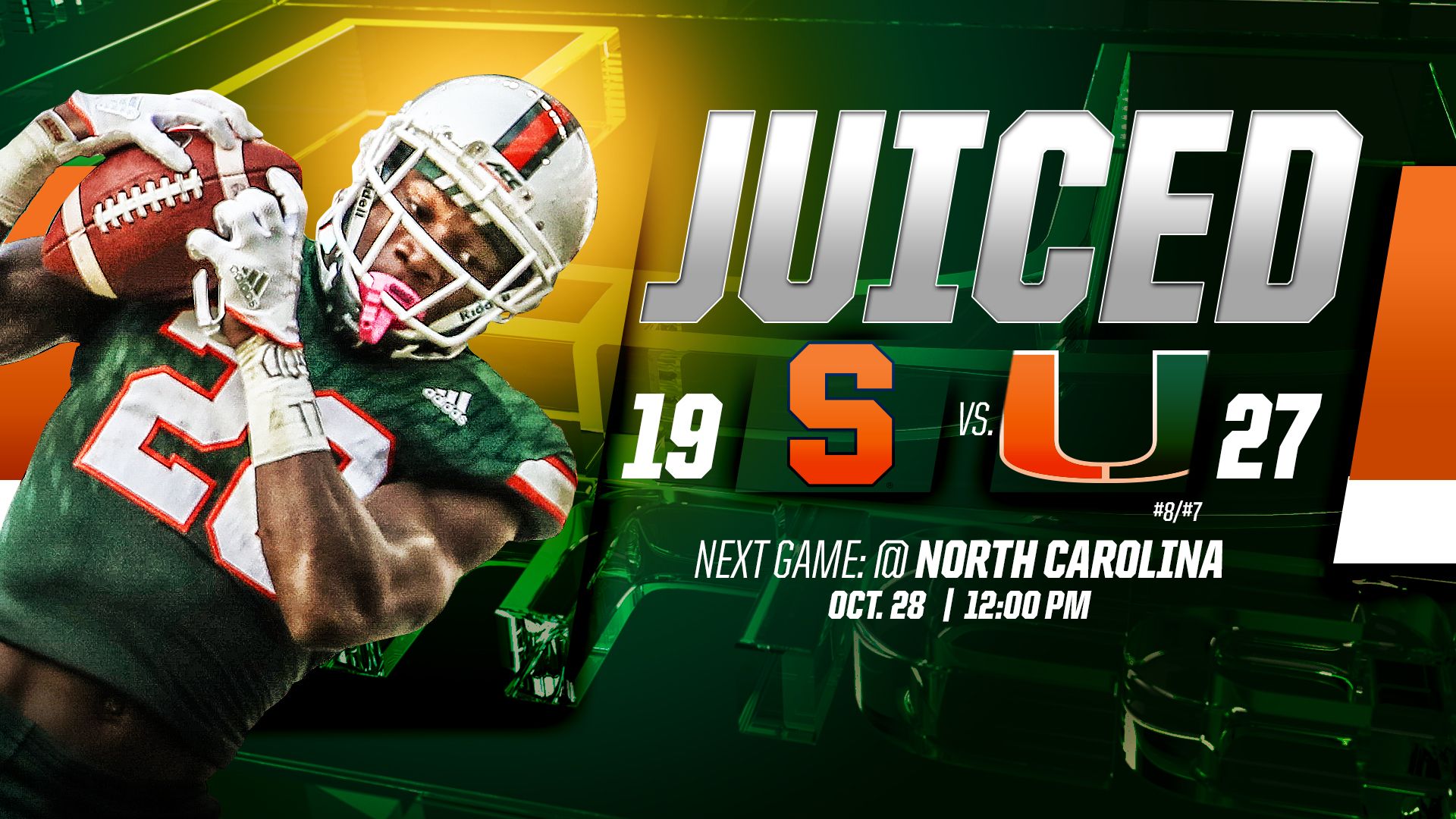 “We found another way to make it really exciting,” Miami head coach Mark Richt said. “Part of the reason was Syracuse is a really good football team. We’ve seen what they can do, especially last week with Clemson, but everybody that’s played them this year has been just talking about them and how much harder they’re playing now and with a purpose now. Not that they didn’t last year, but they’re a better team from what people say, from a year ago. It’s a tribute to what Coach [Dino] Babers is doing over there.”

56,158 fans witnessed Miami maintain its unblemished record and improve its current winning streak to 11 games dating back to October 2016. The Hurricanes have won 11 consecutive games for the first time since 2002.

With an electric offense loaded with playmakers, Miami’s defense would have to step up to the challenge if the Hurricanes were to be victorious and that is exactly what Manny Diaz’s defense did in the opening half.

Syracuse quarterback Eric Dungey entered Saturday’s game ranked fifth in the country in pass completions. Dungey had connected on 188 of his 293 pass attempts with just four interceptions thrown this season. But that was before he faced the Hurricanes’ defense. Miami doubled the junior’s total in the first half, picking Dungey off four times.

Saturday marked the first time Miami has recorded four interceptions in a game since a matchup with Savannah State in 2013. Miami’s four forced turnovers were the most since forcing four at Virginia in last year’s trip to Charlottesville.

Dungey was intercepted early in the first quarter when defensive tackle RJ McIntosh tipped a Dungey pass and defensive end Demetrius Jackson snagged it out of midair. Dungey stripped Jackson to get the ball back for the Orange, but his next two picks resulted in points for Miami.

The Hurricanes intercepted Dungey for the second time in the game when Michael Jackson picked a wobbly pass to the left sideline with 2:04 left in the first quarter. Jackson, who also had a pick at Florida State, donned Miami’s turnover chain for the second time this season. The junior corner picked off Dungey again with 1:27 left until halftime, becoming the first Hurricane with multiple interceptions in a game since Artie Burns had two against Virginia Tech in 2015.

“It brought a lot of excitement,” Jackson said of the turnover chain. “We’ve seen pictures of people in like South Carolina and other places, and even players in high school games wearing chains, so I feel like we started something.”

The momentum stayed on Miami’s side, as the Canes drove down the field to find the end zone for the first time Saturday. Malik Rosier hit Christopher Herndon IV for a 35-yard gain to put the Hurricanes at the Syracuse 21-yard line. The pair connected three plays later for a 10-yard touchdown that put Miami up, 10-0, with 14:22 left in the first half.

“A lot of our stuff is just based on what the defense gives us and he does a great job running his routes,” Rosier said. “He gets to his depth, he runs with speed and he’s physical. He fights for yards after the catch. Chris is one of those guys that, when it comes down to it, if I throw it to him, I know he’s going to be in the right spot.”

Herndon was outstanding for Miami, setting a new career-high with 96 receiving yards on a career-best 10 receptions. The senior totaled 91 receiving yards in the first half, besting his previous high for a game (66) set vs. Georgia Tech in 2015.

“They like to get me going early,” Herndon said. “I think the coaches know that once they get me going, it’s hard to stop me. So I guess they saw that early and kept feeding me the ball and it was working.”

Jaquan Johnson dove and caught a deep ball thrown by Dungey with 13:31 remaining in the half to give Miami the ball on its own 38. Rosier completed three straight passes, including a 21-yard gain that ended with Ahmmon Richards hurdling over defensive back Rodney Williams, to reach the Syracuse 29. Michael Badgley, who opened the scoring with an 18-yard field goal with 7:25 to go in the first quarter, converted a 39-yard attempt that put the Canes ahead, 13-0, with 10:41 remaining in the opening half.

“I wasn’t really thinking about it,” Richards said. “When I saw him, he was just sitting flat-footed, so I knew he was going to take a shot at me. I was already running full speed, so I just hurdled him.”

The Orange got on the scoreboard with a 22-yard field goal by Cole Murphy with 6:19 remaining in the opening half. Syracuse converted a third-and-25 when Dungey hit Ervin Philips for a 27-yard gain to the Miami 39 and extend the drive. A 20-yard run by Dontae Strickland put Syracuse inside the red zone at the Miami 16, and seven plays later Murphy’s kick parted the uprights.

The Hurricanes became the first ACC team this year to hold Syracuse without a first-half touchdown, but the Orange offense would pick up the pace in the second half and finish the game with 93 plays run on offense.

“It was challenging,” linebacker Michael Pinckney said of stopping Syracuse. “They were a tempo offense. We tried to simulate it in practice, but it’s pretty hard to do. We’ve just got good backups; your team is based off your backups. So, I felt like we did what we had to do tonight.”

Murphy hit his second field goal, a 40-yard attempt with 8:55 left in the third quarter to open the scoring in the second half, but Miami answered in a big way.

After forcing a punt on Syracuse’s next drive, Rosier hit freshman Jeff Thomas for a 48-yard touchdown that put Miami ahead, 20-6, with 2:51 left in the third quarter. The speedy Thomas has been a big play threat in consecutive weeks for Miami, recording a career-best 70-yard reception a week ago against Georgia Tech and scoring his first touchdown as a Hurricanes Saturday.

Rosier had an impressive performance, finishing 26-for-43 for 344 yards and two touchdowns with zero interceptions. He has thrown at least one touchdown in every start of his career and multiple touchdowns in six of seven career starts.

The Orange offense countered with back-to-back scoring drives for 10 points. The first was a six-play, 65-yard drive that took just 1:43 before running back Moe Neal dashed into the end zone from 15 yards out to make it 20-13, Miami. On their next possession, Murphy hit his third field goal of the game, a 45-yarder, to bring Syracuse within four, 20-16.

The Canes called timeout with 7:22 remaining in the game, looking at a fourth-and-3 from the Syracuse 31. With the field wet from rain earlier in the day, Richt elected to go for it but the Hurricanes could not convert. Rosier fired a pass low to Darrell Langham, but the hero of the last two weeks could not corral the ball and Syracuse took over on its own 31.

“You saw [Badgley] slip at least twice on kickoffs,” Richt said. “I told him that, too. I said, ‘Look, I’ve got all the faith in you to make that kick from that distance, but we’re just slipping too much.’ I couldn’t afford for him to slip, bang it into the line of scrimmage, they scoop and score and they’re having a party now. I couldn’t do that. And then the other thing, we had a 3rd and six, seven, eight or nine, whatever it was, we ran the ball and everyone booed. I don’t blame them. We didn’t get any yards. My plan was to go for on it on fourth down at that time too, and hopefully just run the ball get three or four or five yards and make it 4th and manageable, but it become 4th and 8 or 9.  I’m like, ‘Forget it, we’ll punt.’ We got them down on the 2 [-yard line], which was good. Sometimes moving the field position isn’t real exciting but when you have an effective offense like they have, if you make them drive 90 or 95 yards, it’s tough.”

Syracuse wasted little time getting into Miami territory, as Dungey scrambled for 33 yards on first down to the Hurricanes’ 37. But Miami’s defense stifled the threat, thanks in part to a six-yard tackle for loss by Pinckney, holding the Orange to a 53-yard field goal by Murphy that kept the Hurricanes ahead by a point, 20-19.

“We’ve got to be consistent all four quarters,” Pinckney said. “On my end, I probably didn’t do everything I could’ve done, tried as hard as I could. Just as a whole, [for the whole] four quarters, we have to be consistent more. It was going back and forth. The offense was really good and the defense was slacking a little bit. Then, vice versa. I just feel like, as a team, if we can do it, we could be unstoppable.”

Langham rose to the occasion on the next drive, snagging a 19-yard pass from Rosier on second and 10 from Miami’s 28 to give the Canes a spark. Six plays later, Travis Homer scampered 33 yards for a touchdown that gave the Hurricanes an eight-point lead, 27-19, with 2:48 to go. The sophomore finished the game with 95 yards on 20 carries and a touchdown.

“I couldn’t do anything without my line,” Homer said. “All props go to them. They gave me a nice hole and all I did was run fast.”

Dungey, who finished the game 13-for-41 for 137 passing yards and four interceptions, was sacked four times. Pinckney led the Canes with nine tackles and 2.5 sacks, helping Miami tally 9.0 tackles for loss against the Orange. Defensive lineman RJ McIntosh had a career-high five pass breakups.

The Orange’s second half offensive outburst was done largely on the ground. After Miami held Syracuse to 75 rushing yards over the first 30 minutes of play, the Orange exploded for 189 yards rushing and had both Dungey (100) and Strickland (105) finish with 100-yard rushing performances.

“Thrilled about the victory,” Richt said. “Just inconsistent effort offensively. Defensively, there were some really bright spots and some not-so-bright spots. Their quarterback is as tough as they come. He’s a great runner, he’s a great leader. He’s as tough as he can be. We had a tough time getting him on the ground at times. He extended plays and kept drives going for them, with his wheels and with his arm. He’s one of the better quarterbacks we’ve played in a while.”

Miami hits the road next weekend to play at North Carolina. Kickoff is set for noon.