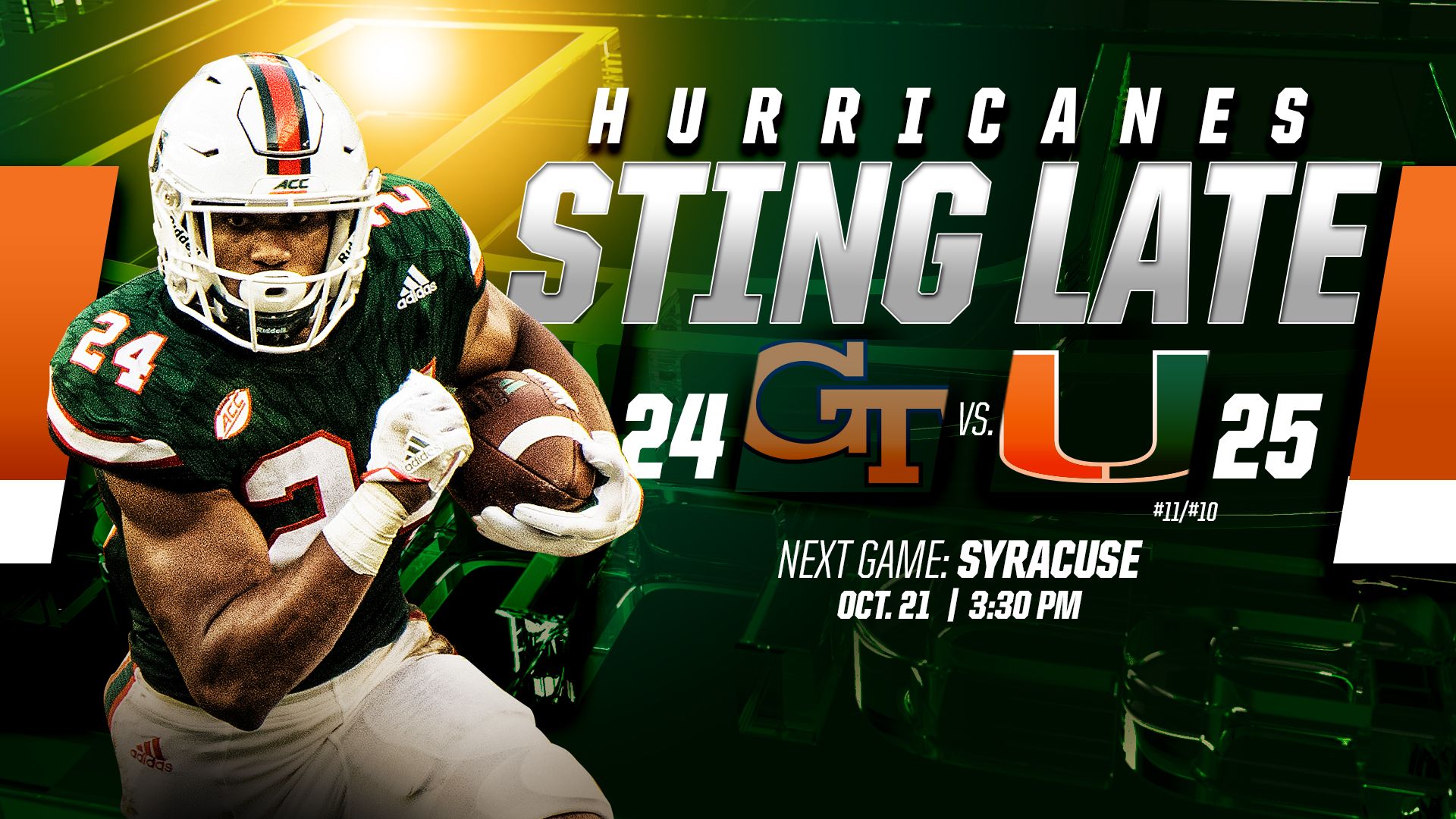 MIAMI GARDENS, Fla. – Darrell Langham has a flair for the dramatic.

A week after the redshirt junior scored the game-winning touchdown with six seconds left at Florida State, Langham hauled in a pass on fourth-and-10 from the Miami 43 and turned it into a 28-yard gain for a first down and gave the Hurricanes life.

“Just another day in paradise,” Miami head coach Mark Richt said. “That’s how we roll, I guess. What a wonderful victory for our team, our program, our fans, our university. Definitely our hats are off to Georgia Tech and how they played. They certainly played good enough to win, as well. It was just one of those games where somebody had to lose. I don’t know. We did what we had to do win – we just kept fighting and believing and scrapping. And that’s a tremendous trait for a football team. Because there’s many times we could have sacked our bags and put our heads down and started feeling sorry for ourselves, but we never did that. It’s just a tribute to our players and our leadership of the team and the coaches. Everybody. There’s something going on that’s really good right now. Who knows where it’s going to go from here? I have no idea. The train could come off the tracks at any time. That’s just the way football is. To do what we did two weeks in a row was pretty darn good. I’m really proud of everybody.”

While the Hurricanes’ final drive began with 2:30 left in the game, Miami’s surge began at the start of the fourth quarter. A downpour began falling just as the final 15 minutes of play were set to begin, and the 55,799 fans in the stands began to roar.
“We feed off of them like we feed off of each other,” linebacker Shaquille Quarterman said. “When we go for a drive, a drive is about to start and the crowd is really into it, they’re really helping us out. You don’t know what that’s doing to the offense that we’re going against. It may throw off their cadence and all that. A couple times it did throw off their cadence. So, we just really love that and we just love our fans and they love us.”

The Canes used the energy coming from their orange and green-clad fans, charging down the field for a six-play, 75-yard scoring drive that ended with a 27-yard Homer touchdown. Miami went for two, but failed to convert and the Canes trailed the Yellow Jackets, 24-22.

Homer was outstanding in his first career start for the Hurricanes, finishing with a career-high rushing 170 yards and a pair of touchdowns, one rushing and one receiving. The sophomore running back averaged 8.5 yards per carry against the Yellow Jackets on Saturday.

“Awesome,” Richt said of Homer’s performance. “I don’t know how many carries it was, but he had 170 yards, I saw. We talked about his conditioning – he still played some special teams, he was still covering some kicks – but he has get vision and quickness. He secured the ball extremely well. I don’t think we had a fumble the whole day. Our line was playing a little bit mad. They had some comments made by the opponent that didn’t really sit well with them. And I think our line really came to play and did a great job of moving people and creating space. Other than the blitzes, we really protected pretty good today, too. It just didn’t show up a couple times…they got us more schematically than it was guys just getting whipped.”

Miami’s outstanding fourth quarter was preceded by three quarters of strong play by Georgia Tech. The Hurricanes scored first, with Badgley hitting the first of his four field goals on the day to put the Canes up, 3-0.

But Georgia Tech’s triple-option offense responded with a pair of touchdowns by J.J. Green to take a 14-3 lead. The first was a five-yard run to cap a seven-play, 76-yard drive, while the second was a result of some good luck.

The Yellow Jackets increased their lead to 11 when quarterback TaQuon Marshall evaded the Miami rush and threw a pass to Green just before a Hurricane defender could bring him down and Green hauled in the desperation lob for a three-yard touchdown.

The Hurricanes got going on the ground in the second quarter, as quarterback Rosier rushed for 13 yards and Homer followed with a 32-yard run to the Tech 20-yardline. Badgley hit his second field goal of the game, a 32-yarder, to bring the Canes within eight, 14-6.

Miami found the end zone with 12 seconds left in the opening half, when Homer caught a pass from Rosier and sprinted in for six points from 17 yards out to send the Hurricanes into the locker room down, 14-13. Rosier finished the game completing 23 of 37 pass attempts for 297 yards and a touchdown.

“I just tell the guys to give me time,” Rosier said. “Receivers run the right routes. Backs to get out. – I’m not trying to do anything more than what I’m coached to do and coaches are doing a great job at putting me in the right situation at the end of the game to make the game-winning drive.”

The Hurricanes tried to catch the Yellow Jackets off guard with the opening kickoff of the second half, but things did not go as planned. Badgley kicked onside towards wide receiver Braxton Berrios, who was waiting for the ball to travels the required 10 yards before recovering it, but Lamont Simmons cut the ball off and sprinted 42 yards to the end zone for a touchdown to put Georgia Tech up 21-13.

“If we executed it properly, it was there,” Richt said. “They kind of bunched their guys. We line up our guys a certain way. When they line up a certain way, we see that if we pop it into a certain spot, Berrios is running down the field, he’s supposed to catch it on the run, was what was supposed to happen. We didn’t kick it far enough. So Berrios is kind of hoping and praying the thing goes far enough to get on it and it never did. And in doing so, Berrios is kind of waiting past the line cause it has to go 10 yards, so he’s waiting like, ‘please come so I can get on it’ and it never got that far. That’s why he was out of position, and they did a beautiful job of scooping it up and scoring. It was a gift, but it was a calculated risk that we felt was there and there’s a way to call it off if the look’s not right. The look was right, we just didn’t execute and it put us in a bad situation.”

The Yellow Jackets added a 31-yard field goal by Brenton King to go up, 24-13, but Miami charged back when Rosier hit freshman Jeff Thomas for a career-long 70-yard gain that was the Canes’ longest passing play of the 2017 season. Three plays later, Badgley hit his third field goal of the day to bring the Canes within eight, 24-16.

Miami’s defense was outstanding, holding Georgia Tech to under 281 yards of total offense for the game. The Hurricanes, who held an opponent under 300 total yards for the first time this season, shut out the Yellow Jackets in the fourth quarter and held them to just 18 total yards over the final 15 minutes.

“When you play them, they stress you across the field and you’re usually happier with them running sideways,” Miami defensive coordinator Manny Diaz said. “But the first drive they kind of had one of their pieces out-leveraging one of our pieces. It took us two drives to adjust to it, which is kind of disappointing on my part; we really should have fixed it after the first drive. But those guys over there know what they’re doing. All you can do all offseason is anticipate what new things they’re going to get you with. To the players’ credit once we fixed it and they understood what was happening, they had the ability to make the necessary adjustments and take that away from them.”

Quarterman and safter Jaquan Johnson tied for the team lead with eight tackles apiece, while the Canes combined for seven tackles for loss and defensive lineman Chad Thomas and linebacker Zach McCloud each recorded a sack.

“Going against Georgia Tech, you have to prepare totally differently than you do any other week,” Quarterman said. “So, we prepared, we prepared and they changed a couple things on us that we hadn’t seen on film. But, like always, we have an awesome staff, we came back, we made some adjustments and everything just started clicking from there.”

The defense’s stout play in the final quarter allowed the Hurricanes’ offense to make up the nine-point deficit it faced, as the Canes outgained the Yellow Jackets, 191-18, and outscored Tech, 10-0. The final drive, which began with 2:30 remaining on the clock, began at the Hurricanes’ 10-yard line.

Rosier led his second straight game-winning drive by using his veterans. The redshirt junior signal caller connected with seniors Berrios and Christopher Herndon IV for a combined seven completions before he found Langham downfield near the right sideline.

The 6-foot-4 wideout reached over Simmons, who was the hero at the beginning of the second half for Georgia Tech, and tipped the ball in the air before corralling it as he was falling to the ground. Langham, who made his first career start on Saturday, set career highs with five receptions and 100 yards.

Badgley’s game-winning field goal was the 69th of his career, putting him just four behind UM’s all-time leader, Carlos Huerta.

“Langham makes a heck of a play, gets us down in range,” Badgley said. “I was confident if we wanted to kick it that—before or after the penalty—I was ready to go for the 65-yarder or whatever it was. But, instead, Langham makes a heck of a play. Heck of a throw from Malik. And we get down, I get a point and nod from the coaches saying we’re going to center the ball, let’s go, time’s ticking, down two. I just wanted to do my job and win this game. So, it was fun.”

With the victory, the Hurricanes have won 10 straight games dating back to last season. The current stretch is Miami’s longest winning streak since they won 10 games in 2003-04.

“This team, what we’ve done this season, it’s just hard work,” Badgley said. “That starts back when after we finished the bowl game and as a team, we got back to mat drills and offseason lifting and conditioning and just coming together as a team. We just have preached ‘hard work and finish’ and so far that’s what we’ve been doing and we’re not going to stop. So, this hard work is going to continue.”