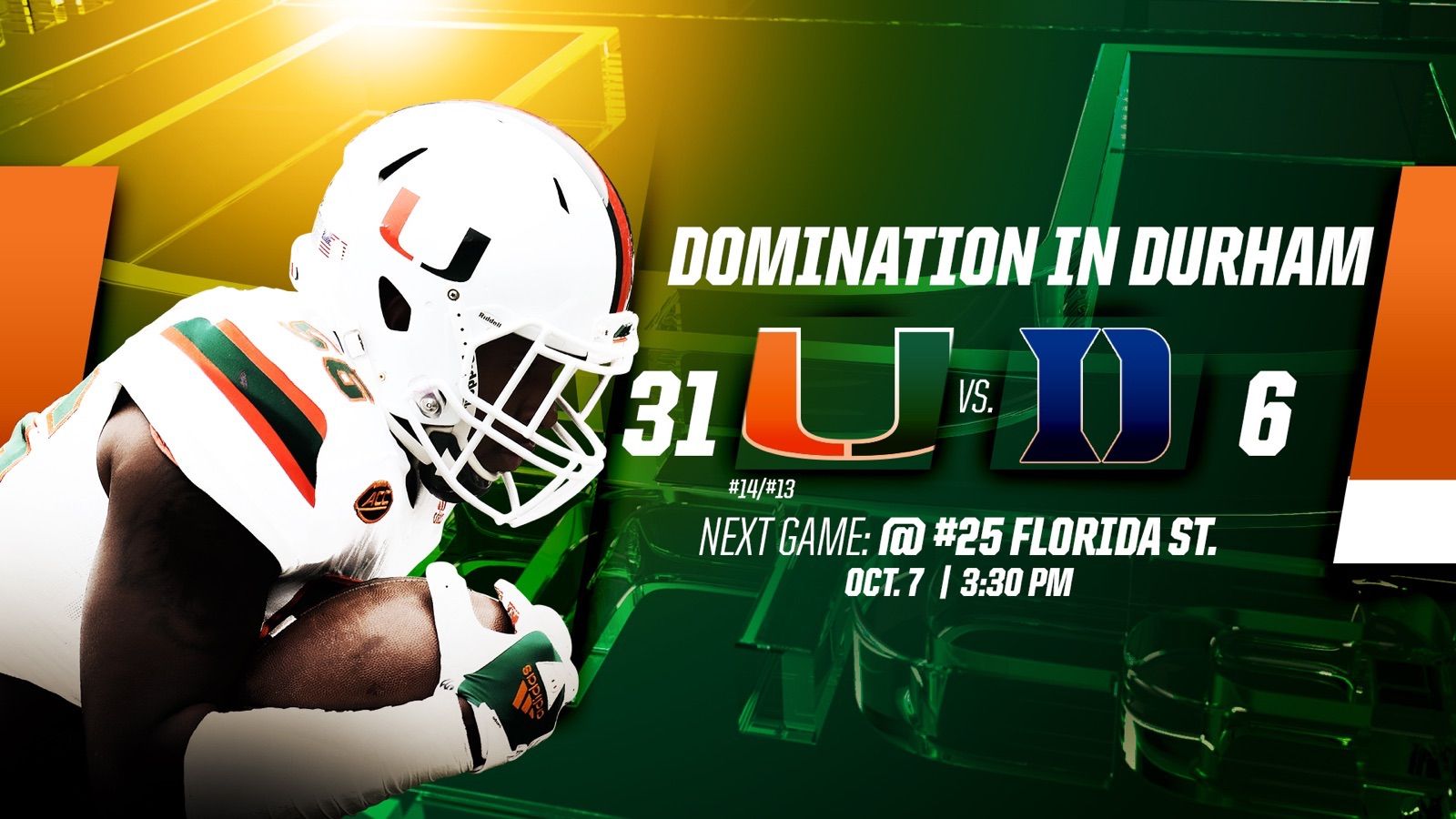 DURHAM, N.C. – A fast start put the University of Miami football team ahead early and the Hurricanes never looked back, winning their ACC opener over Duke, 31-6.

Miami (3-0, 1-0 ACC) returned to Wallace Wade Stadium for the first time since the “Miracle in Durham,” a 30-27 victory in 2015 that was capped by an eight-lateral kickoff return for a touchdown as time expired. But Friday night’s game did not require any late-game heroics, as Miami’s defense made its presence known early and often and the offense scored 14 first quarter points.

“I’m very excited about the victory,” Miami head coach Mark Richt said. “You go on the road in this league against an undefeated team, first league game, to get a victory, no matter how it comes we’re grateful. Take our hat off to Duke and their program. You walk in this place and you see excellence. You see the stadium and the grass, all the new facilities they have and the leadership they have with Coach [David] Cutcliffe, it’s fantastic.”

Duke (4-1, 1-1 ACC) had momentum on its opening drive, thanks in large part to a 20-yard rush by running back Shaun Wilson on third and 19 from the Miami 42 yard line. On fourth-and-1 from the Miami 13, Duke head coach David Cutcliffe elected to forego a field goal attempt and the Hurricanes made him pay, as sophomore Michael Pinckney burst through the Duke offensive line to sack quarterback Daniel Jones for an 11-yard loss and give Miami the ball on their own 24.

“That’s football,” Cutcliffe said. “You think about kicking the field goal right there, just to finish with points. But everything in my book says to go for it. I know how talented they are, and I knew that they would create some measure of points. Thirty-one points is misleading to the people who are going to read about this. It’s one of those tough situations – danged if you do and danged if you don’t. But where we are right now, I don’t know if we can make a field goal anyway.”

The big defensive stop shifted the momentum towards Miami and the No. 14/13 Hurricanes rode that to a score. On second-and-8 from the Miami 36, quarterback Malik Rosier hit running back Mark Walton for a 39-yard gain that moved the Canes into Duke territory. Walton finished with a team-high four catches for 79 yards and added 51 rushing yards on 17 attempts to close the day with 130 all-purpose yards.

Two plays later, Rosier connected with North Carolina native Braxton Berrios for a 27-yard touchdown that put the Hurricanes up, 7-0. Berrios became the first Hurricane to catch a touchdown pass in the first three games of a season since Miami legend Andre Johnson accomplished the feat to open the 2002 campaign.

“It was a beautiful ball,” Berrios said. “We ran a great play and he put it right over the top of that safety. It was a gorgeous play.”

After using just 1:59 on its first scoring drive, the Canes picked up seven more points in just 2:27. Sophomore Ahmmon Richards, who made his first start of the season after missing the first two games due to injury, provided a big spark with a 28-yard gain on his first catch of the year that put Miami at the Duke 39-yard line and Rosier finished off the scoring drive with a one-yard rushing touchdown that put the Hurricanes up, 14-0.

Duke got on the scoreboard with 1:16 remaining in the opening quarter, as Austin Parker converted a 27-yard field goal to cut Miami’s lead to 11, 14-3. The Blue Devils got an assist from a penalty that moved their offense into the red zone. On second and 11 from the Miami 28, junior defensive lineman Kendrick Norton was called for roughing the passer to put Duke at the Miami 14 and give the Blue Devils a new set of downs.

Rosier, who opened the game 9-for-9, finished the first quarter completing all eight of his pass attempts for 155 yards and a touchdown. The redshirt junior did not throw an incomplete pass until there was seven minutes remaining in the opening half, when Walton could not haul in a pass in the flat on second-and-16 from the Miami 23. He finished the game with 270 passing yards and two passing touchdowns, completing 15-of-26 attempts and running for 45 yards and a score on 15 rushes.

“There is a lot of stuff I’ve got to improve on,” Rosier said. “I’ll go back and watch the film. I’m going to get better and I’m going to practice better. We’ve got a big week coming up next week.”

Miami’s turnover chain made an appearance for the third consecutive game when Pinckney picked off Jones at the Duke 41. Junior defensive back Michael Jackson tipped a short pass to the left intended for Johnathan Lloyd and Pinckney dove to snare the ball just before it the ground and collect the second interception of his career.

“I credit that a lot to Michael Jackson, the cornerback,” Pinckney said. “He made a great play on the ball. I just hustled to the ball like we say every week, just being real just all over the field. I made a great play. I’m thankful.”

The Hurricanes charged down the field to get inside Duke’s one-yard line, thanks largely to a 25-yard reception by Berrios, but the Blue Devils held Miami to a 20-yard field goal by Michael Badgley that put Miami up, 17-3, with 3:13 remaining in the opening half.

Parker hit his second field of the night, a 36-yard attempt with eight seconds remaining in the opening half, but the Hurricanes entered the locker room up 11 with 30 minutes left to play.

With less than four minutes remaining in the third quarter, Rosier overthrew Richards and Duke corner Byron Fields, Jr., pulled in his third interception of the season. The turnover gave the Blue Devils momentum and a 28-yard completion from Jones to junior wide receiver T.J. Rahming put Duke at midfield, but Miami’s defense stepped up and forced a punt to quell their drive.

“Unfortunately, we thought Ahmmon was open and he overshot it and got the pick,” Richt said. “His two picks this season have been really good decisions and the ball just went too high. The art of throwing the deep ball, especially the post, is one where you want to drive the ball, you want to throw it relatively flat, but he needs to lay it out there and let the guy run across the field to go get. When you throw it as flat as he did on that one, it’s either perfect or you’ve got problems and that’s what happened. He knows better, he just didn’t throw it like he should have on that one.”

Richards sealed the victory for the Hurricanes, catching a slant from Rosier and taking it 49 yards for a touchdown that gave Miami an 18-point lead, 24-6, with 11:02 remaining in the game. The play also put Richards over 1,000 career receiving yards, sitting at 1,040 yards through 14 collegiate games, and gave him his fifth 100-yard game of his career.

“They sent an all-out blitz on that play,” Richards said. “It’s like a quick, one-step route and they called an all-out blitz, so there was nobody in the middle of the field. When I caught it, I was just thinking about scoring.”

On first and 25 from the Miami 48, sophomore defensive lineman Pat Bethel sacked Jones and forced a fumble that he recovered at the Duke 40-yard line. One play later, with Bethel donning the turnover chain on the sideline, sophomore Travis Homer scurried past the Blue Devils for a 40-yard touchdown run that gave Miami a 25-point lead, 31-6, with 4:48 left on the clock.

Miami’s defense was outstanding against the Blue Devils, shutting Duke out over the final two quarters and holding them to their lowest point total since 2009. Duke failed to score a touchdown for only the second time in the past five years and converted only four of 17 third down plays against the Canes’ defense.

“Our defense gave up some yards and some grass between the 20 yard lines, but when we got in the red zone, we found ways to force field goals and got a couple of turnovers when it really counted the most,” Richt said. “I thought our defense finished extremely well.”

“We got back to the basics of doing what we’re supposed to do and playing to the standard,” Quarterman said. “Maybe the first couple of weeks, since having those high expectations from last season, we felt like we had to play perfect but it’s impossible to play perfect. We went back to just playing hard and playing physical. As long as we do that, we can continue to keep it going.”

Miami is back in action next Saturday, traveling to Tallahassee for a meeting with in-state rival Florida State. The matchup between the Hurricanes and Seminoles is set to kickoff at 3:30 p.m.