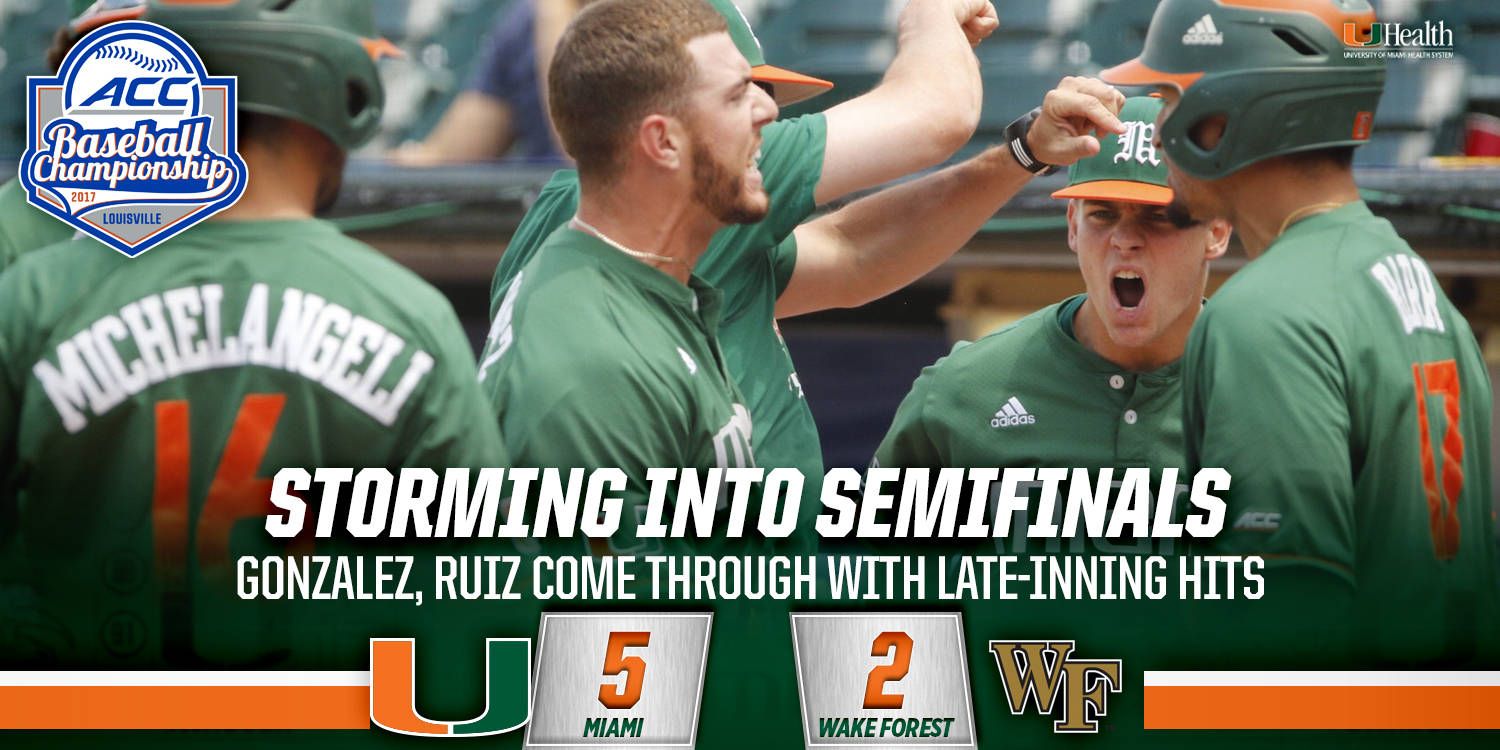 The Hurricanes wiped out a 2-0 deficit and two home runs by the Demon Deacons’ Stuart Fairchild by scoring five runs in their final two at-bats. Johnny Ruiz sparked Miami, scoring the tying run in the eighth inning and delivering a two-run double in the ninth that capped the scoring.

Wake Forest loaded the bases with two outs in the bottom of the ninth. Nick DiPonzio lined a hard shot to the right side, but the ball glanced off Demon Deacon baserunner Keegan Maronpot for the final out of the game.

Miami (31-26) moves on to Saturday’s 5 p.m. semifinal game and will face the Pool B winner – second-seeded North Carolina or seventh-seeded NC State – for the right to play in Sunday’s title game.

Despite the loss, Wake Forest (39-18) remains a prime candidate to host an NCAA regional. The 16 host teams will be announced Sunday night at 8:30 p.m., followed by the unveiling of the entire 64-team field on Monday at noon.

Fairchild opened the scoring in the bottom of the first inning with a two-out solo home run – a gargantuan blast that nearly cleared the left field bleachers and was estimated at 402 feet.

Fairchild struck again in the third inning with another two-out to right field. Friday’s two home runs gave Fairchild 15 for the season, which ranks sixth in the ACC but only third on Wake Forest’s team.

The multi-homer day was the third of the tournament. Florida State’s Jackson Lueck and Notre Dame’s Nick Podkul both went deep twice in the Seminoles’ extra-inning win over the Fighting Irish on Wednesday. Fairchild became the first Demon Deacon with more than one home run in an ACC Baseball Championship game since Cory Sullivan versus NC State in 2001.

But aside from Fairchild’s homers, Miami starter Jeb Bargfeldt kept the Deacons off the board during his five-inning stint, and Edgar Michelangeli kept the Hurricanes’ hopes alive with a leadoff homer in the seventh that halved the deficit to 2-1.

Wake Forest Parker Dunshee went seven innings on the mound before giving way to reliever Griffin Roberts. Dunshee allowed only the home run to Michelangeli in the way of scoring – four hits total – while striking out four batters (three in the second inning) and walking three.

But Miami grabbed the lead in the top of the eighth. Ruiz drew a one-out walk and scored all the way from first base on Romy Gonzalez’s double down the left field line.

“Our guys kept battling and battling and beat a really good closer,” head coach Jim Morris said. “He’s had a great year. But our guys played well. Our pitchers threw well. We played good defense. We got a lot of big hits and a lot of really good things as a team. It’s a team effort.”

Gonzalez took third base on the throw and raced home on a Roberts wild pitch to give the Hurricanes a 3-2 lead.

“We were definitely confident in all nine innings of the game, and the guys on the bench, they pick us up,” Gonzalez said. “They always keep our heads up and they pick us up all the time.”

Roberts (1-4) ran into more trouble in top of the ninth. A two-out walk to Carl Chester and a base hit to Michael Burns set the table for Ruiz, who doubled off to the wall in left-center to score both runners for the final 5-2 margin.

“We knew the game was within reach and we just needed to execute,” Ruiz said. “We had a couple chances with runners on, and we just didn’t get that big hit. But you know, eventually, if you put yourself in those situations over and over again, somebody is going to come through.

Gregory Veliz – the second of four Miami pitchers – picked up the win despite walking seven batters in 2.1 innings. Veliz (6-4) struck out four batters and did not allow a hit. The Demon Deacons left 16 runners on base.

“We’re just taking it a day at a time at this point,” Gonzalez said. “The second half has been a completely different year from the first half and we’re just worried about the next game.”