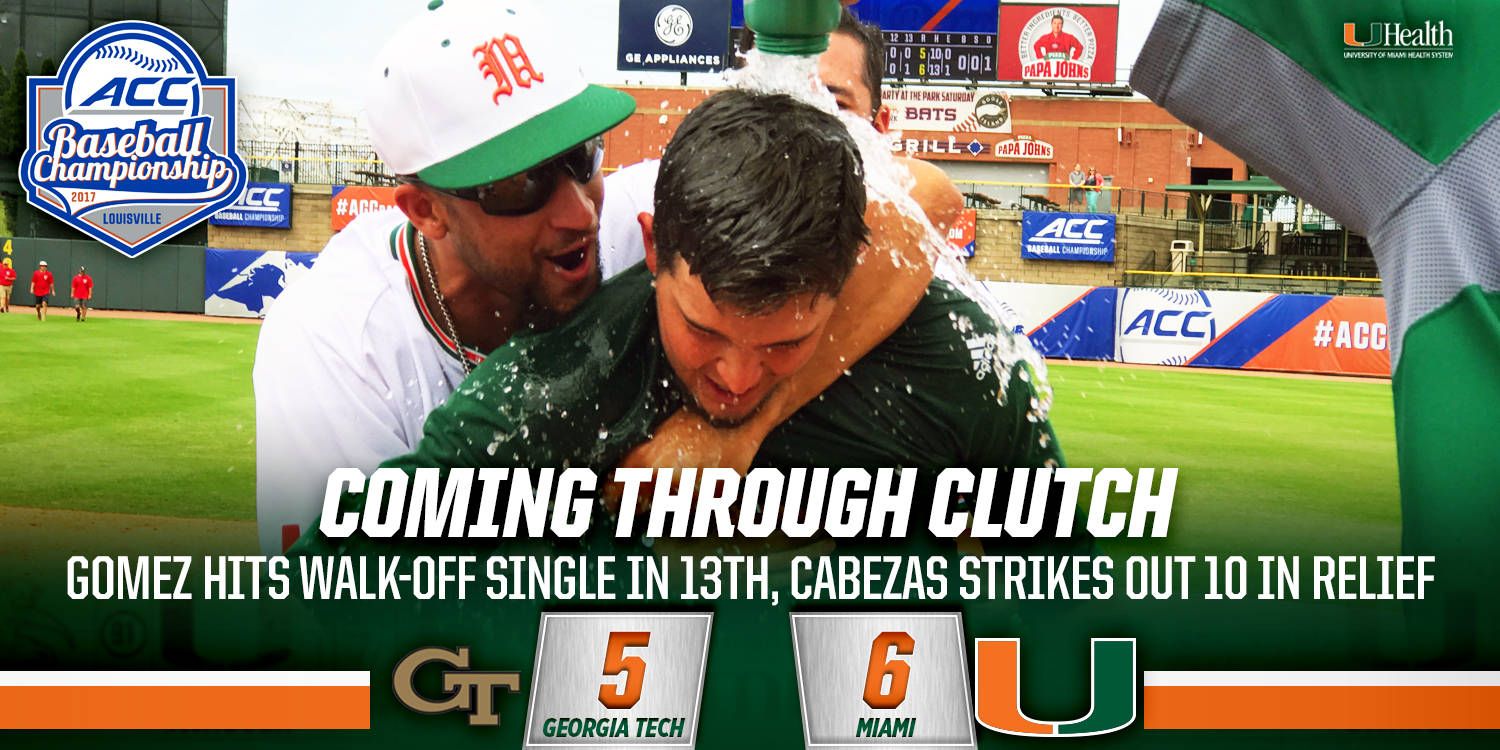 LOUISVILLE, Ky. — Joe Gomez played the role of Hurricane hero Tuesday afternoon, lifting sixth-seeded Miami to a 6-5 win over 10th-seeded Georgia Tech in the bottom of the 13th inning  of the opening game at the ACC Championship.

In a game that took 4 hours and 19 minutes to complete, it was Gomez who successfully ended the marathon contest on the first pitch of an at-bat against Yellow Jackets reliever Zac Ryan.

With senior Edgar Michelangeli on third and senior Christopher Barr on first, Gomez sliced a Ryan (3-5) offering through the right side to send Miami (30-26) to a pivotal late-season win in front of 2,739 fans at Louisville Slugger Field.

“It feels great. I just wanted to do what I can do to get a team win,” Gomez said. “Just anyway, anyhow, I wanted to get it done and I’m happy that I could do it for us.”

Gomez might never have had the chance if not for a sparkling relief outing from sophomore Andrew Cabezas.

The righthander entered in the seventh, walked the first batter he faced on four pitches, and then set down 17 Yellow Jackets in a row, finishing with a career-long 6.1 innings of hitless relief.

Cabezas (5-3) struck out 10 batters, allowed just two walks and threw 90 pitches in a sensational effort to keep the game locked 5-5 through 13 innings and pick up the win.

“Well, needless to say, it was a great win. I don’t remember the last time that at Miami we’ve gone through 13 innings,” head coach Jim Morris said. “So it was a long game. Great effort by both bullpens. Good defense and we’re fortunate enough to get one more hit right there…big hit by Joe.”

Junior Hunter Tackett connected on his first career grand slam and junior Michael Burns also homered in the win for Miami, playing in the first game of a six-day tournament.

The grand slam was the third by a Hurricane this season and first in an ACC Championship game since 2013.

The Hurricanes wrap up play in Pool C against Wake Forest at 3 p.m. Thursday, with the winner advancing to Saturday’s semifinal round. The Demon Deacons play Georgia Tech Wednesday at 7 p.m.

After a solo shot from Burns put Miami on top in the first inning, the Hurricanes quickly fell behind. Georgia Tech struck for a pair of runs in both the second and third to take an early 4-1 lead.

A two-RBI double from Brandt Stallings gave Georgia Tech its first lead at 2-1, and the Yellow Jackets tacked on with a balk called on freshman righthander Evan McKendry that scored a run and an RBI single from Coleman Poje.

Miami responded in the third with the big hit by Tackett to regain a 5-4 lead in front of 2,739 fans.

Junior Carl Chester connected on a one-out single, Burns was hit by a pitch, and senior Johnny Ruiz walked to load the bases.

Tackett came through in a big way, clobbering the fourth pitch he saw from Georgia Tech righthander Jake Lee over the fence in left for his third home run of the season.

“He threw me three sliders in the count and I was kind of hoping he was going to try to sneak a fastball by me and I happened to guess right,” Tackett said. “I knew when I hit it, it had a chance to get out.”

With the single earlier in the inning, Chester extended his hitting streak to a season-long 10 games.

The Yellow Jackets loaded the bases off McKendry in the fifth, but sophomore Frankie Bartow entered in relief and limited the damage to just one run on an RBI single from Chase Murray.

McKendry was tagged for six hits and five runs in 4.0+ innings. He walked four and struck out four across 94 pitches.

Georgia Tech threatened to take the lead in the seventh, but Cabezas entered and exited a bases-loaded jam unharmed to hold the score at 5-5.

Cabezas got Yellow Jackets leadoff hitter Wade Bailey to pop up to first, stranding three of the 12 left on base by Georgia Tech on the afternoon.

Yellow Jackets reliever Jared Datoc tossed 5.0 scoreless innings of relief after entering in place of Lee in the third inning.

Ryan stranded a pair of Hurricane batters in the ninth and tenth innings before the Hurricanes solved him in the 11th.

The Hurricanes return to Louisville Slugger Field Thursday, May 25 for a Pool C game against No. 3-seeded Wake Forest. First pitch for the contest, slated for broadcast on RSN and WQAM, is set for 3 p.m.