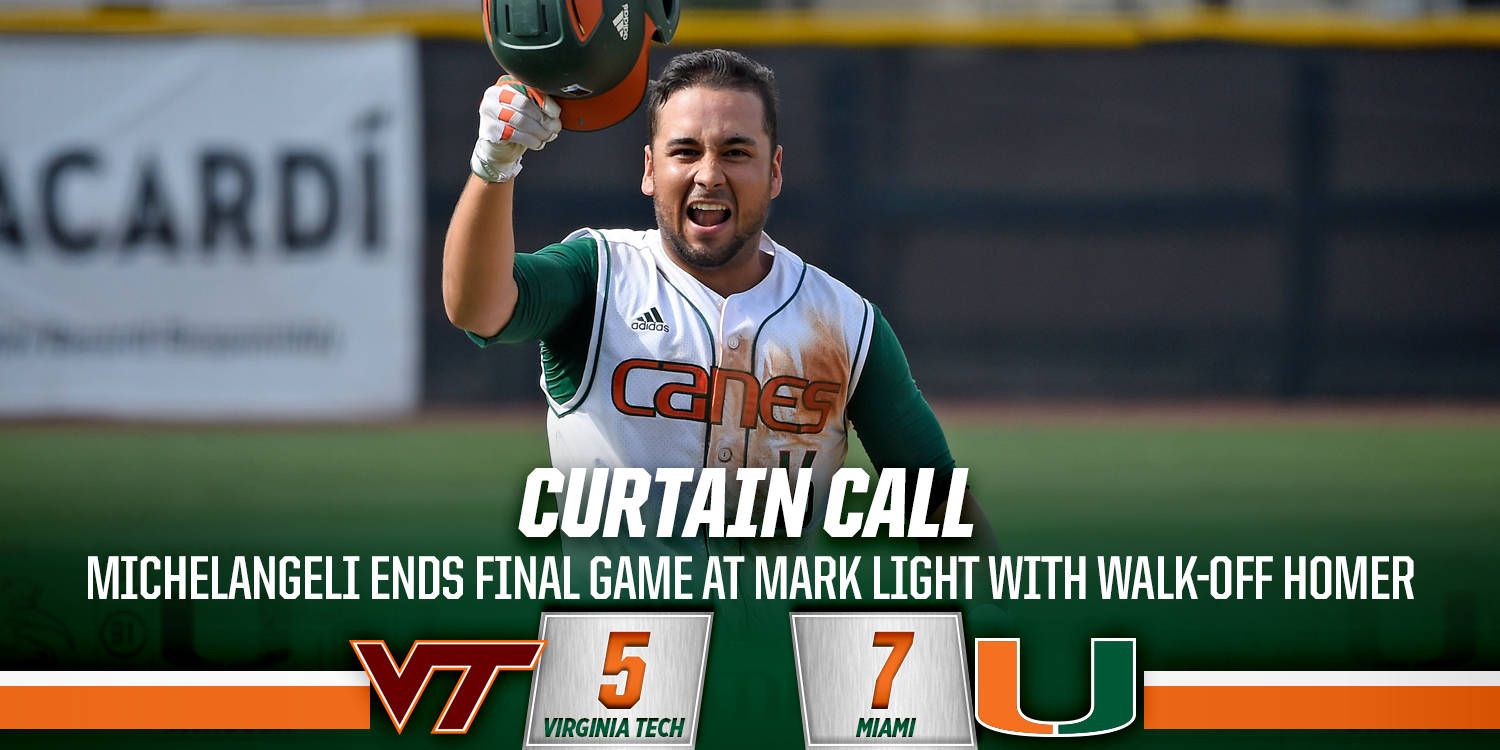 CORAL GABLES, Fla. – The seniors saved their best for last.

Johnny Ruiz hit a two-run home run, Joe Gomez and Christopher Barr combined for three hits, and Edgar Michelangeli capped Miami’s regular season with a walk-off, three-run home run, as the Hurricanes finished off their first weekend sweep of the year with a 7-5 win over Virginia Tech in 10 innings.

Trailing 5-2 in the bottom of the 10th, Miami rallied for two walks and three hits – none bigger than the Michelangeli blast – in a thrilling finish in front of 3,039 fans.

Six of Miami’s nine hits on the afternoon came from the team’s senior class, who were likely playing in the final game of their careers at Mark Light Field.

Virginia Tech (23-32, 9-21 ACC) took its first lead of the game on a three-run home run in the top half of the tenth, as Raheim Cooper put the visitors ahead late against reliever Frankie Bartow.

Freshman Albert Maury (3-1) recorded the final out of the inning after entering in relief of Bartow, who allowed four hits in 0.2 innings.

Miami would not go quietly.

Junior James Davison opened the 10th with a walk and junior Carl Chester doubled to put two runners on with no outs for Ruiz.

The co-captain came up with the first big hit of the inning, a two-RBI single to left on the ninth pitch he saw from Hokies reliever Aaron McGarity (2-6) to trim the lead to 5-4.

Freshman Nico Baldor, who entered as a pinch hitter earlier in the game, drew a two-out walk to extend the game and set the stage.

Michelangeli, who fell behind 0-2 in the count, once again came through with late theatrics, sending Miami to its first four-game winning streak of the season.

The Hurricanes (29-26, 16-13 ACC) who swept a doubleheader Friday to secure their fifth series win in the last seven weekends, will open up the postseason next week at the 2017 ACC Baseball Championship in Louisville, Ky.

Ruiz cranked a two-run, opposite-field home run off Naughton to put Miami ahead 2-0 in the third inning.

Miami righthander Jesse Lepore cruised through his first four innings, tying a season high with seven strikeouts and working with efficiency in the early going.

After allowing a base hit on the first pitch of his day, Lepore allowed just one over the remainder of the outing.

Lepore ran into trouble in the fifth, loading the bases on a hit batter and two walks.

The righthander managed to avoid any further damage when he induced a popout from Tom Stoffel to keep the score tied 2-2.

Miami looked poised to regain the lead in the sixth when sophomore Romy Gonzalez singled and stole second and Michelangeli walked.

Barr connected on a two-out single to center, but Gonzalez was nailed at home on a nice throw from Cooper to end the inning and maintain the 2-2 score.

Pitchers Evan McKendry and Greg Veliz were named Co-Rookies of the Year, junior lefthander Jeb Bargfeldt earned the Ron Fraser Award as the team’s top pitcher, junior Carl Chester won the Arnold Novins Award as the fan favorite, senior Ryan Guerra earned the Bob Werner Award as the player who best exemplifies the qualities of a winner, and Gonzalez was named the Home Run Champion and Hurricane MVP.

The Hurricanes next travel to Louisville, Ky., for the 2017 ACC Baseball Championship, which begins Tuesday, May 23. The ACC Championship bracket will be announced on Sunday, May 21. Follow HurricaneSports.com for more information on Miami’s game times and opponents at Louisville Slugger Field.