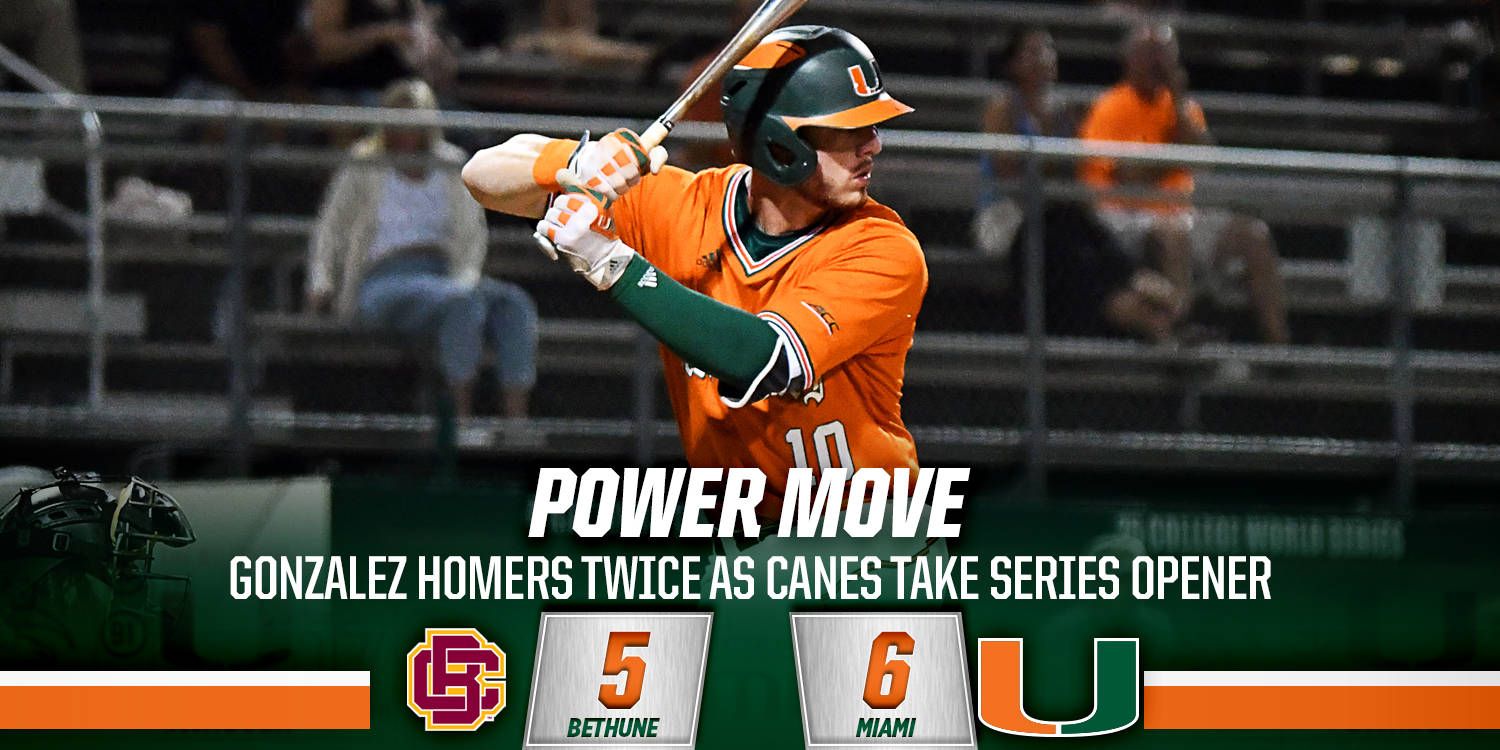 The Hurricanes took early leads of 2-0 and 3-1, but the Wildcats went ahead with a three-run fourth inning to chase Miami lefthander Jeb Bargfeldt early.

Miami (23-22) battled back, taking advantage of two Bethune-Cookman errors in the seventh inning to tie the game 5-5.

Gomez delivered the go-ahead double in the bottom of the eighth, and sophomore closer Frankie Bartow recorded his 11th save in the ninth to seal the win in front of 2,372 fans.

Bargfeldt lasted just 3.2 innings in his shortest outing of the season. The Owasso, Okla., native, who tossed eight shutout innings a week ago in a win over Boston College, was tagged for five hits and four runs.

Bargfeldt walked two and threw 68 pitches before being relieved by freshman Evan McKendry in the fourth.

Gonzalez put Miami ahead in the first inning with a two-run home run to right field off Wildcats starter Anthony Maldonado.

Two innings later, and with his team ahead 2-1, Gonzalez again showed his strength with his second opposite-field homer of the game, bringing his team-leading home run total to 10.

Outside of Gonzalez, Maldonado found success for the Wildcats.

The freshman righthander tossed 6.0+ innings and allowed just the two home runs. He struck out four batters, walked three and threw 101 pitches in the outing.

A solo home run from Bethune-Cookman’s Danny Rodriguez in the second halved Miami’s lead to 2-1.

The Wildcats (26-22) tied the game 3-3 on a two-RBI double from Kyle Corbin off Bargfeldt in the fourth.

An RBI groundout from Chase DeBonis put Bethune-Cookman ahead for the first time at 4-3, and a solo home run from Nate Sterijevski off McKendry in the sixth pushed the lead to 5-3.

McKendry threw 3.1 innings of relief. He struck out three batters and walked two across 56 pitches.

Two errors by Wildcats shortstop Demetrius Sims in the seventh resulted in a tie game.

With senior Joe Gomez on second base, junior James Davison connected on a shaply hit groundball that got past Sims to trim Bethune-Cookman’s lead to 5-4.

Opting to put Gonzalez on base with an intentional walk, reliever Joseph Calamita (2-2) induced a weak groundball from junior Hunter Tackett that Sims charged and threw past Rodriguez at first, scoring Davison to tie the game 5-5.

Sophomore Andrew Cabezas (4-2) tossed a scoreless eighth inning to pick up his fourth win in his last five outings.

With redshirt senior Christopher Barr on second base, Gomez cranked a double to right-center off Wildcats reliever Ivan Coutinho to put the Hurricanes ahead at 6-5.

Bartow allowed a walk and a single with runners on the corners, but induced an inning-ending flyout to right by Jameel Edney to seal the win.

The two teams return to Mark Light Field Saturday for Game 2 of the series. First pitch for the contest, slated for broadcast on ACC Network Extra, 560 WQAM and WVUM 90.5 FM, is set for 7 p.m.