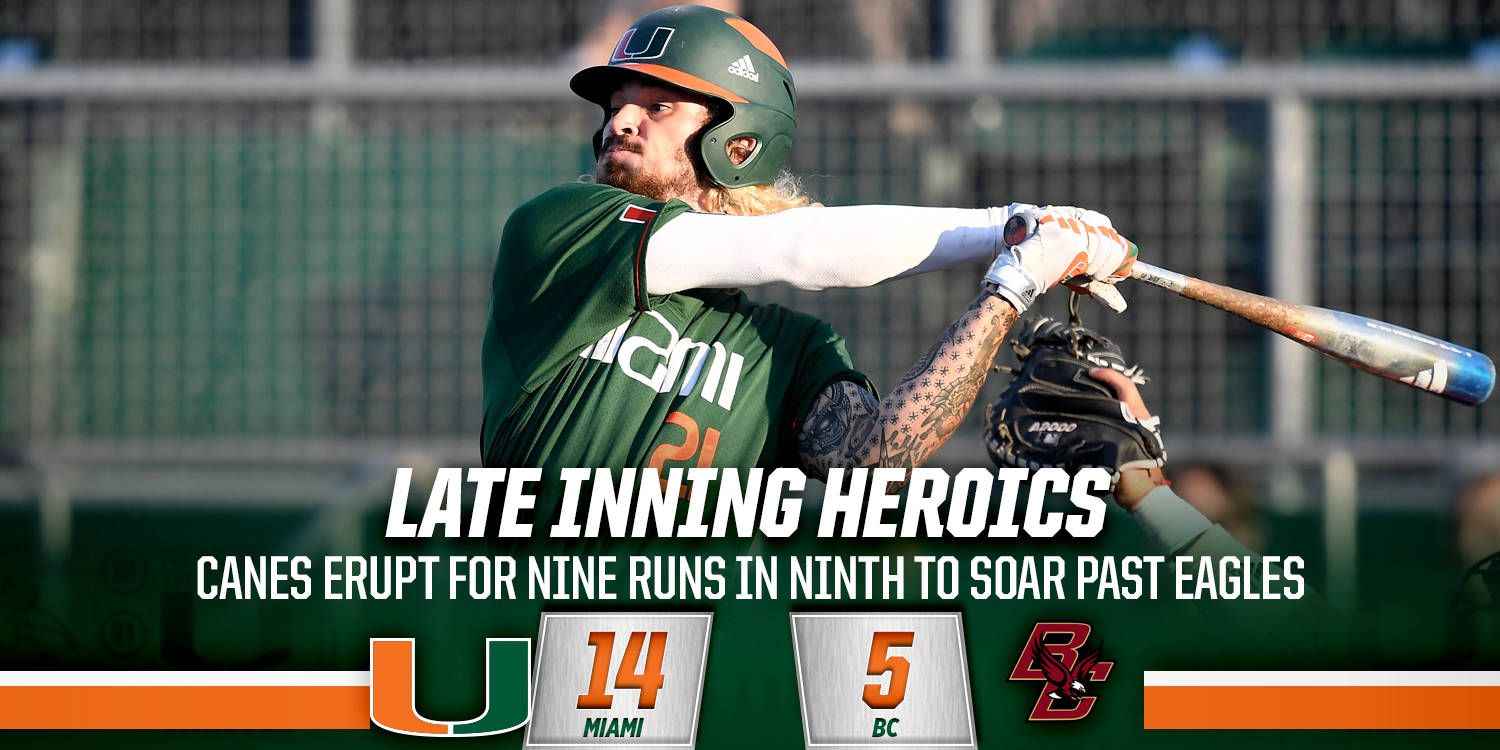 CHESTNUT HILL, Mass. – A nine-run ninth inning barrage that featured three home runs and six hits was far from the brightest moment for Miami in a series-clinching 14-5 win over Boston College Saturday.

That belonged to sidewinder Cooper Hammond, who made his first appearance on the hill in a Miami uniform since undergoing Tommy John surgery last spring.

The Venice, Fla., native tossed a scoreless bottom of the ninth in his first action since March 8 of last year.

And though the game’s outcome had been decided in the previous half-inning, Hammond’s return was no less special for a surging Hurricanes team who has not lost a series since April 2. He enjoyed emotional embraces with coaches, teammates and both parents before the team departed Shea Field.

“He has worked so hard for over a year to get back,” head coach Jim Morris said. “To see him back out there on the mound was great.”

Thanks in large part to a season-high 18 hits, the Hurricanes (22-21, 12-10 ACC) overcame a sluggish start from junior lefthander Michael Mediavilla to climb above .500 for the first time since the opening weekend of the season.

Miami connected for three home runs in the game’s final inning to complete the comeback. Sophomore Romy Gonzalez, junior Michael Burns and senior Randy Batista all homered in a ninth where Miami sent 12 batters to the plate.

Gonzalez’ home run, his team-leading eighth blast of the year, gave Miami its first lead at 7-5. The Hurricanes were far from done, as Batista’s three-run blast later in the inning was followed by a solo shot from Burns.

Every Miami starter recorded at least one hit.

Junior Hunter Tackett, who went 2-for-4 in Friday’s 3-0 win, homered for the second straight day, reached base in all five plate appearances and had a career-best four hits, including a solo homer. He added three runs and had three RBI in the victory.

It was Tackett who delivered the key hit in a two-out, eighth-inning rally, driving a pitch off Casey into left-center for a game-tying, two-run double that knotted the game, 5-5.

“We could have scored more runs earlier, but we didn’t,” Morris said. “We got the big hits late. Hunter’s was the biggest one to tie it in the eighth, and the ninth was great.”

The hit was the fourth of the day and sixth of the series for Tackett, who has raised his average to .255 after entering the weekend under .200.

The big southpaw struck out two batters across 65 pitches before being relieved by freshman righthander Evan McKendry in the fourth.

Trailing 1-0 in the second, Miami strung together three straight two-out hits by the bottom of the order to tie the game.

Tackett singled through the left side, redshirt senior Edgar Michelangli bunted for a hit, and redshirt senior Christopher Barr sliced a pitch from BC starter Dan Metzdorf into left-center for an RBI single.

But Boston College tagged Mediavilla for three runs in the home half of the inning to take a 4-1 lead.

An RBI single by Brian Dempsey put BC back on top 2-1, a sacrifice fly from Casey made it 3-1, and an RBI single from Jake Palomaki off Mediavilla scored Dempsey for the third and final run of the inning.

The Hurricanes responded with a run in the third on an RBI double from Burns that scored senior Randy Batista, who reached on an error to open the inning, to cut the deficit to 4-2.

Another big blast from Tackett, this one in the sixth, trimmed BC’s lead to 4-3.

“There’s no question about that,” Morris said when asked about the importance of playing well in the second half of the season. “It’s something that the NCAA committee looks at, is how you finish up. That’s big.”

The two teams return to Pellagrini Diamond Sunday for Game 3 of the weekend series. First pitch for the finale, slated for broadcast on WVUM 90.5 FM, is set for 1 p.m.