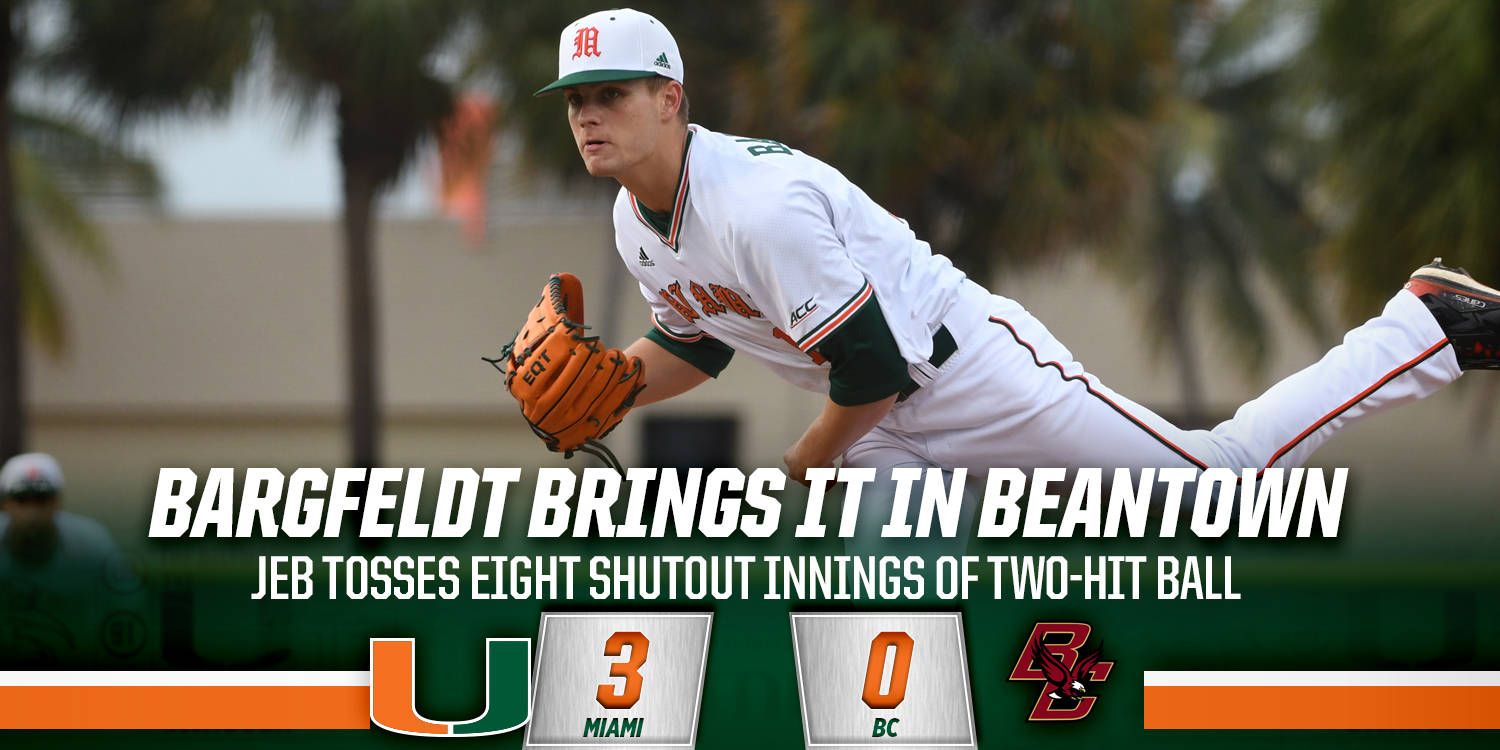 Bargfeldt Shines in Miami's 3-0 Shutout of BC

Sophomore closer Frankie Bartow recorded his 10th save of the season with a scoreless ninth to seal the win.

“He was outstanding. He had total control of the game the whole way,” head coach Jim Morris said. “I felt like I could have sent him out there in the ninth, but my philosophy has always been not to do that when you’ve got a good bullpen.”

The Owasso, Okla., native faced the minimum through five innings, and had only one batter reach as far as second base on the day. He retired nine straight batters from the second through fifth, throwing a career-high 109 pitches in the outing.

The visitors out-hit the Eagles 8-3, and six of nine starters recording at least one hit.

Tackett opened the scoring and also delivered the knockout blow. His solo home run in the fourth broke a 0-0 tie, and his two-out RBI single in the eighth provided some late insurance.

Sophomore Romy Gonzalez finished 2-for-3 to extend his hitting streak to a career-long seven games, while Tackett finished 2-for-4 for his second multi-hit game.

In a rematch of the 2016 NCAA Coral Gables Super Regional, the Hurricanes (21-21, 11-10 ACC) found success against BC righthander Jacob Stevens in the early going, but stranded a pair of runners in both the first and third.

Tackett put Miami ahead, 1-0, in the fourth inning with a solo shot. The junior designated hitter crushed the first pitch he saw from Stevens over the fence in left for a no-doubt blast.

Junior Carl Chester converted on the scoring opportunity, driving a pitch from Stevens through the left side for an RBI single that scored Burns from second.

Stevens scattered seven hits and two runs across 6.1 innings. He struck out six, walked four and threw 110 pitches in the outing.

Miami used some small ball to add an insurance run in the eighth. Junior James Davison, who entered as a pinch runner after freshman Nico Baldor drew a one-out walk, stole second and took third on a groundout by Barr.

Making his first start since April 10, Tackett came through once again late, driving a pitch from Boston College reliever John Witkowski through the left side to push Miami’s lead to 3-0.

“That’s what gets you in the lineup,” Morris said. “Hunter worked hard, never complained, smiled and was ready to go. That’s a big thing. He’ll be in there tomorrow. I’m looking forward to watching him swing the bat some.”

The two teams return to Pellagrini Diamond Saturday for Game 2 of the weekend series. First pitch for the contest, slated for broadcast on WVUM 90.5 FM, is set for 1:30 p.m.