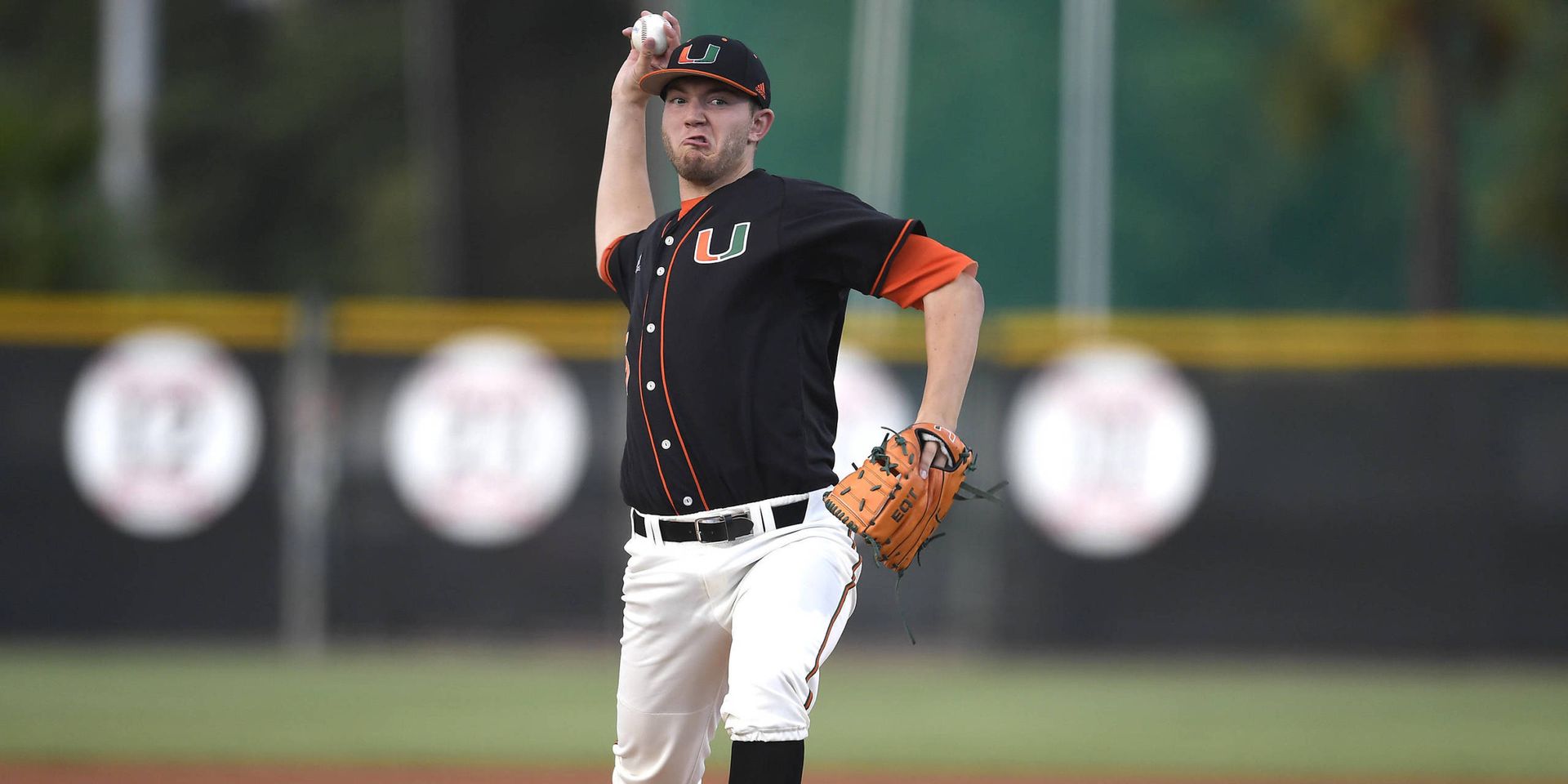 CORAL GABLES, Fla. – FIU plated two runs in the top of the ninth to take a late lead and held on Wednesday night, capturing a 5-4 victory over host Miami at Alex Rodriguez Park at Mark Light Field.

With Miami leading 4-3 and the Panthers down to their last two outs, FIU strung together back-to-back singles, an RBI groundout and the go-ahead RBI single from JC Escarra off Miami closer Frankie Bartow (1-3).

“It was a disappointing loss,” head coach Jim Morris said. “We were ahead there at the end and we normally win when we’re ahead at the end. FIU battled hard, and they did a good job at that.”

An errant throw on the groundout by senior Randy Batista, who was trying to complete a game-ending double play in the ninth, got past a covering Bartow and allowed the tying run to cross the plate.

The blown save was the first of the season for Bartow, who was a perfect 9-for-9 in save opportunities entering the game, including one Tuesday night at FIU Baseball Stadium.

“He didn’t locate. He didn’t have the sink to his fastball tonight. That happened to closers, and it’s magnified in that situation,” Morris said.

Panthers reliever Michael Agis pitched the final 4.1 innings of the game to earn the win.  Agis (1-2) struck out six batters and allowed just three hits across his 54-pitch relief outing.

“We just didn’t make plays,” sophomore Romy Gonzalez said. “It’s definitely a tough loss. We have to turn the page and get ready for Boston College this weekend.”

He struck out four batters and walked four before being relieved in the sixth inning after 81 pitches.

“Definitely still not what I think I’m capable of doing,” Lepore said about his start. “I’m just taking it step by step, and using this as a steppingstone to build off of and work hard until the end of the season.”A

For the second straight night, Miami jumped out to an early lead. The Hurricanes plated two runs in the opening inning, going ahead 2-0 on an RBI triple from James Davison that scored Batista and an RBI groundout from junior Carl Chester that scored Davison.

With a leadoff walk to open the bottom of the first, Batista successfully reached base for the 20th straight game.

Trailing 2-1 in the fifth, the Panthers looked poised to take the lead when they loaded the bases with no outs on a single and two Miami errors on sacrifice bunt attempts. But Lepore buckled down and limited the damage to just a sacrifice fly, inducing a double play from Escarra to end the inning with the score tied 2-2.

Miami regained the lead in the home half of the fifth. A Batista single and an error by FIU’s Christian Coipel on a flyball from Chester put two UM runners on base and set up the scoring opportunity.

Sophomore Romy Gonzalez delivered, knocking a Mourelle pitch into left field for an RBI single to put Miami back on top, 3-2. The single extended Gonzalez’ hitting streak to a season long-tying six games.

Mourelle issued a bases-loaded walk to redshirt senior Christopher Bar, pushing Miami’s lead to 4-2 and prompting an FIU pitching change with two outs in the fifth.

The Panthers cut the deficit to 4-3 on an RBI double from Javier Valdes in the sixth.

Sophomore Andrew Cabezas delivered another dominant relief after entering in the seventh. He struck out four batters and allowed just one walk, needing 25 pitches to get through two scoreless innings.

The Hurricanes next travel to Chestnut Hill, Mass., for an ACC series with host Boston College from April 28-30. First pitch for the series opener, slated for broadcast on WVUM 90.5 FM, is set for 2:30 p.m. Friday.