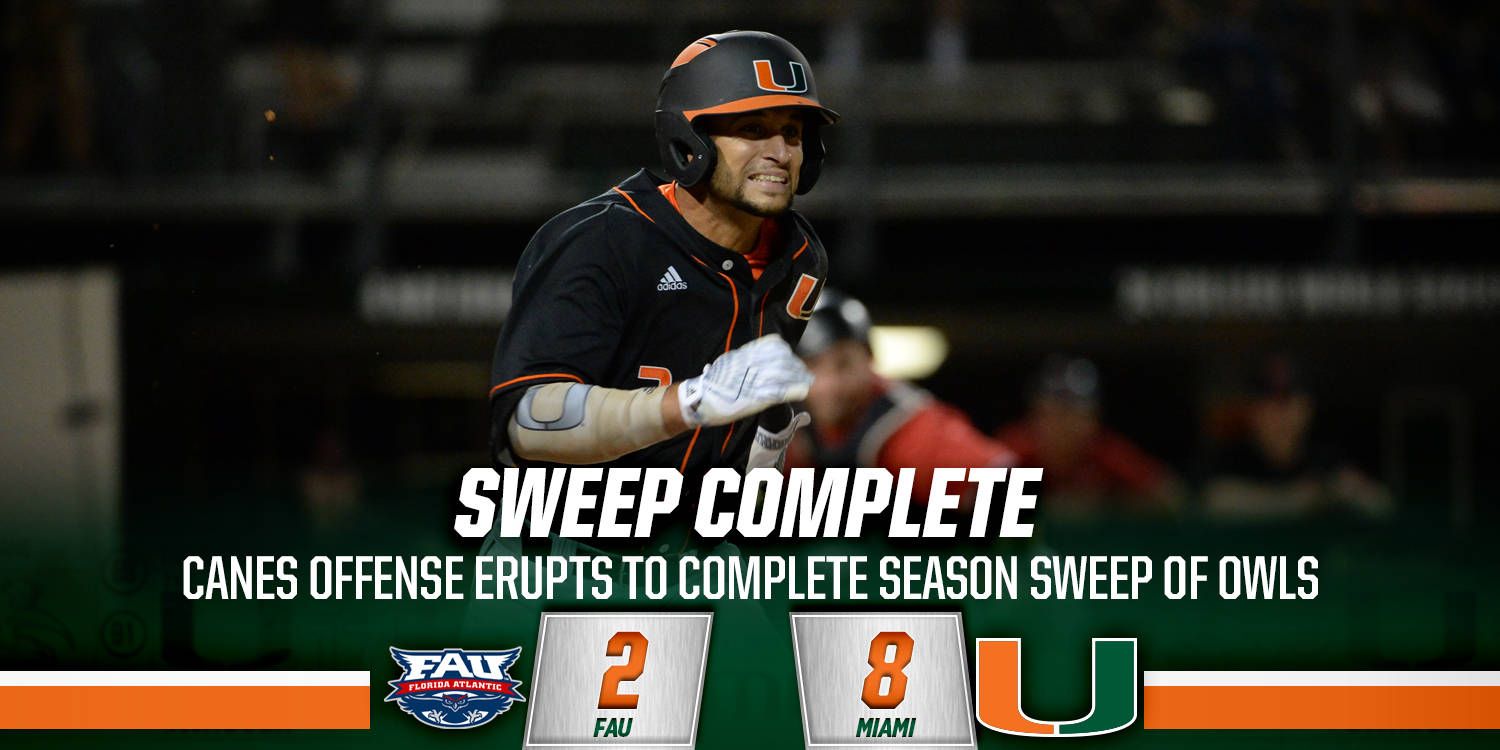 CORAL GABLES, Fla. – Making his first start on the mound in more than a month, freshman Evan McKendry delivered six strong innings to lead Miami to an 8-2 win over FAU Wednesday night at Mark Light Field.

McKendry, who was spotted a sizable early lead, tied a career high with six strikeouts. The Pembroke Pines, Fla., native scattered four hits and one walk across 78 pitches, helping lead Miami to a season sweep of the Owls.

The righthander, who has made his last five appearances out of the bullpen, has a 2-0 record with a 2.00 ERA in three starts this season.

“It was great [to start], but it was more of a great team win,” McKendry said. “It’s what we need going into a big weekend. It was nice to get a big win and roll into the weekend with some momentum.”

Miami (18-19) scored runs in each of the game’s first three innings, including five in the third, to jump out to a commanding early advantage. The Hurricanes plated a run in the first, two more in the second, and batted around in a third inning where they connected for four hits, two walks and one hit batter.

“I thought it was a really good win for us,” head coach Jim Morris said. “We’re battling every game, and I think our guys are playing hard every game. FAU is having a good year.”

The hosts loaded the bases in the first off FAU starter Sean Labsan but were only able to scrape across one run on a sacrifice fly from redshirt senior Edgar Michelangeli.

The Owls (24-11-1) would immediately respond, knotting the game 1-1 on a solo home run from Stephen Kerr off McKendry in the next half-inning.

Miami was more successful in the second, stringing together a two-out rally to regain a lead.

After Labsan (1-2) quickly retired the first two batters of the inning, senior Joe Gomez reached on a walk, senior Randy Batista reached on an error, and junior James Davison singled to score a run.

A wild pitch from Labsan plated Miami’s third run of the game.

The Hurricanes chased Labsan and blew the game open with five runs in the third. The first three Miami batters of the inning reached on a double, single and walk before FAU righthander Nick Prather entered in relief.

“We knew we had to put runs up against FAU,” Batista said. “We had the opportunity to put them away right there, and that’s what we did. We put some hits together, some big hits with two outs, and just tried to stack them on when we can.”

Miami would not be deterred by the pitching change, as a sacrifice fly from junior Michael Burns, a two-RBI from Batista and a two-RBI single from junior Carl Chester – all off Prather – made it 8-1 in favor of the hosts.

“We put good at bats together throughout the game and got big hits when it mattered,” Batista said.

The early offensive support was more than enough for McKendry (3-1), who was sharp from the outset in his third start as a Hurricane.

After the home run from Kerr in the second, McKendry retired 12 of the next 13 batters he faced before a leadoff single from FAU’s Tyler Frank in the sixth.

“Pitching with any sort of lead is great, but an 8-1 lead makes everything easier,” McKendry said.

The Owls tagged McKendry for a run in his final inning on a sacrifice fly from Esteban Puerta, but the freshman buckled down to retire the next two batters on flyouts to end his outing in front of 2,335 fans.

“It was great to see McKendry come up and pitch the way he did,” Morris said. “We played really solid defense and a lot of guys got hits.”

With a leadoff single in the first, Batista successfully reached base for the 16th straight game. His three runs were a career high, and his multi-hit performance (2-for-5) was his third of the year.

The Hurricanes return to Mark Light Field on Fri., April 21 to open a rivalry series with visiting Florida State. First pitch for the opener, slated for broadcast on ACC Network Extra, 560 WQAM and WVUM 90.5 FM, is set for 7 p.m.

“It’s a big series. We have to come ready to play…it’s pretty much why all of us come to Miami,” McKendry said. “It’s one of the biggest series we could possibly play here, and it’s going to be a lot of fun…big weekend.”