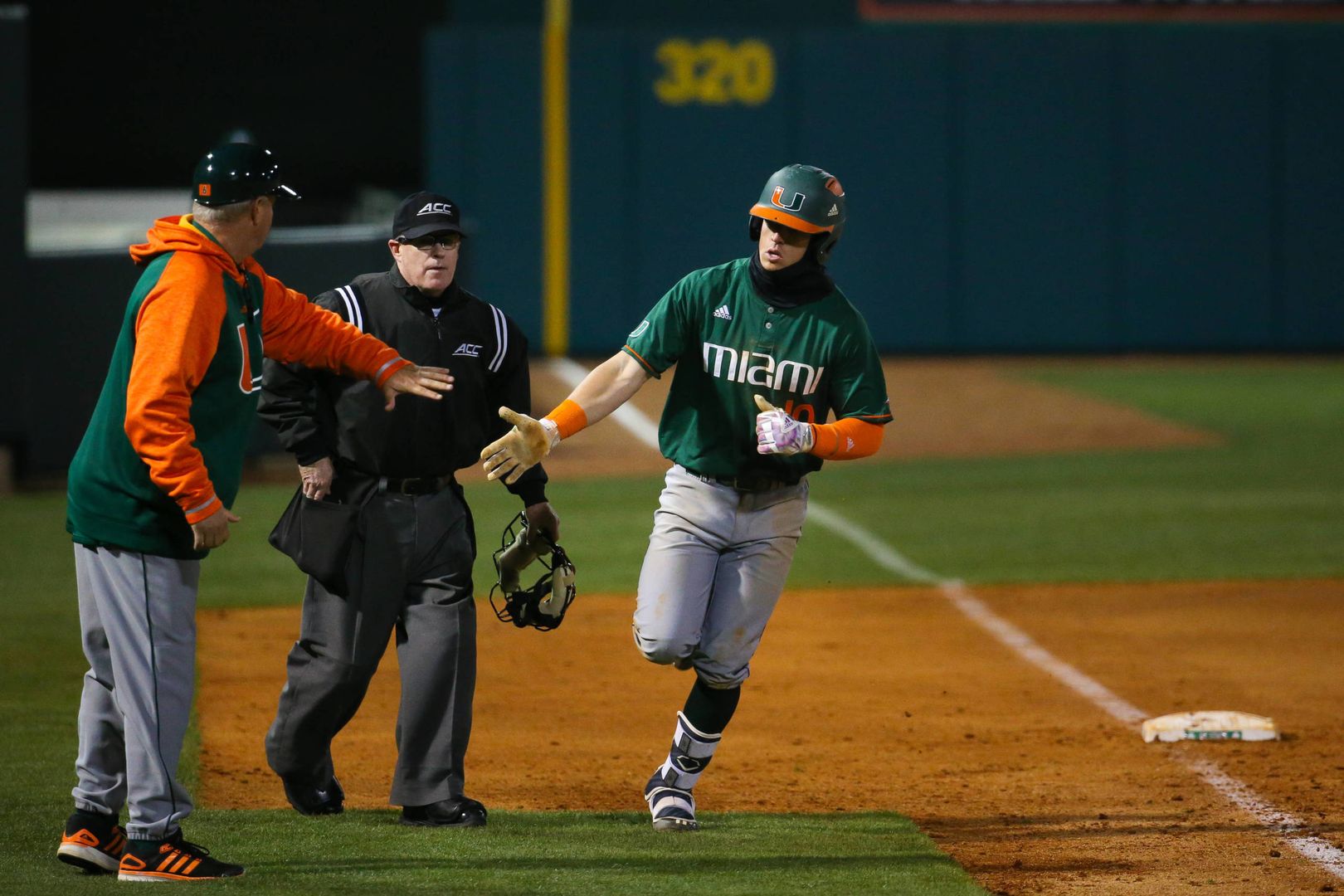 RALEIGH, N.C. – Miami mounted a late game-tying rally but host NC State regained an eighth-inning lead, as the Wolfpack held on for a 5-3 win in the first game of an ACC series at Doak Field.

Trailing 3-1 and down to their final six outs, the Hurricanes got two solo home runs in the eighth to tie the game.

Senior Johnny Ruiz belted the first pitch he saw from Wolfpack reliever Austin Staley over the fence in right for a home run to cut the deficit to one, and two batters later, sophomore Romy Gonzalez crushed a full-count offering to dead-center for a game-tying blast.

The home run was the team-leading fifth of the year for Gonzalez.

But NC State struck for two runs in the home half on a bases-loaded double from Shane Shepherd off Miami reliever Andrew Cabezas (0-2).

Freshman Greg Veliz connected for a one-out single in the ninth to put the tying run at the plate, but Staley (1-0) induced a game-ending double play to help the hosts take the first of a three-game set.

The Wolfpack (11-8, 2-2 ACC) struck first Friday night, taking a 1-0 lead in the first inning aided by two Miami miscues in the frame. NC State junior Evan Mendoza opened with a leadoff single, took two bases on a wild pitch and groundout, and scored on the second wild pitch of the inning from Lepore.

Miami (8-10, 2-2 ACC) wasted little time in responding, however, knotting the game at one in the next half-inning.

Redshirt senior Christopher Barr and junior James Davison both reached on NC State errors to open the inning, and after a sacrifice bunt from senior Johnny Ruiz, a sacrifice fly from junior Carl Chester plated Barr, who made a nice slide to tie the game, 1-1.

Chester, who drew a two-out walk in the first inning, successfully reached base for the 14th straight game.

The Hurricanes had a chance to add to their lead in the fifth when they loaded the bases and chased NC State starter Sean Adler after just 4.2 innings.

Ruiz extended his streak to 12 straight games reaching base with a walk, one of three in the inning issued by Adler. But Wolfpack reliever Joe O’Donnell entered and struck out sophomore Romy Gonzalez to keep the game tied in front of 2,463 fans.

NC State regained the lead in the sixth with a pair of RBI singles by Joe Dunand and Brad Debo.

Lepore was relieved with two outs in the sixth. The junior righthander was tagged for three runs on seven hits and one walk with six strikeouts in his 88 pitches.

The two teams return to Doak Field Saturday for Game Two of the weekend series. First pitch for the contest, slated for broadcast on ACC Network Extra and WVUM 90.5 FM, is set for 6:30 p.m.