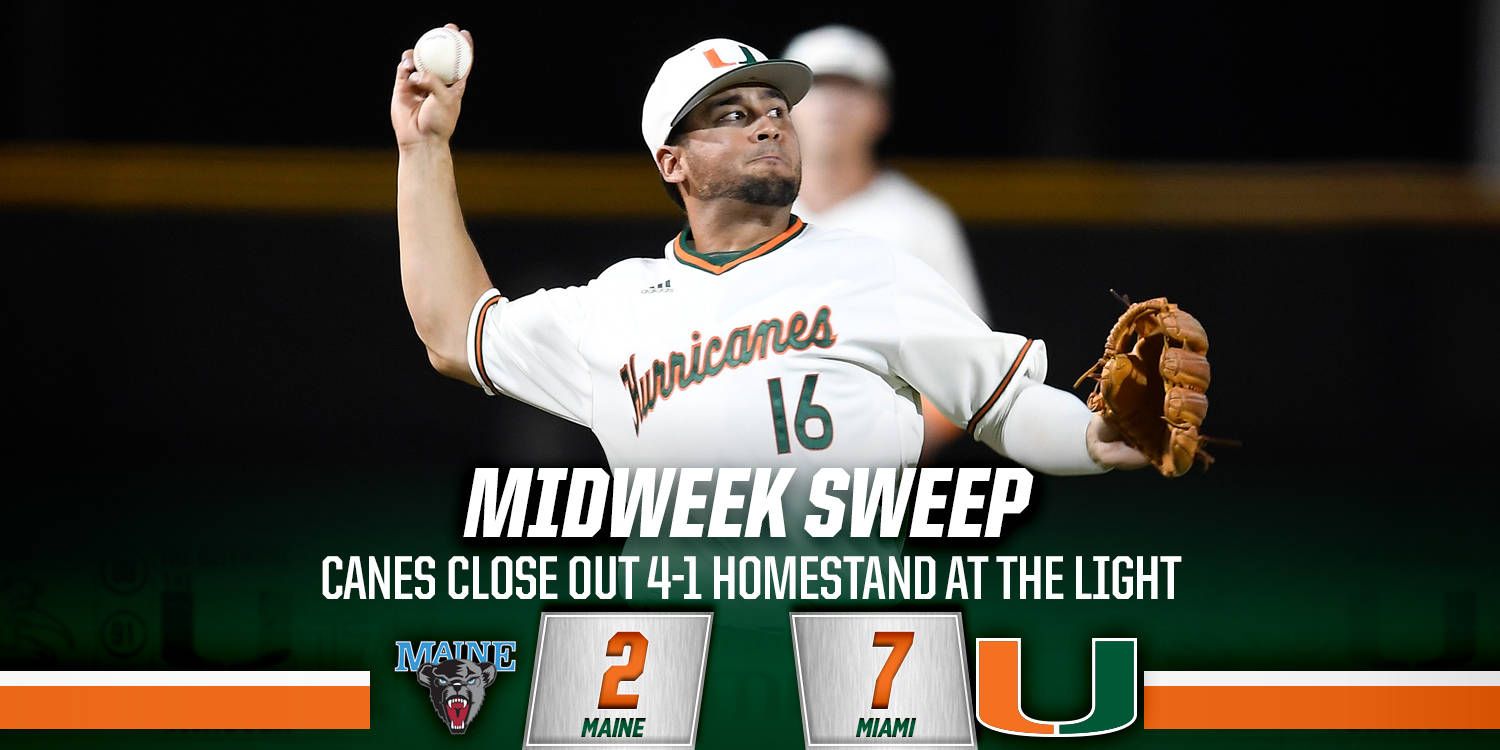 Miami Finishes Off Sweep of Maine With 7-2 Win

CORAL GABLES, Fla. – Freshman Greg Veliz picked up the first win of his career Wednesday night at Mark Light Field, as host Miami finished off a midweek sweep of Maine with a 7-2 victory.

Veliz (1-1) struck out six batters across five shutout innings, leading the Hurricanes (8-9) to their third straight win and fourth in the past five games.

The Hurricanes, who topped the Black Bears, 4-3, in a fast-paced Game 1, were the benefactors of 13 walks issued by the visitors in a slower-paced Game 2.

Veliz said a conversation with fellow freshman Evan McKendry, who tossed seven strong innings in the win Tuesday, helped in his preparation.

“It was a little weird at first yesterday, getting to watch Evan, see their tendencies,” Veliz said. “I asked him a couple things, I picked his brain, and I went after them with a pretty good game plan. It prepared me well.”

Veliz did not allow a hit until a two-out infield single in the fifth, but said he wasn’t focused on any no-hit bid, but rather just keeping Maine scoreless.

“Not at all. I just try to get out there and get outs. I try to get off the field as quick as possible so my team can hit,” Veliz said.

Veliz struggled with command in the first inning, needing 30 pitches to get through the opening frame after two walks and a hit batter. But the Key West, Fla., native retired Brandon Vicens on a flyout to center to keep the Black Bears off the scoreboard.

The Hurricanes scored a pair of runs in the second without recording a hit, and the big righthander’s night ended early when Burns connected an RBI single to make it 3-0 with no outs in the third.

Murphy (0-2) walked seven batters across 66 pitches. Bases-loaded free passes to redshirt senior Christopher Barr and junior James Davison opened the scoring in favor of the hosts in the second inning.

Veliz recorded back-to-back strikeouts to open his final inning, but ran into trouble when Jonathan Bennett walked and an error by MIchelangeli put two Black Bears (6-10) in scoring position. But the talented righthander buckled down and avoided any damage when he got Tyler Schwanz on a groundout to third. He departed after 99 pitches, and struck out at least five batters for the third straight start.

Miami tacked on a pair of runs off Maine reliever Zach Winn in the fifth. A walk from Batista was followed by singles from senior Barry Buchowski and Barr. The speedy Davison beat out a potential double play ball to drive in a run, and a passed ball charged to Maine catcher Christopher Bec plated Buchowski from third.

The Black Bears scraped together single runs in the seventh and eighth innings off Miami reliever Keven Pimentel, but sophomore Frankie Bartow entered in relief and stranded two runners to maintain a 5-2 lead.

Sophomore Romy Gonzalez helped Miami add insurance when he connected on a leadoff double in the eighth to extend his hitting streak to five games. Gonzalez scored on an RBI single from Michelangeli, and the third basehit in the inning – a single through the left side from Batista – made it a five-run lead at 7-2.

Bartow earned his fourth save of the season, allowing two hits in the final 1.1 innings. He struck out Schwanz swinging to end the game in front of 2,431 fans.

The Hurricanes next travel to Doak Field for a weekend ACC series against host NC State from March 17-19. First pitch for the series opener, slated for broadcast on ACC Network Extra and WVUM 90.5 FM, is set for 6:30 p.m.