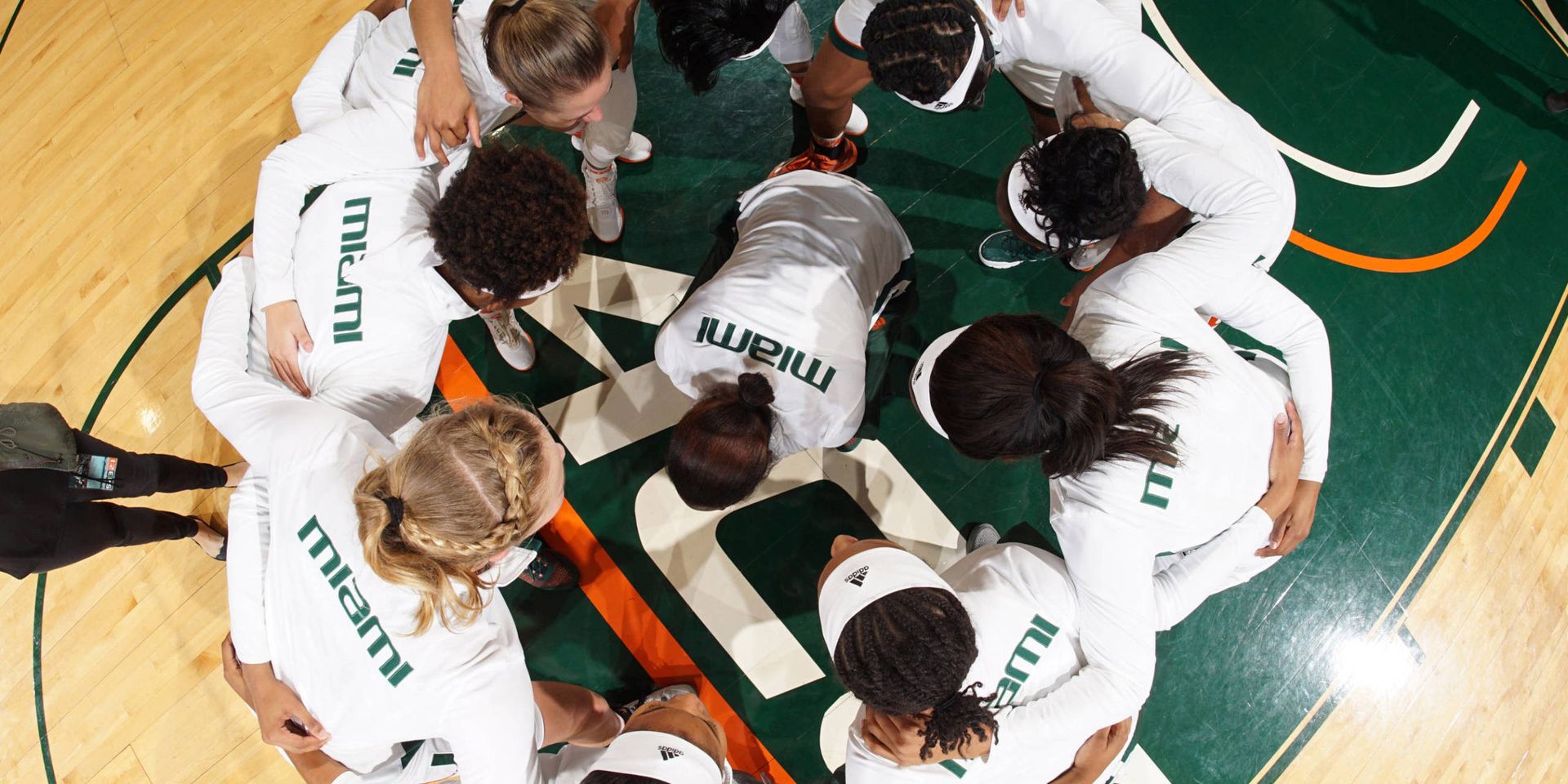 DURHAM, N.C. – The University of Miami women’s basketball team dropped an 83-70 decision Sunday afternoon on the road at No. 13/14 Duke.

Senior guard Adrienne Motley registered a season-high 23 points for No. 16/17 Miami (19-7, 8-6 ACC) in a game that the Hurricanes trailed by just one at Cameron Indoor Stadium.

“We just can’t let things get away from us. We spent the first five minutes of the second half a little over-concerned about unimportant things,” Miami head coach Katie Meier said. “It’s basically unforgivable with a veteran team. We know what life is like on the road.”

The Hurricanes opened the second frame with back-to-back 3-pointers to take their first lead of the game. Miami then continued its run, stretching it to 14-0, to take a 24-18 lead, holding the Blue Devils without a point for a span of six minutes and 13 seconds.

A 5-0 run by the Blue Devils over the last 53 seconds of the half gave them a one-point edge, 32-31, at the break. Motley paced all scorers with 11 points before halftime, while Miami committed just four turnovers in the first half compared to Duke’s 12.

“I thought that was an incredible defensive effort in the first half,” Meier said. “I thought my team really locked in. The people we wanted shooting were shooting. We made a couple mistakes and they got us.”

Duke used a 14-2 surge during the third frame to take a 57-48 advantage heading into the final session of play.

The Hurricanes pulled to within seven during the fourth period, but were unable to get any closer, as the Blue Devils earned the 13-point victory.

“In the second half, because our offense was disjointed, we went away from the discipline. And not discipline like an individual on one player, but the discipline on the team defense we were playing in the first half,” Meier said. “We turned them over; we did everything we wanted to do. If we don’t score that has got to be okay. It just didn’t seem okay in the second half.”

In addition to Motley, sophomore guard Laura Cornelius also recorded double-digit points for the Hurricanes, finishing with 10 to go along with a game-high five assists.

Lexie Brown led all scorers with 28 points, shooting 8-of-10 from the floor, 4-of-4 from 3-point range and 8-of-8 at the line for the Blue Devils. Fellow redshirt junior guard Rebecca Greenwell notched double-double with 22 points and 13 rebounds. Senior forward/center Kendall Cooper had 12 points and freshman forward Leaonna Odom chipped in 11.

Miami had a 26-12 edge in bench points, marking the 22nd time in 26 games the Hurricanes’ bench has outscored scored that of their opponent, including the 15th time by double digits.

Duke moved its home winning streak to 16 in a row, good for the seventh-longest active streak in the country.

The Hurricanes’ next contest will be their final road game of the regular season, a 7 p.m., matchup with Virginia Tech Thursday night in Blacksburg, Va.

·         This is the second straight season Miami has had a streak of over six minutes against Duke during which it held the Blue Devils scoreless. Last year’s mark was 11 minutes and 37 seconds.

·         Motley’s 23 points marked the 24th time in her career she has tallied 20-plus in a game, including the third time this season. It is the 12th time she has done so in an ACC contest, including the first time in 2016-17 and the second straight year against Duke.