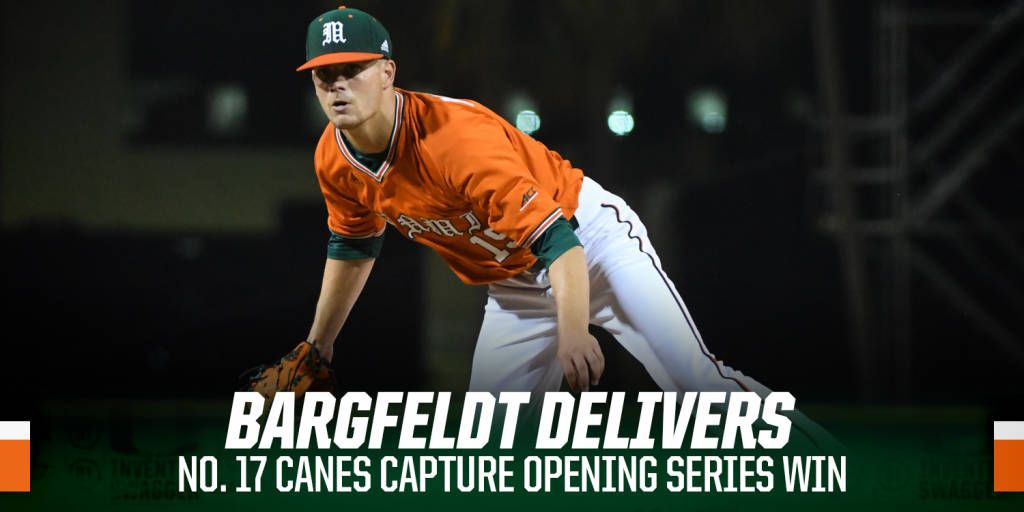 CORAL GABLES, Fla. – No. 17 Miami picked up its first series win of the season Saturday night, earning an 8-4 victory against visiting Rutgers at Alex Rodriguez Park at Mark Light Field.

The formula for Game 2 was much like that of Game 1: pitching, defense and timely hitting.

Miami (2-0) received another strong effort from a pitcher making his weekend debut. Junior lefthander Jeb Bargfeldt, a newcomer from Cisco College, followed up a dominant showing from Friday night starter Jesse Lepore with 5.2 solid innings of his own to help capture the series.

Trailing 2-0 in the third inning, the Hurricanes struck for three runs to go ahead for good. The Hurricanes offense added five runs over their final three innings to seal the win.

Miami goes for the sweep of Rutgers Sunday at 1 p.m., looking to extend a 16-game winning streak that dates to 2011.

He departed to a standing ovation from the 3,109 fans in attendance with two outs in the sixth. Included in that group was his father John, head softball coach at Tulsa whose team played at FAU earlier in the day, and mother Barbara.

It was Rutgers who struck first Saturday night on a solo home run to left-center off the bat of sophomore Jawuan Harris in the third inning.

The Scarlet Knights (0-2) added a second run on a basehit from Christian Campbell that scored Mike Carter, who singled and took third on a throwing error from catcher Joe Gomez earlier in the inning.

The Hurricanes showed some resiliency in the home half of the frame, striking for three runs to take a lead they would not relinquish.

Junior Hunter Tackett opened the action with the first hit of his career on a single up the middle. An RBI single from junior Brandon Gali scored Tackett to halve the Rutgers’ lead, and an RBI single from Burns two batters later scored Gali to tie it 2-2.

With two runners on base, senior Johnny Ruiz put Miami ahead with an RBI groundout to the right side of the infield that scored speedy junior Carl Chester from third.

The Hurricanes added on late, including a two-out rally in the sixth that resulted in their fourth run off starter Serafino Brito (0-1).

A single from redshirt senior Edgar Michelangeli was followed by a double dropped in by sophomore Romy Gonzalez. A tough play for Rutgers outfielder Tom Marcinczyk in right resulted in Michelangeli racing home all the way from first.

Freshman Albert Maury, Jr., who relieved Bargfeldt with two outs in the sixth, tossed 2.1 scoreless innings of relief in his debut.

Another RBI double from Gonzalez and an RBI groundout from Christopher Barr capped Miami’s scoring in the eighth.

The Hurricanes got to the Rutgers bullpen in the seventh on a two-RBI double to right by Burns off reliever Dante Scafidi that pushed the lead to 6-2.

Maury ran into trouble after allowing two singles in the eighth, but got a double play and a groundout to avoid any runs.

Harris connected on his second home run of the game – a two-run shot off freshman Mason Studstill – in the ninth.

Miami returns to Mark Light Field Sunday for Game 3 of its series with Rutgers. First pitch for the contest, slated for broadcast on ACC Network Extra and 560 WQAM, is set for 1 p.m.