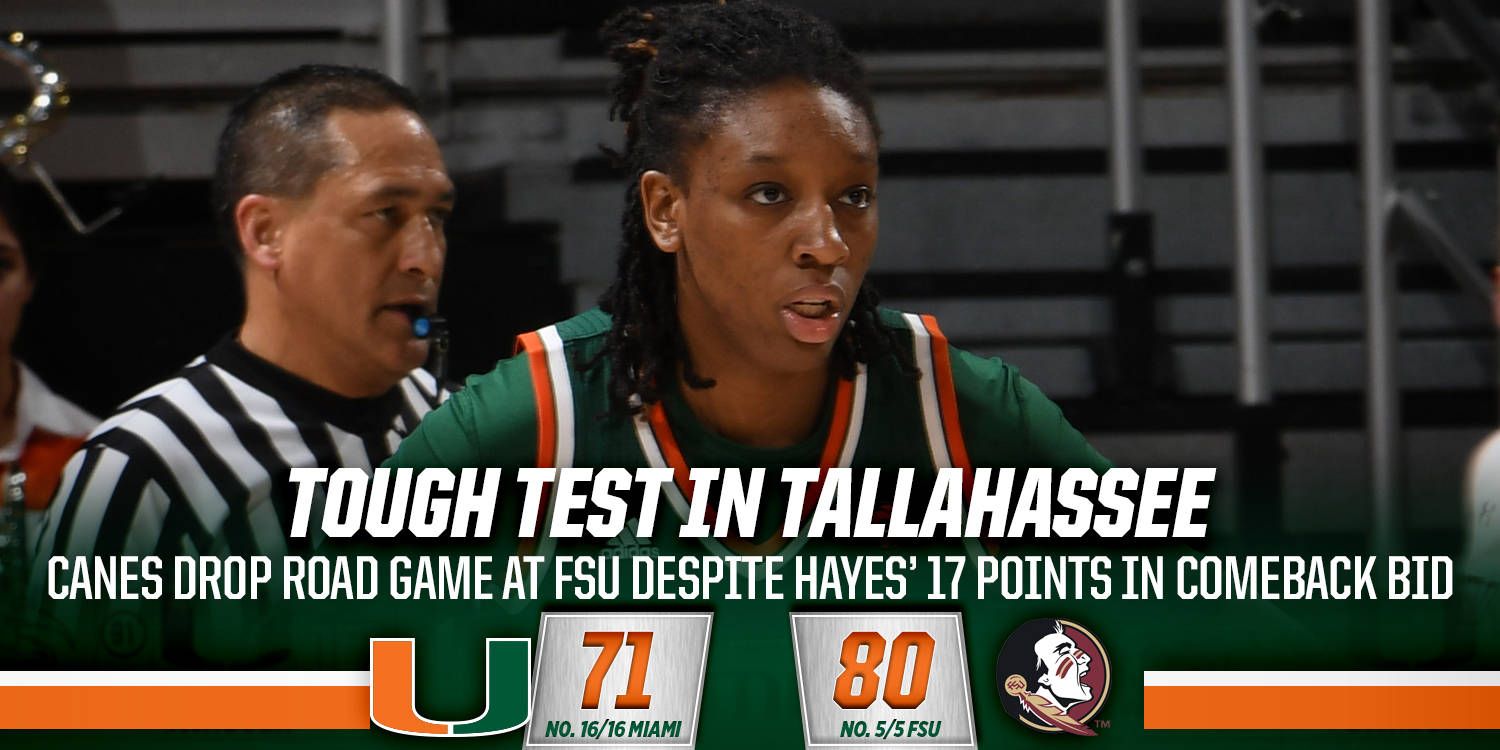 No. 16/16 Miami (17-6, 6-5 ACC) stormed all the way back from a 15-point deficit to tie the game before dropping an 80-71 decision at the Donald L. Tucker Civic Center. Redshirt senior forward Keyona Hayes paced the Hurricanes with 17 points, her fourth-most of the season, in the defeat.

I think that was a pretty high-level basketball game. Tons of physicality, tons of players making plays and hitting big shots,” Miami head coach Katie Meier said. “. . . At the end, it kind of got away from us. I think we were toe-to-toe, punch-for-punch, ready to battle. Some pretty big-time basketball players out on that court tonight. I thought it was very, very high-level and it didn’t disappoint. I mean, it is Miami and Florida State, two ranked teams and both deservedly so.”

The Seminoles stretched their lead to 15 points, 35-20, with 5:13 left in the second quarter, but Miami quickly responded. The Hurricanes then went on a 12-5 run, holding Florida State without a field goal for the final three minutes and 18 seconds of the half.

Early in the second half, Miami continued to chip away at the Florida State lead, pulling to within three, 42-39, with 5:59 on the third period clock on after a prolonged 19-7 run. In total, the Hurricanes went six minutes and 22 seconds during that stretch without allowing a field goal, including five minutes and nine seconds without conceding a point.

Miami trimmed the deficit to two during the third quarter and trailed by three, 54-51, when it came to a close after a buzzer-beating layup by junior forward Khaila Prather.

The Hurricanes were unable to get any closer than three down the stretch and the Seminoles held on for the nine-point victory.

“I love my team; I loved our fight,” Meier said, “but I’m not satisfied with ‘almost.’”

Senior guard Jessica Thomas was the second Hurricane to score double-digit points, finishing with 16. Junior forward/center Erykah Davenport’s nine points were her most in an ACC game this season.

This was just Florida State’s third single-digit victory of the season, joining a seven-point win over No. 9/8 Louisville and a six-point triumph at Georgia Tech.

Miami will now return home to Coral Gables, Fla., where it will host Virginia Thursday night at 7 p.m., at the Watsco Center.

·         For the first time since Jan. 11 against No. 15/16 Virginia Tech and Jan. 15 at No. 9/8 Louisville, Miami used the same starting lineup in a second consecutive game. As was the case in those two outings, the Hurricanes opened with Davenport, junior forward Keyanna Harris, Hayes, senior guard Adrienne Motley and Thomas.

·         This was Miami’s ninth game of the season against a ranked opponent, including the fifth versus a top-10 opponent. Seven of those nine contests have come in ACC play.

·         With her 17 points against the Seminoles, Hayes now has 996 points in her collegiate career, just four shy of becoming the third active Hurricane with 1,000.

·         Hayes eclipsed both 2,500 minutes played and 400 field goals made as a Hurricane, sophomore guard Laura Cornelius surpassed 1,250 minutes played in her career, Motley reached 300 assists as a collegian and Prather reached 150 points at Miami.