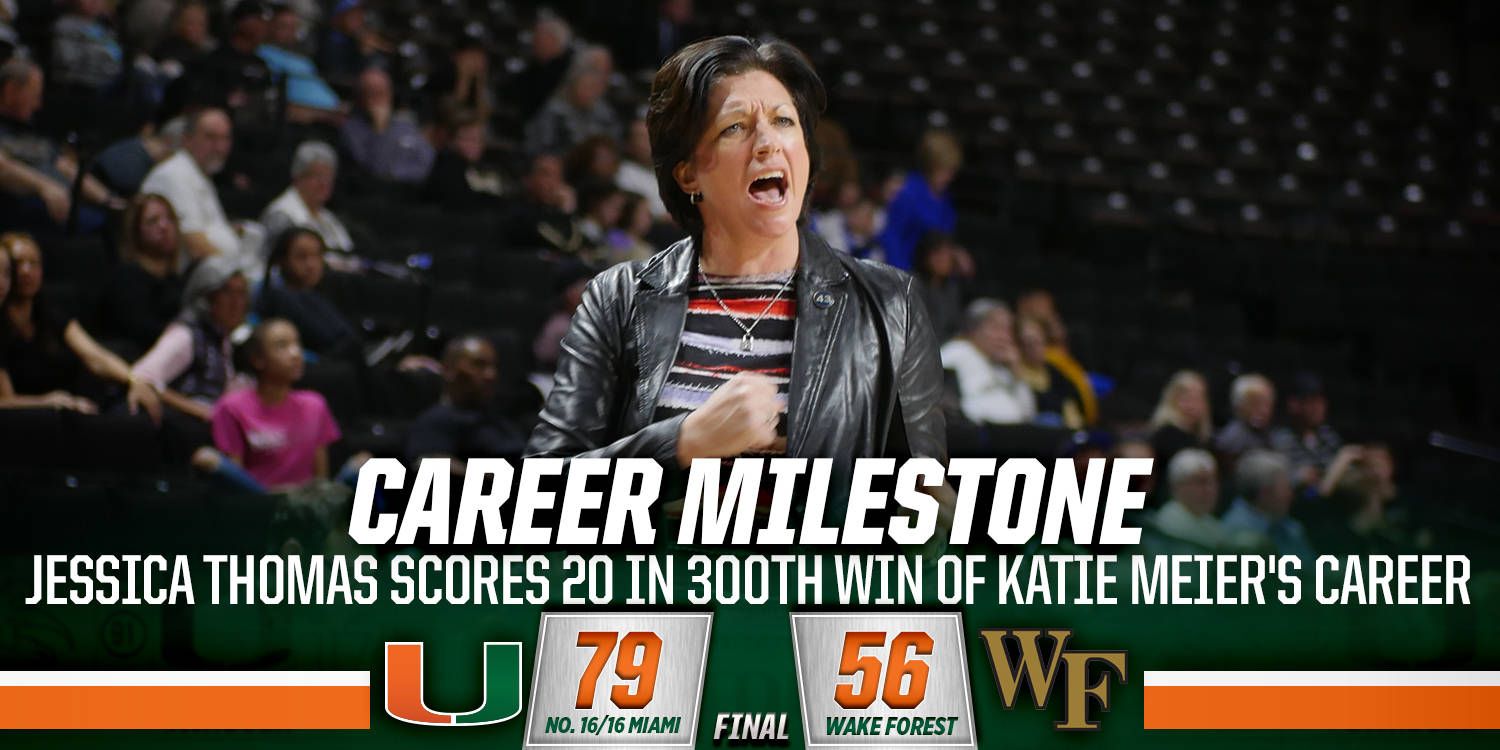 “I’ve been the head coach at two wonderful places with great administrations,” Meier said of Miami and Charlotte. “A coach’s longevity or however many wins you have after so many years—somebody stuck by you and believed in you. Neither place did I show up and win right away. So, I have had faith and support and great players and assistant coaches. You can tell how great my assistants have been by how successful they are as head coaches.”

Miami built a quick 13-4 lead and the Demon Deacons called timeout just four minutes and five seconds into the game. The Hurricanes’ lead would stand at five, 19-14, after a first quarter that ended with a buzzer-beating basket in the paint by Wake Forest (13-9, 4-5 ACC) senior forward Milan Quinn.

In the second period, the Demon Deacons used a 9-0 run to surge ahead by three. Miami then scored five of the final seven points of the half, with redshirt junior guard/forward Shaneese Bailey’s buzzer-beating runner evening the score at 31 entering the intermission.

Wake Forest sophomore guard Ariel Stephenson scored 18 points in the first half, tied for the second-most Miami allowed to one player in a half this season and tied for the highest total before the break.

The Hurricanes opened the third period on a 13-4 run, including seven consecutive points in a span of 53 seconds, to grab a nine-point lead, 44-35, just four minutes and one second into the frame.

Miami held Wake Forest without a point for the final four minutes and 32 seconds of the the session, closing on a 12-0 run in the last three minutes and seven seconds. The Hurricanes outscored the Demon Deacons by 18 points, 27-9, in the quarter and led, 58-40, entering the fourth period.

In the final quarter, Miami only continued its strong play, extending the lead to as many as 24 points, en route to its second ACC win of the year by over 20 points. For Wake Forest, the 23-point margin was its second-largest defeat of 2016-17.

“Our energy and [focusing on] what was important,” Meier said of what changed in the second half. “We were so focused on things that weren’t really that important; whether the shot was going to go in, our timing and stuff. We had to focus on what was important, which was defensive energy and scoring points in the paint . . . At halftime, I went at them as hard as I have gone at them all year.”

Thomas had four assists and a season-high four steals to go along with the seventh 20-point outing of her career and fourth of the year. Fellow senior guard Adrienne Motley tallied 16 points and a co-game-high five assists for the Hurricanes, while junior forward Keyanna Harris added 10 points.

Sophomore forward/center Emese Hof logged a game- and season-high nine rebounds, the most she had in an ACC game in her career.

Stephenson, the lone Demon Deacon in double figures, led all scorers with a career-high 24 points, as Miami limited her to six in the second half, including zero in the third period. The Hurricanes held sophomore forward Elisa Penna, Wake Forest’s leading scorer, to three points on 1-of-8 shooting.

Miami logged a season-high-tying 19 steals and forced Wake Forest into a season-high-tying 29 turnovers. The Hurricanes now have 38 steals in the past two games after tallying 35 in the prior five games combined. Additionally, Miami has forced 63 turnovers in the last two contests after forcing 54 in the previous four.

The Hurricanes’ next game will be a rare Monday conference matchup, as they take on No. 6/5 Florida State at 7 p.m., in Tallahassee, Fla.

·         The Hurricanes now have four victories on the road this season against teams that are either ranked or receiving votes in the USA TODAY Coaches Poll.