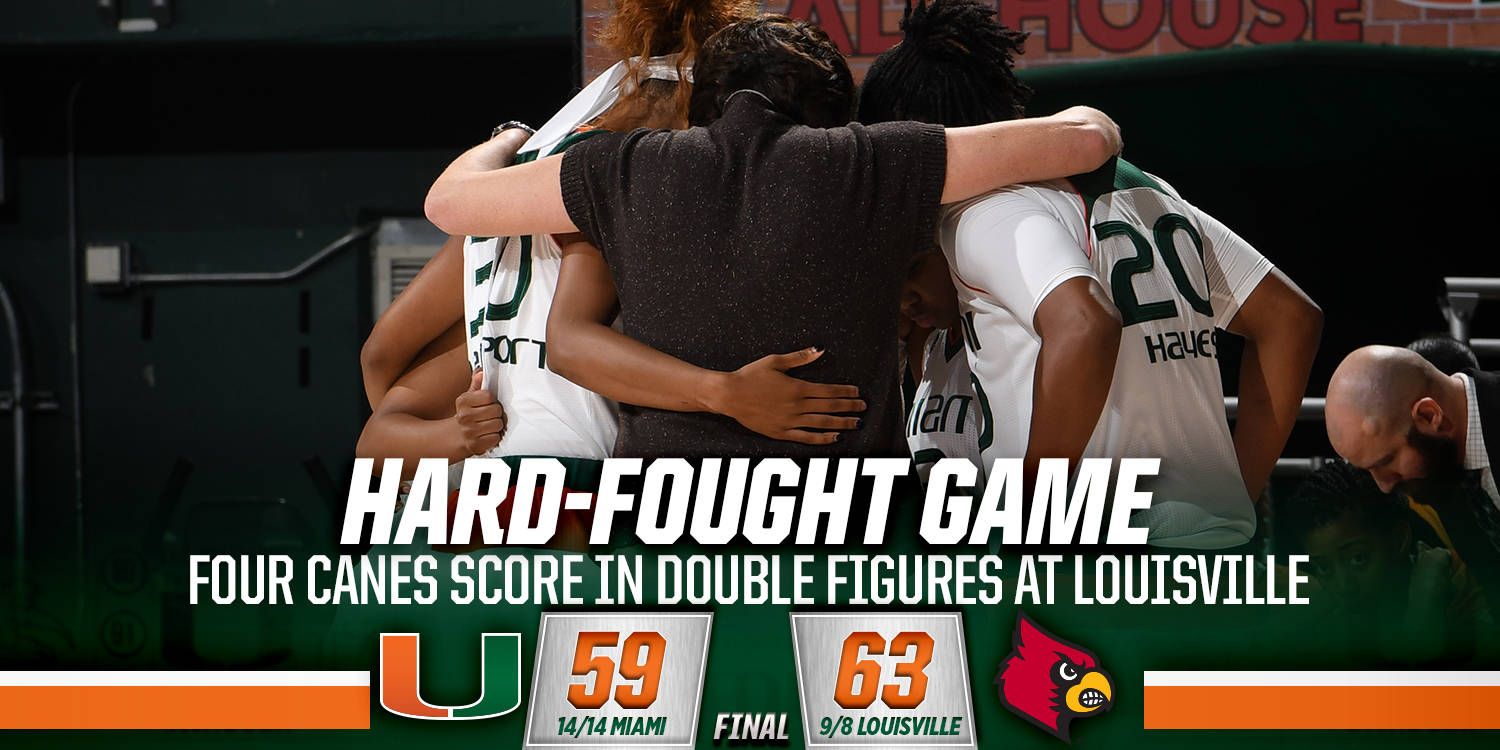 Senior guard Adrienne Motley‘s 13 points paced a quartet of players who finished with double-digit points for No. 14/14 Miami (14-4, 3-3 ACC) in a game televised on ESPN2 from the KFC Yum! Center.

“The other games we lost this year we didn’t play with our identity. If things didn’t go well on the offensive end we didn’t really respond with a toughness,” Miami head coach Katie Meier said. “I thought today we were point-blank missing shots in the first quarter, but that didn’t knock us out. In those other games, there would be a stretch where we would miss shots and it was in our head for three or four possessions, but we had short-term memory today and we kept battling, we stayed confident. I thought it was a great basketball game.”

Louisville (16-4, 4-2 ACC) used strong offensive rebounding in the opening period to build an 18-11 advantage through 10 minutes of play.

Miami held the Cardinals scoreless for the first four minutes and 50 seconds of the second period, making it a stretch of six minutes and 12 seconds extending back to the first frame. A 3-pointer by senior guard Nigia Greene with 5:54 left in the half helped Miami pull within two points—this time at 18-16—for the first of three times in the frame.

Louisville’s lead grew back to seven, 32-25, entering the break after junior forward Mariya Moore connected on a 3-pointer in the closing seconds.

During the third period, Louisville took its largest lead of the game, 47-38, but the Hurricanes promptly responded with a 5-0 run over the final two minutes and 27 seconds of the session and trailed by just four, 47-43, entering the last quarter.

“We made a great run, I thought, at the right time,” Meier said. “I went into the fourth quarter saying we are exactly where I expected us to be and wanted us to be, which was down four. I was more than happy with where we were on the road. I thought we were just going to play well and we were going to make plays down the stretch and steal a really important basketball game.”

The Hurricanes trimmed their deficit to one, 60-59, for the first time all game on a jumper by redshirt senior forward Keyona Hayes with 1:21 to play. Miami was held scoreless the rest of the way and the Cardinals pulled out the four-point win, their second-smallest margin of victory on the season.

In addition to leading Miami in scoring, Motley had a game-high six assists and a season-high, co-team-high six rebounds. She also ascended past Tamara James (2002-06) and tied Desma Thomas (1992-97) for fourth place on Miami’s all-time 3-pointers made list with 152.

Moore paced all scorers with 24 points for the Cardinals. Redshirt senior guard Briahanna Jackson finished with 11 and junior forward Myisha Hines-Allen, the Preseason ACC Player of the Year, posted a double-double with 11 points and 10 rebounds.

·         Miami had a 23-6 advantage in bench points, marking the 16th time in 18 games the Hurricanes’ bench outscored that of their opponent. It is the 11th time Miami has had a margin of at least plus-10 in bench scoring.