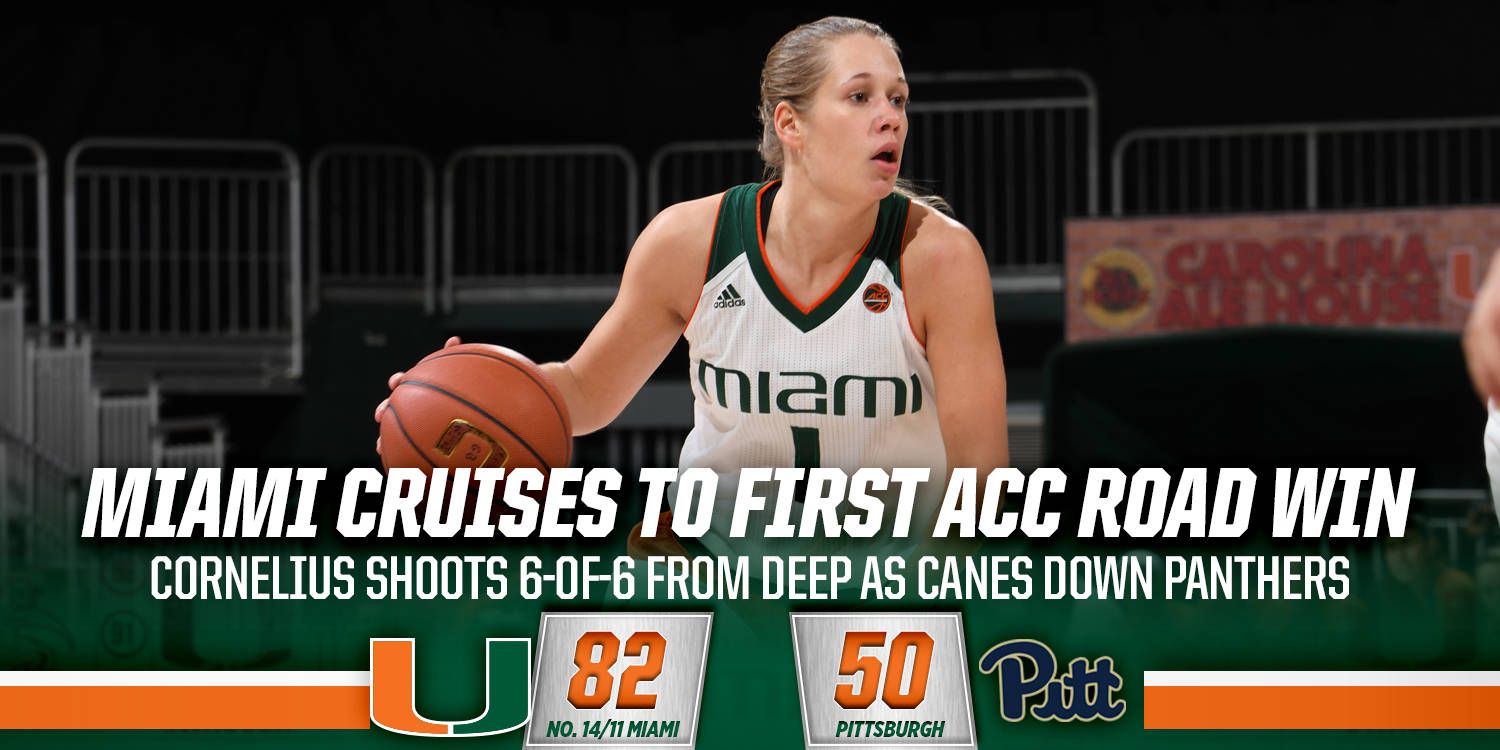 PITTSBURGH – The University of Miami women’s basketball team earned a victory in its ACC road opener for the third time in four years with a dominant 82-50 triumph at Pittsburgh Monday night.

“Perfect from the field—just an incredible performance,” Miami head coach Katie Meier said of Cornelius. “She was just very focused. It was [mostly] a flawless basketball game . . . from a high-level point guard, who was reading the defense very, very well. I thought she was sharing the ball well, besides just scoring. I think our team . . . knew Laura was hot and they just kept getting her the ball.”

The Hurricanes forced Pittsburgh (9-5, 0-1 ACC) into 11 turnovers in the first period and built a 13-point lead, 24-11, through 10 minutes. Miami closed the opening quarter on a 16-2 run, including scoring each of the final 10 points over the last three minutes and 18 seconds of the session.

In the second period, Miami continued its strong play and stretched its advantage to up to 26, 48-22, entering halftime. The Hurricanes finished the half on a 19-2 run over the final six minutes and 27 seconds, including making seven consecutive shots, scoring 19 unanswered points and holding the Panthers scoreless for a span of six minutes and 19 seconds.

Cornelius scored 19 points in 14 minutes of first-half action, including notching 16 in the second period alone. She connected on all six of her field goals, five of which were from 3-point range, and both of her free throws before the break.

Miami pushed its edge to as many as 31 points in the third period, but a surge by Pittsburgh made it 64-40 at the end of the frame. The Hurricanes’ final basket of the period was a 3-pointer by Cornelius, her sixth and final one of the game, giving her a 6-of-6 mark from 3-point range for the second time in her career, something no other Hurricane has done even once.

In the final session, the Hurricanes kept up their impressive performance at both ends and their lead ballooned to as many as 33 points. The 32-point victory was Miami’s fourth by 30-plus points this season. The Hurricanes last won an ACC game by at least 30 on Jan. 10, 2016, when they registered an 83-49 victory at Clemson.

“Come ACC play, you transition responsibility for effort, defense and rebounding to your upperclassmen,” Meier said. “If you are trying to get through this grueling ACC season as a coach, and you have to do effort drills in practice, you are going to burn your legs out . . . We use the quote, ‘You can’t be tough, without being aware.’ And we were just a little unaware in our last game, so we wanted to make sure we were focused so our toughness had a purpose to it.”

Along with Cornelius, whose 24 points were the most by a Hurricane this season, senior guard Jessica Thomas also notched a double-digit point total, finishing with 10.

The lone Panther with double figures in scoring was graduate student center Brandi Harvey-Carr, who had 14. Sophomore forward Brenna Wise, Pittsburgh’s leading scorer, was limited to seven points on 1-of-6 shooting from the field.

The Hurricanes will play their second straight road game Thursday at 7 p.m., in Raleigh, N.C., against NC State, which has defeated top-six opponents in each of its first two ACC outings.

·         With the victory, Miami is now 20-9 all-time against Pittsburgh, making the Panthers the fourth opponent the Hurricanes have at least 20 wins against, along with Boston College, FIU and USF. Miami is 13-3 over the past 16 meetings versus Pittsburgh, including 8-1 in the last nine, and this was the largest margin of victory in the series , which dates back to 1982.

·         Cornelius’ 6-of-6 mark from 3-point range marked the 18th time a Hurricane has made at least six shots from beyond the arc in a game and the third time she has done so. Cornelius is one of eight Miami players to reach six made 3-pointers in a contest. As aforementioned, it is the second time she has made six 3-pointers in an outing without a miss, something no other Hurricane has ever done.

·         Redshirt senior forward Keyona Hayes scored the Hurricanes’ first four points of the game, connecting on her first two shots from the floor to give her 18 consecutive made baskets against Pittsburgh dating back to last season. She shot 16-of-16 in two meetings versus the Panthers in 2015-16.

·         Cornelius eclipsed 1,000 minutes played and 100 field goals made, plus reached 300 points as a collegian, Thomas moved past 300 rebounds in her career and senior guard Nigia Greene surpassed 300 points at Miami, while junior guard Neydja Petithomme recorded her first point as a Hurricane.