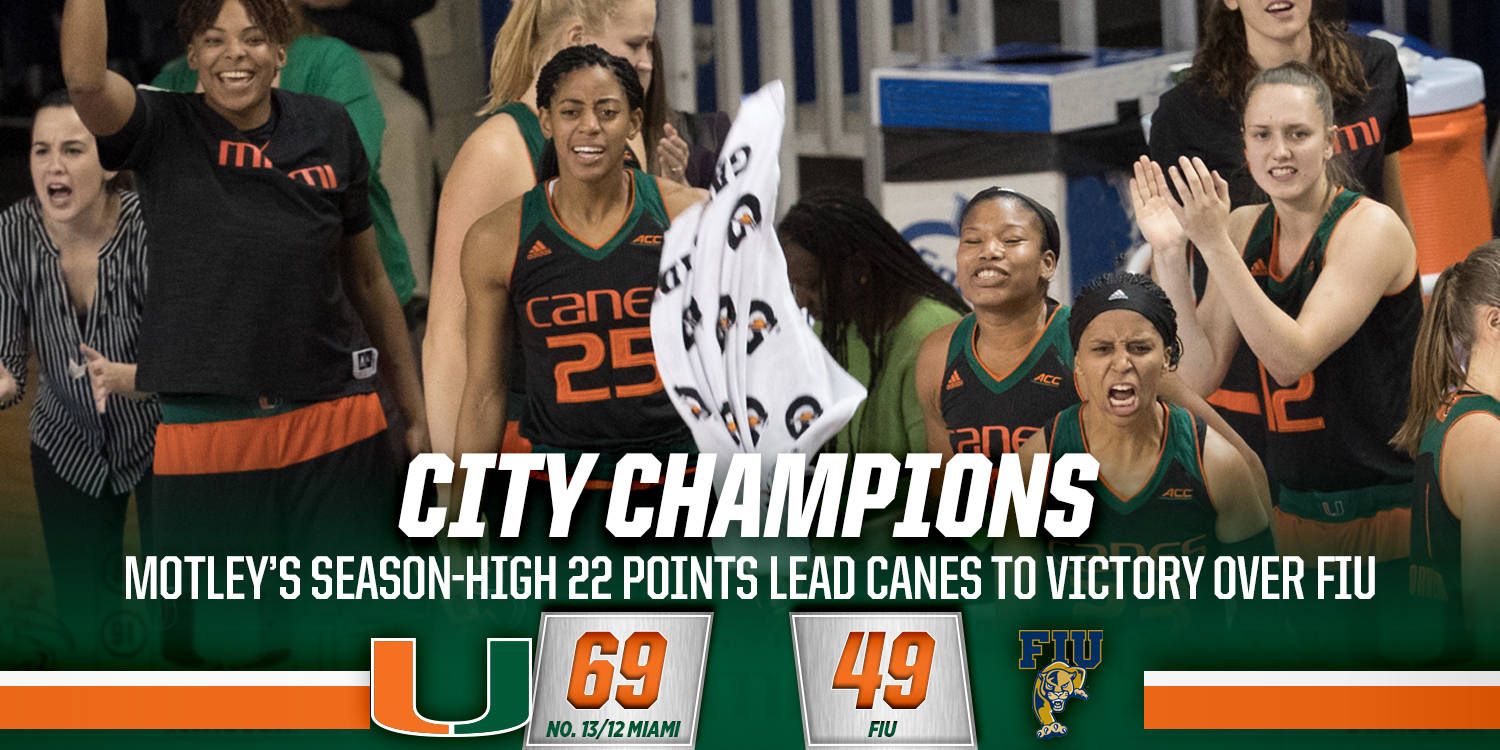 MIAMI – Playing on the road at FIU for the first time in eight years, the University of Miami women’s basketball team recorded a 69-49 victory Friday night at Lime Court at FIU Arena.

Led by a season-high 22 points from senior guard Adrienne Motley, who scored 14 in the first period alone, No. 13/12 Miami (9-1) topped its crosstown opponent to earn its ninth win in a row

“Her mother surprised her at shootaround and I saw a smile and a little lift. She was really excited,” Miami head coach Katie Meier said of Motley. “Then, she just started the game very focused, with great rhythm, great pop. I played her a ton because she’s needed a game like this.”

The Hurricanes hit their first three 3-pointers of the game, with two coming from Motley, en route to taking a 19-9 edge after fewer than five minutes of play. Motley would finish the first period with 14 points on 5-of-6 shooting to help Miami take a 23-20 advantage through 10 minutes.

In the second session, the Hurricanes continued to extend their lead over FIU (1-7). A 3-pointer by junior forward Keyanna Harris with 16 seconds left would be the final basket of the half and give Miami its then–largest lead of the night, 44-33, entering the locker room.

After closing the first half with a 3-pointer, Miami opened the second the same way, as Thomas connected on a shot from long range just 59 seconds in. The Hurricanes would go on to build a 16-point advantage, 57-41, after three periods.

The Hurricanes stretched their lead to as many as 21 points in the final quarter before registering the 20-point win, their fifth victory by at least that margin so far this season.

In addition to Motley, who tied Krystal Saunders (2010-14) for No. 10 on Miami’s all-time 3-pointers made list with 132, freshman guard/forward Sarah Mortensen also logged a season high in the scoring column. The Copenhagen, Denmark, native registered 12 points and shooting 3-of-3 from beyond the arc.

“Sarah Mortensen was fantastic and timely,” Meier said. “She didn’t get these threes when we were up 20 or something. She got threes that we needed because we were on the ropes. Her offensive rebounding was amazing.”

Thomas finished with 12 points, leading all players with a season-high-tying five assists in the victory.

Miami, which trailed for just 17 seconds of action, all early in the first period, held FIU to 9-of-35 shooting (25.7 percent) in the final three periods after it was 8-of-17 (47.1 percent) in the opening frame. This was also the second straight game and third time this year the Hurricanes held their opponent under 50 points.

“Laura [Cornelius] had to get in there and rebound,” Meier said. “Keke Harris hit a couple of big shots. We had some hero plays from unexpected people.”

The Hurricanes now head back to the Watsco Center, where they will host the Miami Holiday Tournament Monday and Tuesday. Miami begins play on the opening night against Coppin State at 5 p.m.

·         Miami is now 35-22 all-time against FIU, both playing and defeating the Panthers more than any other opponent.

·         Junior guard Neydja Petithomme, who joined the team as a transfer from Auburn after the semester break last winter, made her Miami debut in the victory.