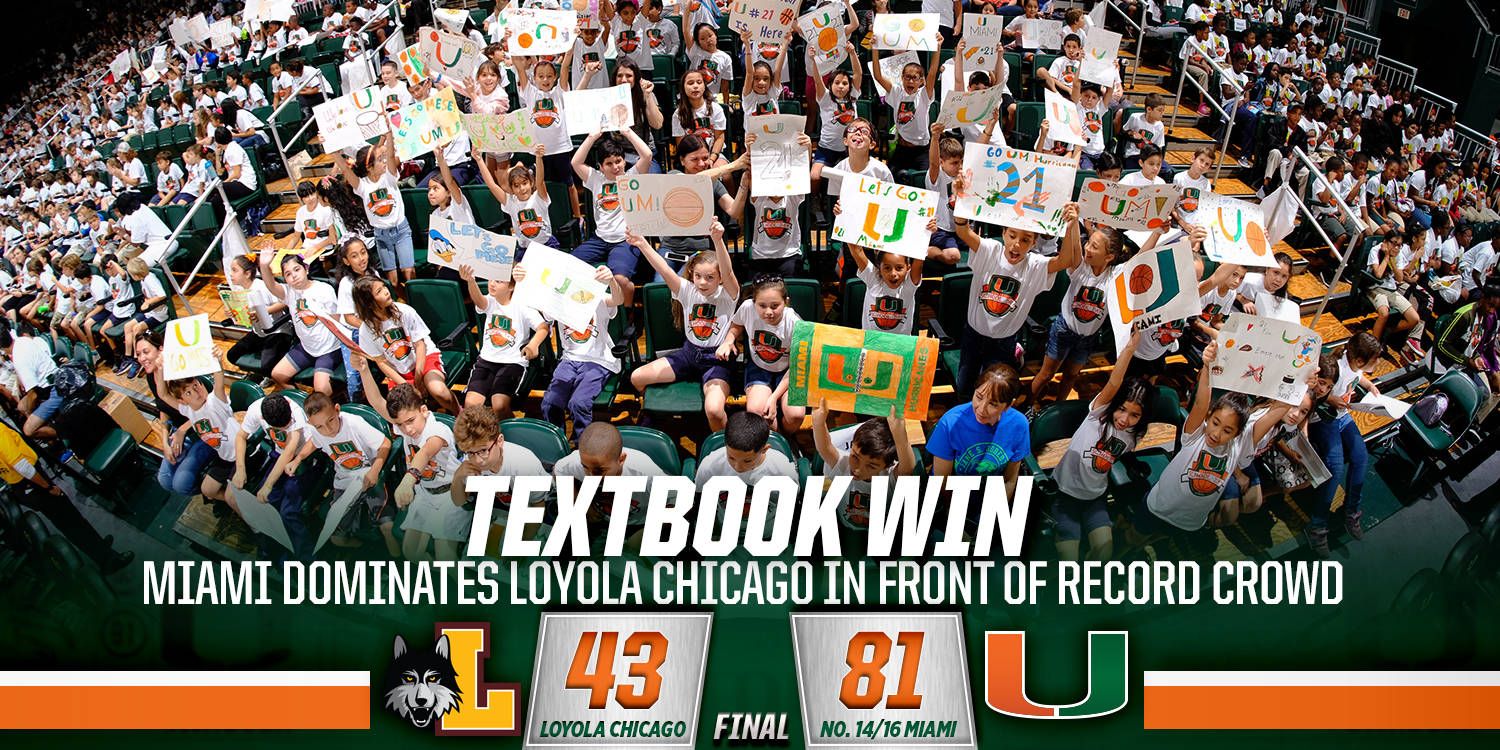 CORAL GABLES, Fla. – The University of Miami women’s basketball team notched its eighth win in a row Tuesday, registering an 81-43 triumph over Loyola Chicago at the Watsco Center.

Playing in front of a program record crowd of 4,989, No. 14/16 Miami (8-1) outscored the Ramblers by 21 points in the third period to roll to victory. Senior guard Nigia Greene led the way for Miami with a season-high 14 points and made a career-high four 3-pointers.

“We like to be role models; we expect to be role models,” Miami head coach Katie Meier said of the third annual Elementary School Day. “[Our players] have pressure on them every day to be great people, great citizens. And to have all those kids looking at them, screaming their names and making posters for them and everything [was great]. We don’t take that lightly, we know. We are very, very appreciative of our administration, our University and our athletic department.”

Freshman guard/forward Sarah Mortensen connected on the first two 3-pointers of her career on consecutive offensive possessions to close the first period and give Miami a 20-11 lead after 10 minutes of action.

Senior guard Adrienne Motley made a jump shot with 3:33 left in the second quarter to give her 1,501 points in her career, making her the ninth Hurricane to surpass 1,500.

Miami, behind 10 first-half points from sophomore guard Laura Cornelius, would go on to take a 32-22 advantage over Loyola (0-8) at the intermission.

The Hurricanes used a 27-2 run in the third period to stretch their lead to 33 points, 59-26. The run included four 3-pointers, with three of them by Greene. Miami held Loyola without a point for a span of five minutes and 11 seconds, en route to a 61-30 advantage entering the final quarter.

“We talked about it at halftime,” Meier said of not passing up shots. “I said, ‘I’ll be more clear.’ This is who we are. We shoot threes; that is what we do. So Gia I could just see her face relax, like, ‘wow.’”

Along with Greene, who also tied career highs in rebounds (four) and steals (three), three other Hurricanes scored in double figures, too. Cornelius posted 13, Motley added 12 and junior forward/center Erykah Davenport logged 10 to go along with her game-high nine rebounds.

“The game was a little bit bigger then the outcome,” Meier said, referencing the thousands of youth in attendance. “. . . In the end our depth obviously overwhelmed [the Ramblers]. And just our excitement level—we were just really excited and grateful to play today.”

Junior guard/forward Katie Salmon was the lone Rambler to finish with double-digit points, as she posted 12.

Miami will now have nine days without a game before returning to the hardwood Dec. 16 when it goes on the road to face FIU in Miami at 7 p.m.

“It’s great,” Meier said of the upcoming break. “Normally you are working through some stuff early in the schedule, but this schedule was so hard that we [still do] need to work through some stuff. We’ve got to go back to the fundamentals.”

·         All 12 healthy, eligible Hurricanes played and registered at least two points in the victory.

·         Davenport logged eight-plus points for the ninth straight game to open the season, furthering the longest such streak of her career, which was previously two.

·         In addition to Motley eclipsing 1,500 points in her career, Cornelius surpassed 250 points as a collegian, Greene moved past 100 made field goals at Miami, junior forward Keyanna Harris reached 50 steals as a Hurricane and redshirt junior guard/forward Shaneese Bailey surpassed 1,250 minutes played in her career.