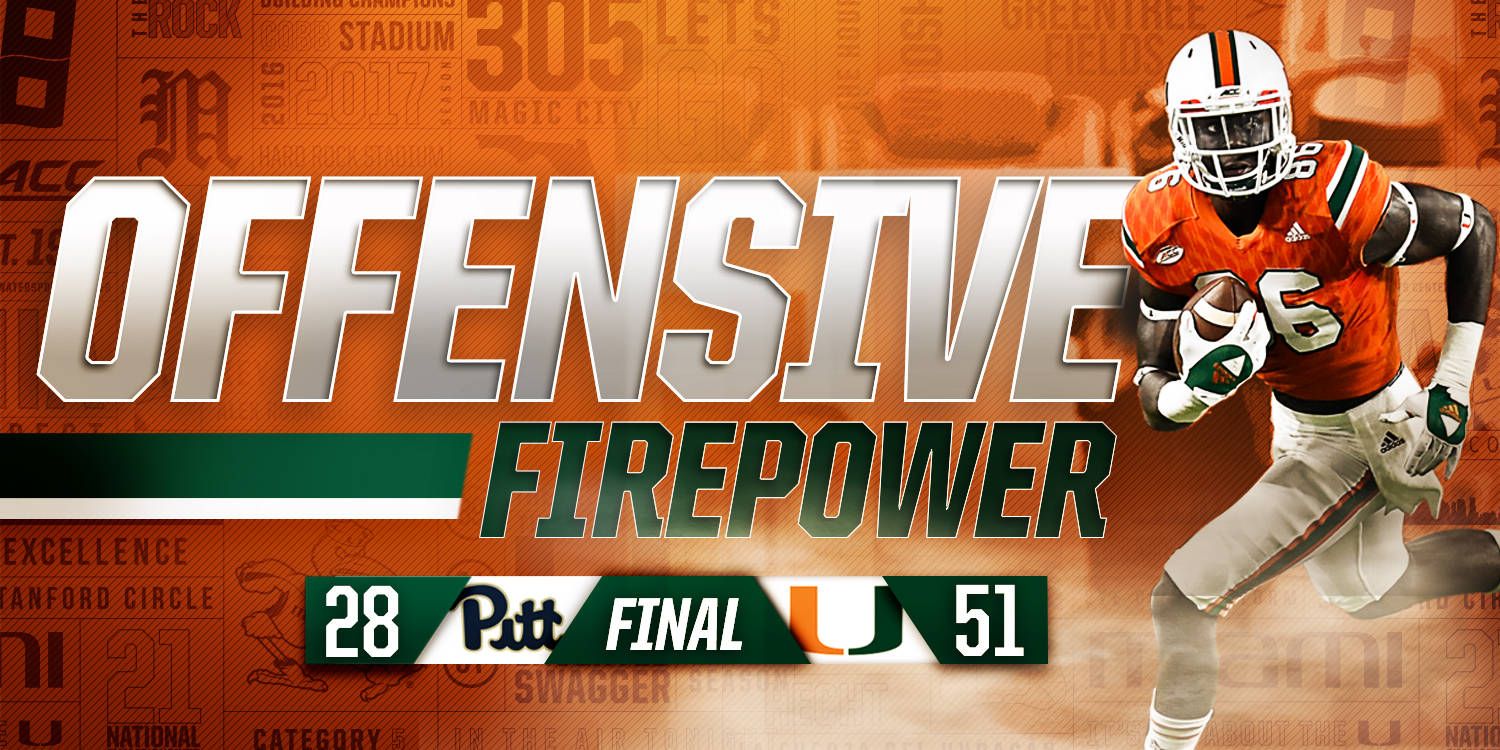 Canes Erupt for 51-28 Victory Over Pitt

Kaaya threw for a career high-tying four touchdowns and added just the fourth rushing touchdown of his career, accounting for 373 total yards in the win. The Hurricanes, who outgained the Panthers 534-417 in an offensive slugfest, beat Pittsburgh for the 10th time in its last 11 head-to-head matchups.

Sophomore running back Mark Walton sealed the victory with a 55-yard touchdown run with 2:12 remaining, putting Miami over the 50-point mark for the second time this season in front of 51,796.

Kaaya set a career high with 32 completions, nine of them to senior wide receiver Stacy Coley.

Leading 27-21 at the half, Miami (5-4, 2-3 ACC) recorded a turnover on the second play of the second half to take momentum. A fumble forced by sophomore Kendrick Norton was recovered by junior Chad Thomas, and three plays later, Kaaya hit Coley on a 3-yard pass in the back of the endzone to give the hosts a two-score lead.

Pittsburgh (5-3, 2-3 ACC) would not go quietly. Trailing 41-21 after Kaaya’s fourth touchdown pass of the game with 13:38 to go, Panthers quarterback Nathan Peterman responded with a 75-yard touchdown to a wide-open Jester Weah on the first play of the ensuing drive.

But Miami’s defense held, as the Weah touchdown marked the only points allowed in the second half. The Hurricanes outscored Pittsburgh 24-7 over the game’s final 30 minutes, and the UM defense forced two turnovers and totaled six tackles for loss totaling 28 yards.

A 25-yard field goal from kicker Michael Badgley pushed Miami’s late lead to 44-28, and Walton put on the finishing touches with his long scoring run.

After slow starts in each of the team’s past three games, the Miami coaching staff decided to upgrade the tempo of the beginning of practice.

The decision paid off.

Thanks largely to a 250-yard first half from Kaaya, the Hurricanes jumped out to a 27-21 lead after two quarters.

Miami marched 75 yards down the field on its opening drive, which was capped by a 12-yard touchdown pass from junior quarterback Brad Kaaya to redshirt sophomore tight end David Njoku.

A 100-yard kickoff return by Pitt’s Quadree Henderson on the ensuing kickoff quickly tied the score 7-7, but Miami retook the lead on a 77-yard drive that resulted in Kaaya’s second touchdown pass of the day.

Kaaya opened the afternoon with 13 straight completions before misfiring on a fade pass to wide receiver Stacy Coley in the end zone.

A pair of Pitt touchdowns sandwiched around a 48-yard field goal by Michael Badgley briefly gave the visitors a 21-20 lead, but Kaaya’s first rushing touchdown of the season put the Hurricanes ahead 27-21 with 6:05 remaining in the second quarter.