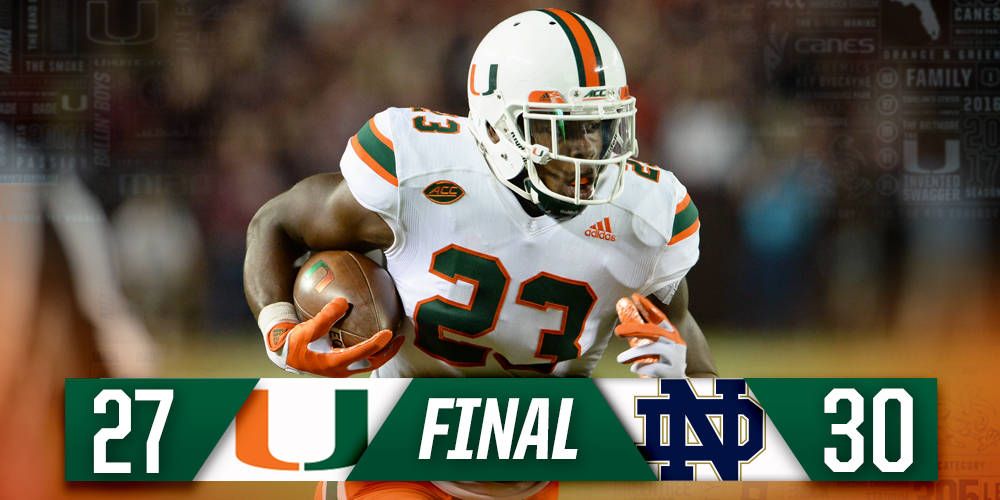 Notre Dame, Ind. — The University of Miami staged an impressive comeback Saturday night at Notre Dame Stadium, but ultimately fell to the host Fighting Irish by a final score of 30-27.

The Hurricanes (4-4) scored 27 straight points after trailing by 20 and briefly took a fourth-quarter lead, but the Irish scored on their final two drives – including a 23-yard field goal by kicker Justin Yoon with less than a minute left – to seal the victory.

Sophomore defensive back Michael Jackson recovered a fumbled punt in the end zone to put Miami ahead with 6:49 remaining in the fourth. But Notre Dame responded with a touchdown drive that took less than a minute, and clinched the win on their final drive that culminated with Yoon’s third field goal of the game.

For the first 20 minutes of the latest chapter in one of college football’s great rivalries, it appeared Notre Dame would cruise to a fourth straight victory.

Jackson briefly put Miami ahead on a punt that deflected off Notre Dame and bounced into the end zone, but the Irish (3-5) tied the game at 27 when Josh Adams scored on a 41-yard run.
After starting his day just 4-for-12 with an interception, junior quarterback Brad Kaaya enjoyed a strong showing the rest of the way.

Kaaya finished the game 26-for-42 for 288 yards. He was sacked on the game’s final play, as Miami lost its fourth straight overall.

Kaaya hit freshman Ahmmon Richards for 24 yards on the first play of the drive, and after a pass interference in the end zone put Miami on the 2-yard line, redshirt sophomore tight end David Njoku made an athletic play on a lofted pass for Miami’s first points of the game.

Momentum continued when Miami’s kickoff unit surprised the Irish with an onside kick that was recovered by senior Jamal Carter, but Notre Dame sacked Kaaya on a 3rd-and-10 play on the ensuing drive to force another punt.

The Hurricanes scored on their opening drive of the second half when sophomore Mark Walton rushed it in from one yard out. Kicker Michael Badgley then hit field goals of 43 and 38 yards to tie the game with 12:30 remaining in the fourth quarter.

Miami’s offense struggled to generate any momentum in the game’s early stages, totaling 29 yards on its first five drives, resulting in four punts and an interception.

Looking to cut deeper into the 20-7 deficit, the Hurricanes got the ball back with 2:56 remaining on their own 19. Miami drove to the Notre Dame 34 – chunk yards coming on passes to Njoku and a long run by Walton – but the Irish stopped Joe Yearby on a 4th & 1 rush to take over on downs.

Notre Dame scored on its first three drives to jump out to a 17-0 lead.

Quarterback DeShone Kizer shoveled a pass to Torii Hunter for the first touchdown of the game, while Justin Yoon connected on a 37-yard field goal to push the lead to 10-0.

A 14-yard pass from Kizer to receiver Equanimeous St. Brown marked Notre Dame’s final touchdown of the first half.