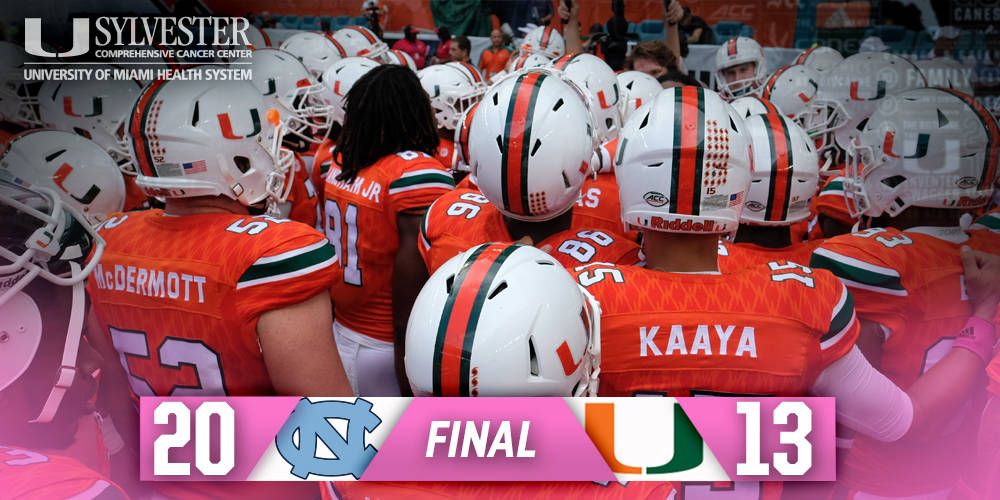 MIAMI GARDENS, Fla. — A second-half comeback effort by No. 16 Miami was thwarted Saturday afternoon, as ACC divisonal foe North Carolina held on for a 20-13 win at Hard Rock Stadium.

Trailing by 17 points at halftime, the Miami defense stood tall against a talented Tar Heels offense over the final two periods while the offense cut into the three-possession deficit.

Having outscored North Carolina 10-0 over the final two periods, Miami (4-2, 1-2 ACC) received a punt with under two minutes remaining in the game trailing by just a touchdown. But a strip-sack of Kaaya recovered by North Carolina with 1:27 remaining ended the comeback effort in front of 58,731.

Facing their biggest deficit of the year in the second half, the Hurricanes would not go quietly.

A streak of four straight three-and-outs was snapped by the Miami offense was snapped on a four-play, 61-yard drive with less than five minutes remaining in the third quarter.

Quarterback Brad Kaaya hit freshman Ahmmon Richards for a 30-yard gain up the right sideline, junior Christopher Herndon IV followed with a 26-yard catch, and after a 3-yard rush from sophomore running back Mark Walton, junior Joe Yearby plunged in from two yards out to cut the margin to 20-10.

Miami’s defense allowed a 74-yard drive to the Tar Heels but held firm on a 4th-&-1 quarterback run from the goal line on North Carolina’s first drive of the fourth to keep things interesting.

Two possessions later, the Hurricanes strung together a 13-play drive that resulted in a 22-yard field goal by junior kicker Michael Badgley, as Miami inched closer at 20-13.

That was as close as the Hurricanes would get, however, as Carolina’s Malik Carney took down Kaaya on the second play of Miami’s final drive to seal the win.

Kaaya finished the game 16-for-31 for 224 yards with no touchdowns or interceptions.

The Tar Heels (5-1, 3-1 ACC) jumped out to a commanding early lead, scoring the first points allowed by Miami in the first quarter all season.

With prime field position after a three-and-out by Miami’s offense on the first drive of the game, the Tar Heels took a 3-0 lead on a 42-yard field goal on their first offensive series of the afternoon.

The Hurricanes responded with a 13-play drive that started with nine straight rushing plays.

Walton and Yearby combined for 51 rushing yards on the drive, but a 35-yard field goal attempt by Badgley was blocked to maintain the deficit.

North Carolina pushed its lead to 10-0 after an impressive 12-play, 80-yard drive that took just over four minutes to complete. Heels quarterback Mitch Trubisky found receiver Austin Proehl in the back of the endzone for a five-yard TD pass on a play that was upheld after review.

The Hurricanes got on the scoreboard on a 47-yard field goal by Badgley six plays into the second quarter.

Miami converted a 4th-&-2 play, with Kaaya hitting David Njoku for 12 yards to keep the drive alive. But two straight incompletions led to the field goal by Badgley, who maintained his perfect career record from attempts between 40 and 49 yards (14-for-14).

The Heels added another field goal by Nick Weiler and a one-yard touchdown pass from Trubisky to Ryan Switzer with less than 30 seconds remaining before halftime to take a 20-3 lead.

Freshman Shaquille Quarterman added a career-best 11 tackles in the defeat.