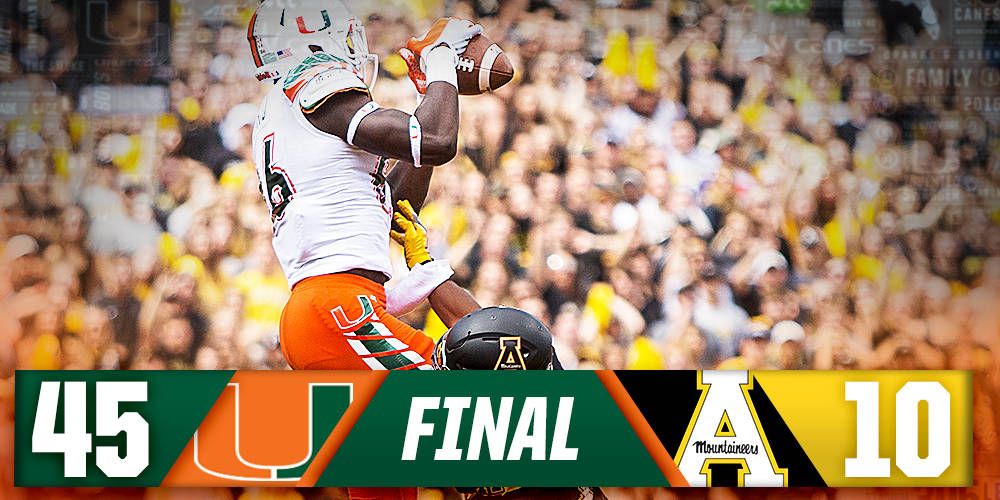 Boone, N.C. — Pregame festivities for what locals had dubbed “The Showdown in Boone” included paratroopers dropping onto the field holding the United States’ colors in front of a Kidd Brewer Stadium-record crowd of 34,658.

All that was missing was fireworks – until the Hurricanes took the field.

Running back Mark Walton took the visitors’ first offensive play from scrimmage 80 yards for a touchdown, and No. 25 Miami used a 21-point first quarter to take early control en route to a 45-10 win over Appalachian State Saturday afternoon.

“I saw him break a tackle and I almost immediately put my hands up like, ‘Touchdown,'” Kaaya said of Walton’s opening touchdown run. “The red sea just parted and he just hit it.”

The victory kept Miami (3-0) undefeated on the season as the team heads into its bye week.

The Hurricanes outgained Appalachian State 549-241 for the game.

Kaaya finished the afternoon 21-for-27 for 368 yards with three touchdowns and one interception, moving past Miami legends Gino Torretta, Steve Walsh and Vinny Testaverde into a tie for third-most touchdowns in Miami history (49). The performance marked the eighth 300-yard game of his career.

“There is a lot of weight on his shoulders, but he handles it well,” Miami coach Mark Richt said.

Walton continued his torrid start to the season with his third straight 100-yard performance. The Miami native totaled 130 yards on 16 carries and recorded two touchdowns to bolster his team-leading total to seven through just three games.

Not to be outdone, Miami’s defense largely dominated the Appalachian State offensive attack. The Hurricanes accumulated 12 TFLs and three sacks, paced by a career-high nine from junior defensive lineman Chad Thomas and seven from senior defensive back Corn Elder.

Kaaya found David Njoku from nine yards out to double the Hurricanes lead with 5:46 to go in the first quarter, and connected with Coley on a 55-yard touchdown on the next drive to push Miami’s lead to 21-0 before the game’s first 15 minutes had elapsed.

Trailing 24-3 at halftime, Appalachian State (1-2) enjoyed a brief swing of momentum when a fourth-and-goal pass from Kaaya was intercepted and returned 60 yards on the first drive of the third quarter.

But the Hurricanes would respond, as Kaaya orchestrated a four-play, 75-yard touchdown drive. The big play came on a 61-yard completion to Ahmmon Richards on a 3rd & 10 play that put Miami inside the Appalachian State 10-yard line.

Junior running back Joseph Yearby scored on a tough run from 12 yards out to cap the drive, putting Miami ahead by three touchdowns halfway through the third quarter.