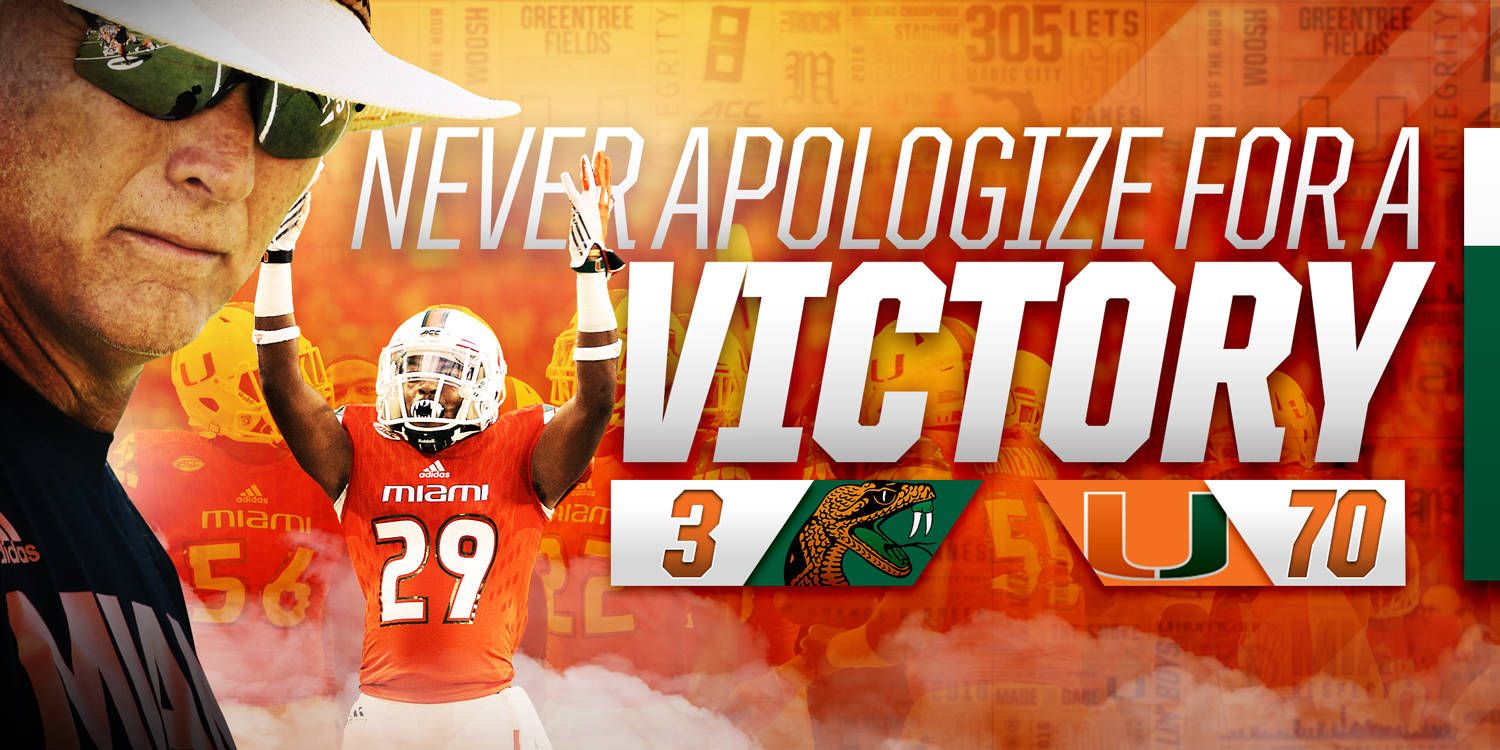 MIAMI GARDENS, Fla. — The Mark Richt era got off to a rocking start for the University of Miami Saturday night at Hard Rock Stadium.

Playing in their newly renovated home under their first-year head coach, the Hurricanes recorded an interception on the season’s third play, scored on a touchdown pass three plays later, and cruised to a 70-3 win over FCS foe Florida A&M in their season opener.

Miami (1-0) added a blocked punt, a punt return for a touchdown, a 46-yard interception return, and a career high-tying four touchdown passes from quarterback Brad Kaaya in Richt’s first win at Miami.

“Just very thankful for the victory,” Richt said. “I thought our guys showed up with the right frame of mind and played very well early on. But I thought towards the mid-second quarter, there were a couple lapses on offense that weren’t really clean.”

Richt, who spent 15 seasons at the helm in Georgia before rejoining his alma mater as head coach in December 2015, improved to 13-3 in season openers.

Despite the energy surrounding his return to Miami, Richt said he was focused on his resumption of play-calling responsibilities.

“I’ve had the ability to kind of focus on the things I can control: the types of plays that we’re going to call, the formations they’re supposed to be in, calling a game for the first time in a while, that’s where all my thought process was,” Richt said.

Richt did acknowledge his emotions during his first pregame Hurricane Walk as head coach.

“That was good. I enjoyed that – just being with the people and seeing the fan base and the families, and just driving in and seeing the traffic,” he said. “There was traffic – that was great. There was a lot of people tailgating throughout the entire parking lot, more than I can ever remember as a player really.”

Quarterman, who ranked second on the team with seven tackles, said he realized the magnitude of the moment on a personal level during pregame warmups.

“I like to kneel down, actually feel the grass with my hands and things,” he said. “That’s when I really got to sit there and think about where I am, where I came from and everything like that. Once we ran through the smoke, I was totally focused and locked in at the task at hand.”

The Hurricanes reached the 70-point plateau for the first time since 2013, while the 42 third-quarter points were the most in program history.

Defensive back Corn Elder sent the 60,703 in attendance into an early frenzy with an impressive interception of Rattlers quarterback Kenneth Coleman on the Florida A&M 30-yard line on the visitors’ opening drive.

After a 25-yard run by Walton on Miami’s first offensive snap of the season, Kaaya hit fullback Marquez Williams from three yards out to give the Hurricanes the lead with 12:33 left in the first quarter.

Miami doubled its lead less than six minutes later, thanks largely to a blocked punt by freshman Pat Bethel that set the offense up at the Rattlers’ 20. Three Walton rushes and a five-yard catch by Braxton Berrios put UM on the 1-yard line, and Yearby plunged in behind a massive block from Williams to make it 13-0.

With the Hurricanes lead up to 21-0 early in the second quarter, Yearby took a handoff 64 yards for a touchdown, marking the longest rush of the junior’s career.

Florida A&M got on the board with a 31-yard field goal with 4:47 to go before halftime.

Kaaya would add touchdown passes of 16, 15, and 4 yards before being replaced by backup quarterback Malik Rosier with 4:04 remaining in the third quarter. Kaaya, who finished 12-of-18 for 135 yards, moved into a tie with Craig Erickson for sixth place in Miami history with 48 career touchdowns.

Miami scored touchdowns on all six of its drives in the third quarter, including a 37-yard rushing score by Walton, a 15-yard receiving touchdown from Richards and a 41-yard punt return from junior Braxton Berrios.

“It was about time, right?” Berrios joked about his first punt return score. “After we blocked that punt, they started ‘rugby-ing’ everything. I kept on being patient, because a lot of times rugby, they don’t get the length on the kick that they normally do. I knew that if he out-kicked this coverage it was set up for it.”

The Hurricanes totaled 15 tackles for loss, including three each by defensive linemen – Demetrius Jackson and Courtel Jenkins.