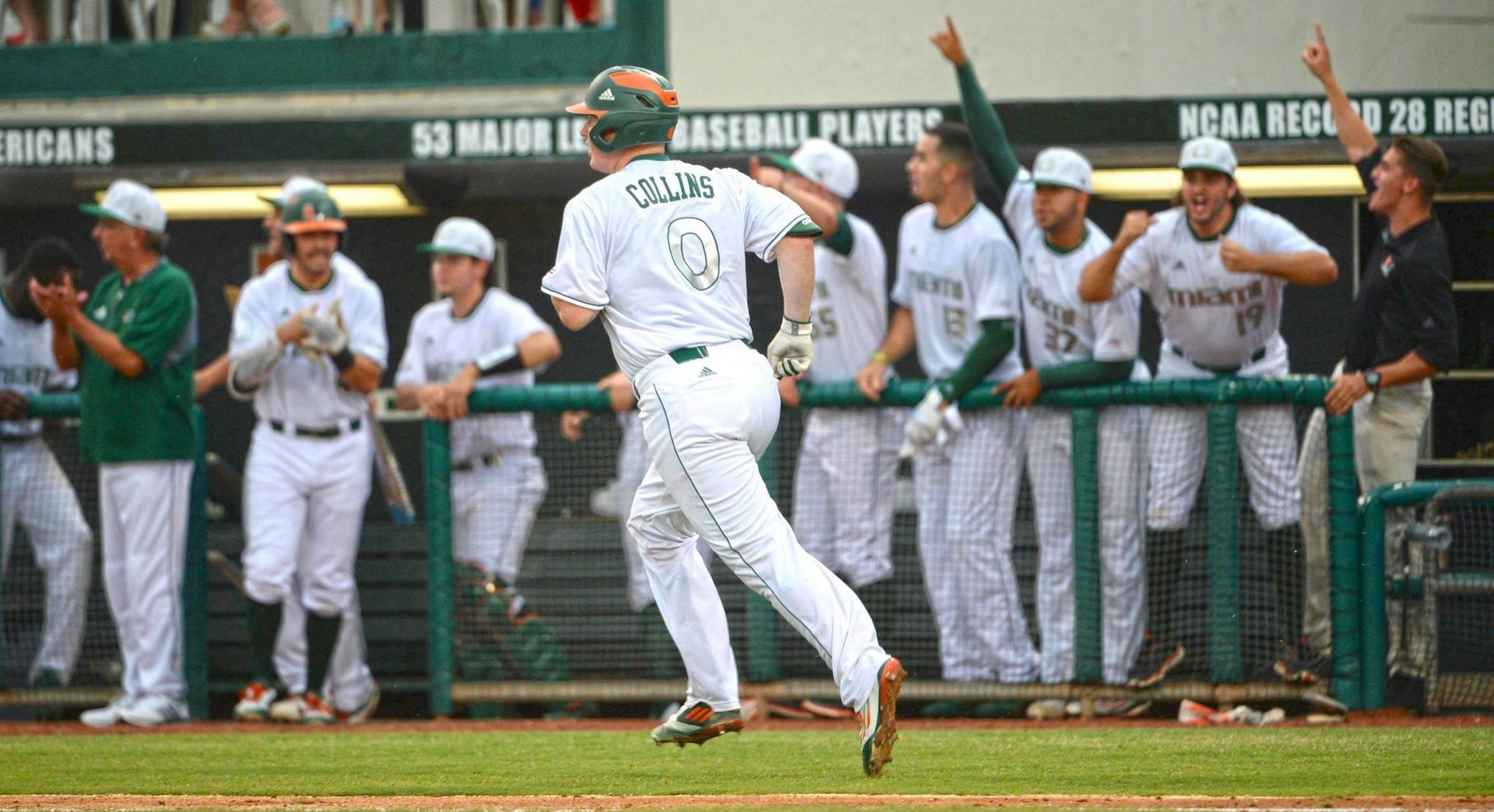 CORAL GABLES, Fla. — Squaring off against one of the nation’s top pitchers in Boston College’s Justin Dunn, it was Miami lefthander Michael Mediavilla who shined brightest Friday night in the opener of the NCAA Coral Gables Super Regional.

Mediavilla, a third-team All-ACC selection in his first year as a member of the weekend rotation, went a career-long 7.2 innings and allowed just three runs (two earned) in another impressive outing, leading Miami to a 12-7 win at Mark Light Field.

He reached the six-inning mark for the sixth straight start, striking out seven batters, surrendering just four hits and walking three  over 123 pitches – the most thrown by any Hurricane pitcher in a start all season.

With the victory, Mediavilla became Miami’s first 11-game winner on the hill since Chris Hernandez in 2008.

And with a victory Saturday afternoon (12 p.m.) against the Eagles, Miami will make its second straight trip to the College World Series.

The Eagles staged a four-run rally in the ninth inning that included a three-run home run by pinch hitter Scott Braren, but junior closer Bryan Garcia entered with the bases loaded in the ninth and struck out Donovan Casey to end the game.

“It was a big win for us, needless to say,” head coach Jim Morris said. “Boston College battled back, they have a good club. Give them credit for battling until the end.”

Facing Dunn, who was selected by the New York Mets in the first round of the MLB Draft Thursday night, Miami’s offense proved itself up to the challenge.

Trailing 1-0 after an RBI groundout by BC’s Nick Sciortino in the first, the Hurricanes put together a four-run third to take their first lead of the game. Back-to-back, one-out singles from sophomore Christopher Barr and junior Randy Batista set the stage for junior Zack Collins to deliver what proved to be the game-winning hit.

In a matchup of MLB first-round draft picks, Collins – who was selected 10th overall by the Chicago White Sox Thursday – won Round 2, crushing the first pitch he saw from Dunn over the fence in right for a three-run home run.

“I’m patient, but if they throw a first pitch fastball there, I usually swing,” Collins said. “With a man in scoring position, I’m going to be aggressive.”

The homer was the 40th career blast for Collins, who became just the eighth Hurricane in history to reach the milestone.

Miami (49-11) wasn’t done there. After a popout from senior Brandon Lopez, junior Johnny Ruiz belted the first of his two home runs on the night, a solo shot to right-center to push Miami’s lead to 4-1.

Dunn (4-2), who was tagged for a season-high five runs, had allowed just one home run all season entering Friday night’s game.

The Eagles (34-21) responded with two runs in the top of the fourth, highlighted by an RBI double from shortstop Jonny Adams, to trim the deficit to 4-3.

Miami chased Dunn with one out in the sixth. Junior Willie Abreu, who doubled to open the inning, took third on a groundout by Jacob Heyward, prompting a pitching change. But Eagles lefthander Dan Metzdorf walked Barr on four pitches, and redshirt junior Edgar Michelangeli followed with a two-run double to put Miami back up three at 6-3.

Mediavilla (11-1), at 95 pitches after six innings, came back out for the seventh and retired the side on 13 pitches, departing to a standing ovation from the 2,762 fans in attendance. But that wasn’t his final act.

The laidback lefty, 108 pitches deep into the outing, returned for the eighth and recorded the first two outs of the inning before allowing a two-out double flared to right-center. He was greeted by another round of applause before freshman Frankie Bartow entered and retired Sciortino to avoid any damage.

“I just wanted to go out there and battle for my team,” Mediavilla said. “They’ve always been putting up runs for me. They’ve always had my back even in the moments [when I] was a little shaky in the beginning.”

The Hurricanes piled on with a five-run eighth that included the first career grand slam for Ruiz. With the bases loaded on two hit batsman sandwiched around a walk, Ruiz belted a full-count offering from BC reliever Jack Nelson over the fence in right to push Miami’s lead to 12-3. The grand slam was the third by a Hurricane this season.

“It’s awesome, but we can’t look too far ahead,” Abreu said. “We just got to worry about tomorrow and worry about doing what we usually do on the field and staying within ourselves. [As long as] we take it at-bat by at-bat and, obviously, inning by inning, [then] we’re going to be okay.”

Miami returns to The Light Saturday for Game 2 of its best-of-three Super Regional with Boston College. First pitch for the contest, slated for broadcast on ESPNU and 560 WQAM, is set for 12 p.m.