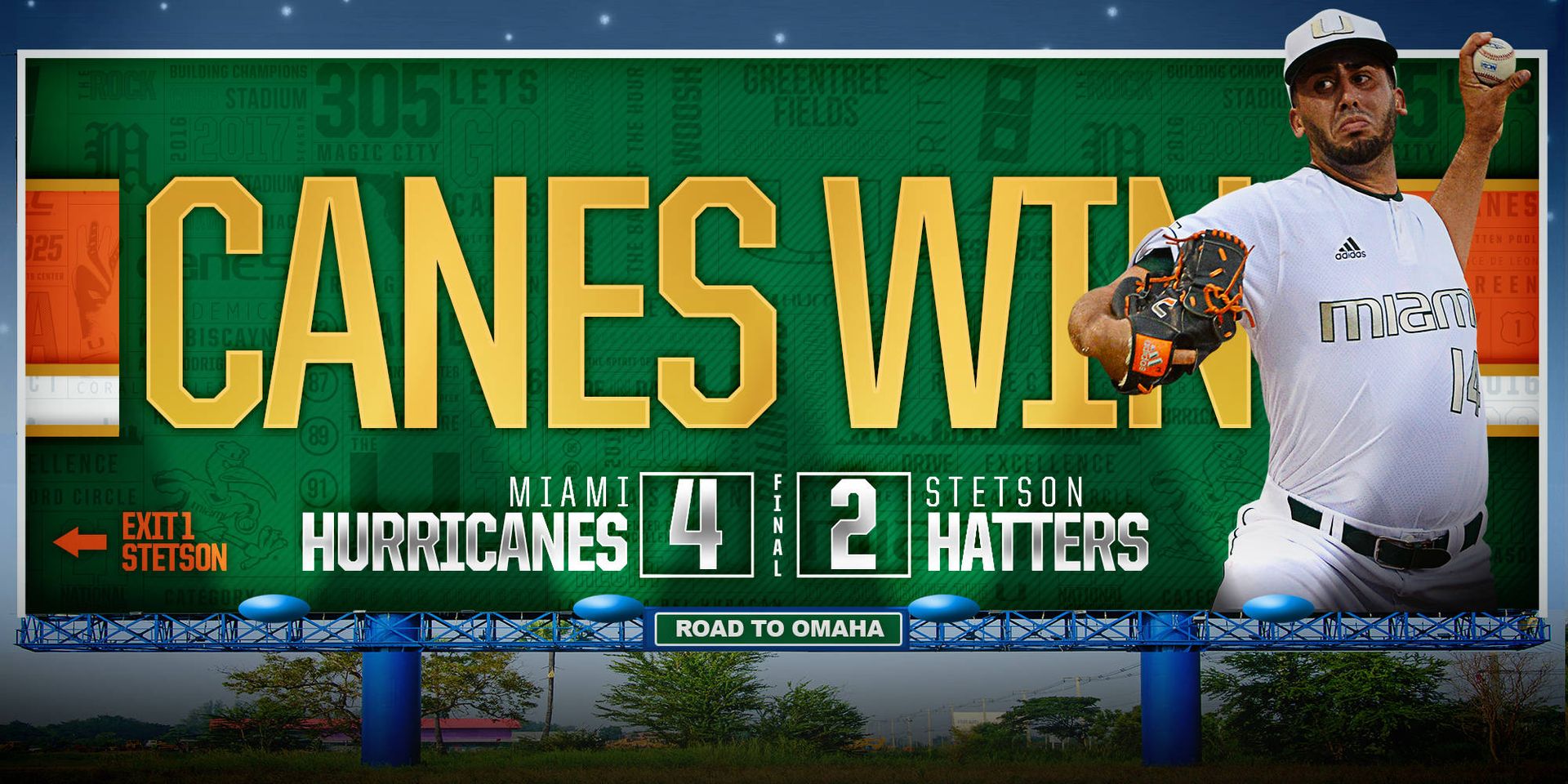 With the score tied late, top-seeded Miami rallied for two runs in the bottom of the eighth to take a 4-2 win over No. 4 seed Stetson in Game 2 of the NCAA Coral Gables Regional at Alex Rodriguez Park at Mark Light Field Friday night.

With the victory, Miami advanced to a winner’s bracket showdown with No. 3 seed Long Beach State to be played Saturday at 7 p.m. The Hatters will play No. 2 seed FAU in an elimination game at 1 p.m. Saturday.

“Anybody could do it in the lineup. No matter what, when we are tied or down going into the last innings, we know something is going to happen where we are going to come back or win the game. It’s Mark Light magic.”

After Stetson (29-30) tied the game 2-2 on an RBI single in the top of the eighth, a wild pitch from Hatters closer Walker Sheller with the bases loaded in the home half of the inning scored junior Randy Batista to put Miami back ahead 3-2.

Batista said scoring the go-ahead run was a “great feeling.”

“We don’t worry about it. One through nine, anybody can make it happen,” Batista said. “We just want to put ourselves in a position to win all the time.”

On a potential double play ball two batters later, a throw from short pulled first baseman Will Mackenzie off the bag to plate Collins for an insurance run for Miami.

“Anybody could do it in the lineup,” Collins said. “No matter what, when we are tied or down going into the last innings, we know something is going to happen where we are going to come back or win the game.”

Junior Bryan Garcia then entered in the ninth and secured his 16th save of the season and 41st of his career in front of a boisterous crowd of 2,893 fans.

A week after a disappointing start at the ACC Championship in Durham, N.C., junior lefthander Danny Garcia was masterful in a career long-tying 7.2 innings against the Hatters.

“Both Garcias pitched very well,” head coach Jim Morris said. “Danny, of course, had his longest outing and Bryan got the save and pitched extremely well. Big win for us. A lot of competition there and our guys played hard and, luckily, we got a W.”

Despite the performance, Garcia wound up with a no-decision after Stetson catcher Austin Hale tied the game in the eighth with a run-scoring single off Miami reliever Frankie Bartow.

“That’s the life of a closer or set-up guy,” Morris said. “You can go out there with the game on the line and be on top of the world or on the bottom. I am sure Frankie [Bartow] doesn’t feel good about his outing. He threw really well, except for one pitch.”

After Jack Machonis opened the scoring for Stetson with an RBI single in the second, Garcia retired 18 of the next 21 batters to end his outing. He struck out four batters and walked two, surrendering just four hits over 116 pitches in one of the most dominant starts of his career.

“I just started pounding the strike zone and making my defense work for me,” Garcia said. “They did an incredible job behind me and I appreciate that. I was just trying to get people out as quick as I can to let our offense bat.”

Unfortunately for Miami, Stetson ace Mitchell Jordan was up to the task set by Garcia. The righthander tossed seven innings of his own, scattering four hits and four walks before giving way to the Hatters bullpen in the eighth.

“He went out and really battled and pitched outstanding against us,” Morris said of Jordan. “We hit very few balls hard off of him and they did a good job defensively, too.”

Trailing 1-0 in the third, Miami tied the game on an RBI single from junior designated hitter Randy Batista. Batting second in the lineup for the first time all season, Batista blooped a hit to shallow centerfield to score sophomore Carl Chester, who reached with a two-out double.

Chester reached base for the 20th straight game with the extra-base hit, while Batista reached base three times on the single and two walks.

The Hurricanes (46-11) took the lead an inning later thanks to the hustle of junior Jacob Heyward. With runners on first and third after a walk and single, Heyward grounded a pitch from Jordan towards Hatters shortstop Colton Lightner that looked like a potential double play ball. Heyward beat the throw to first, however, allowing senior Brandon Lopez to score, giving Miami a 2-1 lead.

Junior Willie Abreu extended his hitting streak to a season-long seven games earlier in the inning.

The Hurricanes next play the Dirtbags, who topped the Owls, 5-1, in Game 1 of the Coral Gables Regional Friday afternoon. First pitch for Saturday’s game, slated for broadcast on ESPN3 and 560 WQAM, is set for 7 p.m.