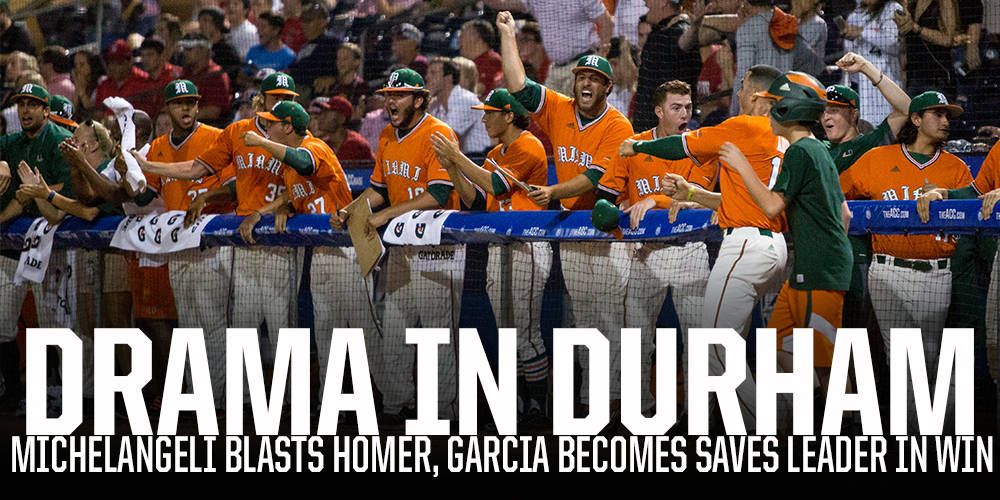 This time, the winning heroics belonged to a Hurricane.

Number-nine hitter Edgar Michelangeli’s three-run homer off reliever Tommy DeJuneas in the top of the ninth inning lifted top-seeded Miami to a dramatic 8-7 win over the fifth-seeded Wolfpack before a lively crowd of 5,692.

Michelangeli’s clutch delivery followed a two-run homer by NC State’s Chance Shepard in the bottom of the eighth that snapped a 5-5 tie and appeared to have the Wolfpack on the verge of victory.

“First of all, I think it was a great game. I think the fans enjoyed it. It was a little wild there,” head coach Jim Morris said.

Miami closer Bryan Garcia yielded two singles in the bottom of the ninth but worked out of the jam for his 40th career save – tops in Miami history and three shy of the all-time ACC lead.

“I go out there and I give my all every time I pitch,” Garcia said. “Especially as a closer – every game usually means something, and that’s what I love. I love being involved in almost every game.”

The Hurricanes (45-10) avenged a 5-4, 12-inning loss to NC State in last season’s Championship and turned its attention to the remainder of this year’s event. Miami has Friday off before returning to action on Saturday at 3 p.m. against fourth-seeded Florida State (36-19). The winner of that contest will clinch Pool A of the round-robin tournament and will advance to Sunday’s noon championship game opposite the Pool B winner.

Thursday’s night’s game followed a strange and unpredictable pattern almost from the outset.

NC State starter Sean Adler did not allow a hit through 2.1 innings but was lifted with one out in the top of the third inning after issuing his sixth walk of the game. The Hurricanes’ Brandon Lopez greeted reliever Evan Brabrand with a long home run for a 2-0 Miami lead.

Adler, a redshirt junior who entered the game with a 7.08 ERA, made his first start in 18 appearances this season, the second start of his collegiate career and the first since his true freshman year at Southern Cal in 2013. But neither he nor Brabrand figured in the final decision, as the crazy ebb and flow of the game was just beginning.

The Wolfpack sent 10 men to the plate and collected seven hits in a five-run fourth inning to go in front 5-2. A leadoff double by Preston Palmeiro started the flurry, followed by Joe Dunand’s single and well-placed bunts by Brock Deatherage and Andrew Knizner. An RBI single by Brett Kinneman and Shepard’s two-run double provided exclamation points.

“The fourth inning was crazy for us defensively,” Morris said. “I think everything that could go wrong in the fourth went wrong, and I look at the board, there’s still no errors…a lot of crazy things happened in that inning. But to our credit, our guys fought back.”

Miami scrapped back, finally tying the game at 5-5 in the top of the eighth inning when Christopher Barr squeezed Michelangeli home from third on a bunt single.

A leadoff single by Knizner in the bottom of the eighth set the table for Shepard, who blasted his 12th home run of the year over the fence in left-center to send the predominantly pro-State crowd into jubilation.

But Miami immediately launched its counterattack against DeJuneas (2-3).  Randy Batista drew a one-out walk and Jacob Heyward beat out an infield hit before Michelangeli sent his third home run of the season over the left field wall in the stunning turn over events. The Wolfpack entered the game with a 31-1 record when leading after eight innings.

Frankie Bartow (4-0) picked up the win on the mound for Miami despite giving up Shepard’s two-run homer in the eighth. The teams used a combined 11 pitchers.

The Wolfpack outhit the Hurricanes 14-11, Dunand collecting three hits and Shepard finishing with four RBIs. Miami’s Lopez finished with a 3-for-3 night at the plate.