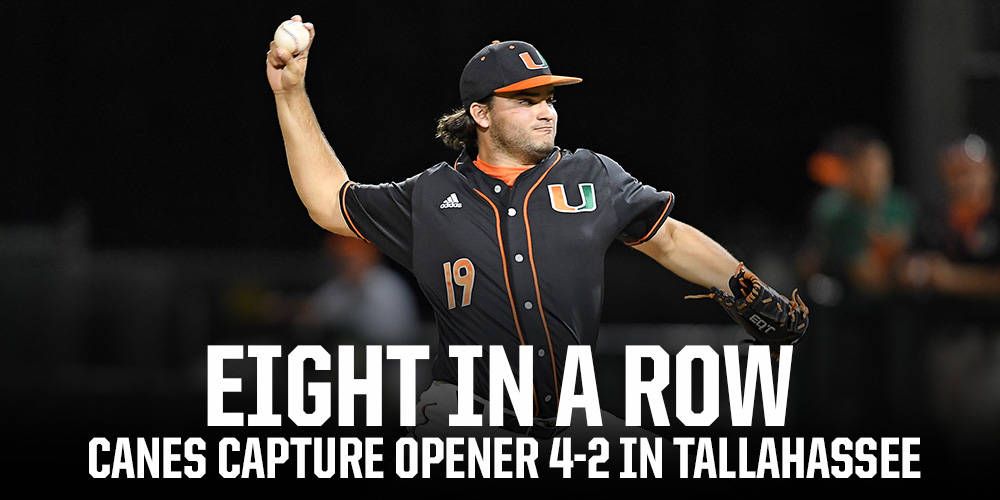 Trailing for most of the game, the Hurricanes took the lead in the seventh inning, added an insurance run in the eighth, and held on in front of 4,156 fans.

In a game marred by two separate weather delays, junior Bryan Garcia entered in the ninth and locked down his ACC-leading 13th save of the season, moving him into sole possession of second place in Miami history with 38.

The Hurricanes (42-9, 20-6 ACC) struggled to string any offense together until the seventh, when they took their first lead of the ballgame after playing behind since the second.

“There was good pitching both ways,” head coach Jim Morris said. “There wasn’t a lot of hitting. It was more pitching and defense, and taking advantage of a couple of mistakes here and there.”

With two runners in scoring position and one out, Florida State relief pitcher Jim Voyles elected to intentionally walk Miami junior Willie Abreu to set up a forceout at any base. Junior designated hitter Randy Batista made him pay for the decision, cracking a go-ahead double to left-center to score two runs and put Miami up 3-2.

The hit from Batista was just the second for the Hurricanes since a leadoff single by junior Carl Chester to open the game. Miami had just one hit the rest of the way, and was outhit by Florida State 6-4 on the night.

Freshman Frankie Bartow added to the drama in a two-on, one-out situation in the bottom half of the seventh, but induced a double play from cleanup hitter Cal Raleigh to end the scoring threat.

He worked magic once again in the eighth to keep the Hurricanes ahead.

With a runner on third and one out, Florida State outfielder Steven Wells, Jr., attempted to tie the game on a squeeze play. Bartow had the play read perfectly, however, and charged forward, handled the bunt and tossed to Collins, who received the throw barehanded for a tagout at home.

Senior Brandon Lopez added another web gem in the frame, ranging to his left deep into the hole and flipping to junior Johnny Ruiz for a forceout.

Abreu added insurance for Miami on an RBI triple off the wall in right in the top of the ninth inning.

Florida State (33-18, 15-9 ACC) took advantage of some mound miscues for a 2-0 lead in the second inning. Making only the second start of his career, Miami freshman righthander Andrew Cabezas hit two batters in the inning and issued a bases-loaded walk to Seminoles second baseman Matt Henderson to help the hosts’ cause.

The second lightning warning of the night delayed the game in the third inning by 48 minutes. The initial lightning delay pushed the game back from its initial start time of 6 p.m. to a 7:02 p.m. first pitch.

Cabezas settled down after the second round of inclement weather, allowing just three baserunners from the third through fifth innings.

Facing an early hole, Miami halved the deficit in the fifth. After Lopez was hit by a pitch from Florida State righthander Drew Carlton to open the inning, Ruiz laced a standup triple to the wall in right for Miami’s first run.

Lopez reached base for the 35th straight game when he was plunked on the 0-1 offering from Carlton.

The Seminoles righthander stranded Ruiz by retiring the next three Hurricanes batters, holding the Florida State lead at 2-1.

Cabezas hit Florida State’s John Sansone with a pitch to open the fifth, but struck out Jackson Lueck and induced a flyout from Raleigh for the first two outs of the inning. He was relieved by redshirt freshman Devin Meyer in the fifth.

Cabezas struck out three batters, walked three and allowed three hits in 4.2 innings. He threw a career-high 99 pitches in another effective outing, which matched a career-long set last week against Pittsburgh.

Meyer (1-0) found himself in a jam in the sixth, but got help from his defense to hold the deficit at one run. With Dylan Busby at second after a double and Wells Jr., on first after a walk, Ruiz ranged to his left to rob Henderson of a hit for the final out of the inning.

Voyles (6-1) was charged with the loss after surrendering the lead in the seventh.

The series marks the first time the two rivals have played each other to end the regular season since 1976.

“I don’t even think we think about that,” Abreu said. “I just know that whenever we’re playing each other, we always know it’s going to be a good one. It’s a rivalry – it doesn’t matter when we play.”

The two teams return to Dick Howser Stadium Friday for game two of the rivalry series. First pitch for the contest, slated for broadcast on ESPN and WVUM 90.5 FM, is set for 6 p.m.