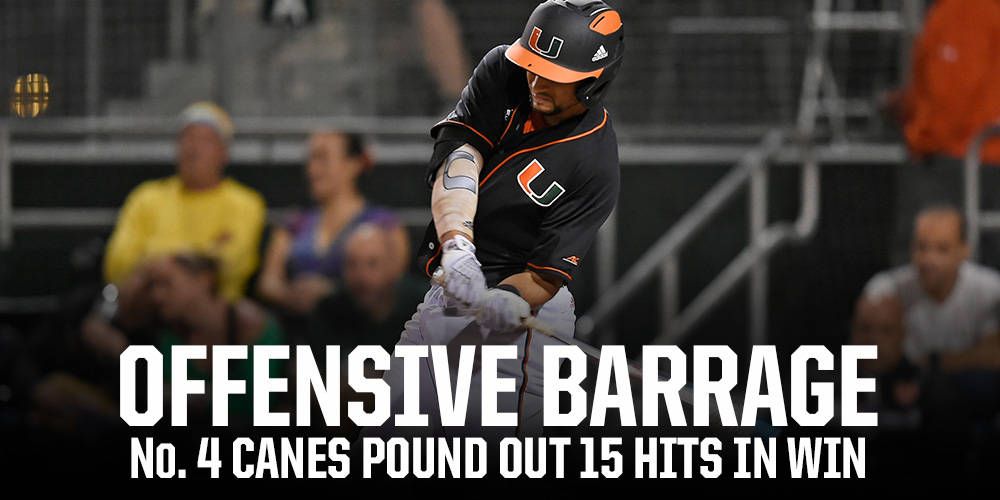 CORAL GABLES, Fla. – No. 4 Miami continued its winning ways Tuesday night at Alex Rodriguez Park at Mark Light Field, picking up a 14-7 win over Bethune-Cookman in the team’s fourth game in as many days.

The Hurricanes (37-9), who recorded double-digit runs for the sixth time in their last eight contests, built on their recent run of momentum at the plate in front of 2,356.

A night after recording season-high totals in runs and hits on the road at Georgia Tech, Miami had nine different players record at least one hit in a 15-hit barrage.

The Hurricanes have now scored 43 runs in their last three games.

Junior Zack Collins opened the scoring with a solo home run in the first inning, and Miami chased Bethune-Cookman starter German Hernandez in the next inning with four more runs to take a 5-0 lead.

Sophomore Carl Chester and redshirt junior Christopher Barr recorded back-to-back RBI singles, and after a Wildcat pitching change, Collins drew a bases-loaded walk for the third run of the inning.

Senior Brandon Lopez then connected on an RBI single to left to cap Miami’s scoring. With the basehit, Lopez reached base for the 30th straight game and extended his hitting streak to 10 straight games.

Hernandez (4-5) was charged with the loss after allowing five runs on six hits, one walk and one hit batter.

Sophomore Jesse Lepore improved his perfect personal record to 7-0. He tossed five innings and allowed seven hits and three runs (all unearned) before being relieved after 101 pitches.

Junior Randy Batista pushed Miami’s lead to 7-1 with a two-RBI single in the fourth.

The Hurricanes blew the game open with a five-run seventh that included bases-loaded walks from Batista and junior Jacob Heyward. Freshman Romy Gonzalez, making his second straight start at third base, added a two-RBI single in the frame.

Gonzalez finished 3-for-4 and was one of five Hurricanes to record multiple hits.

The Hurricanes return to Alex Rodriguez Park at Mark Light Field on Friday for their series opener with Pittsburgh. First pitch for the matchup, slated for broadcast on ESPN3, is set for 7 p.m.