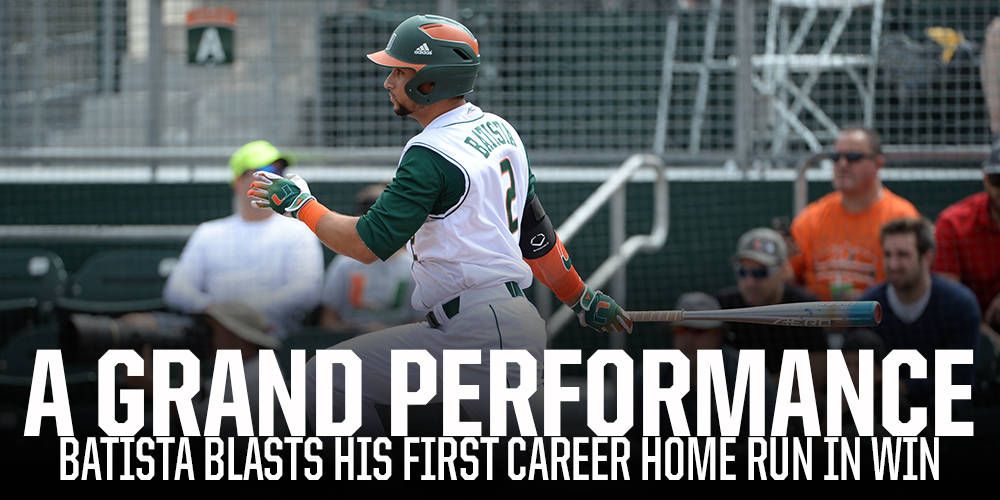 CORAL GABLES, Fla. – Fourth-ranked Miami completed its sixth sweep of the season Sunday at Mark Light Field with a 12-7 win over Florida A&M in the series finale.

The Hurricanes (33-8) fell behind early, took the lead in the third inning and received late insurance on a seventh-inning grand slam from Randy Batista in front of 2,931.

Batista, who had a career-best four hits (4-for-5) to lead Miami’s offense, became the first Hurricane since Frank Fleizach in 1998 to have the first homer of his career result in a grand slam.

“I was just trying to get good pitches to hit,” Batista said. “On that grand slam, the ball just happened to run in and I got it to go out. It was huge for the team.”

The Hurricanes pounded out 17 hits to bring their weekend total to 46 against the Rattlers, who were swept for the first time this season.

A five-run third inning put the hosts ahead for good.

Trailing 2-0, Miami sent nine batters to the plate in the decisive frame. Joe Gomez, making his second straight start at catcher, doubled to open the inning and scored on a Carl Chester RBI single.

Johnny Ruiz added an RBI single, Jacob Heyward connected on an RBI fielder’s choice groundout and Willie Abreu capped the inning’s scoring with a two-RBI double to left to put Miami ahead 5-2.

The Rattlers (24-17) threatened in the sixth when they loaded the bases on three singles and chased Garcia. With Miami’s lead down to 5-3, righthander Frankie Bartow entered in a precarious situation but struck out Florida A&M designated Willis McDaniel to escape the jam.

Paced by the Batista slam, the Hurricanes exploded for seven runs in the seventh inning to put the game away. Heyward opened the scoring with a perfectly executed squeeze play that scored Lopez, who reached via error to open the inning.

But the big hit came from Batista, whose deep flyball to right on an 0-1 pitch from Rattlers reliever Kendal Weeks cleared the fence.

“I knew I hit it hard,” Batista said of the grand slam. “I knew something was going to happen. I was just hoping for it not to hit the wall, but in the end, someone was going to score, so it was all good.”

Ruiz, who raised his average to .347 with a 3-for-5 day at the plate, plated two more Miami runs with a bases-loaded single up the middle. Ruiz’ 41 RBI are second only to 42 from All-American catcher Zack Collins, who missed his second consecutive game due to illness.

The Rattlers cut into Miami’s lead when they tagged the Hurricanes bullpen for four runs in the eighth inning. But junior closer Bryan Garcia entered with runners on the corners and recorded the game’s final four outs to seal the victory.

Chester (2-for-4, two runs), Lopez (2-for-3, two runs) and Abreu (2-for-4, two RBI) also recorded multi-hit performances for Miami. The sweep was fifth for the Hurricanes at home, where they have compiled an impressive 26-6 record.

“It’s huge for us,” Batista said of the team protecting its home field. “We have to keep it going, winning at home every time. The sweep was big.”

Miami caps an eight-game homestand Wednesday with a midweek matchup against FAU. First pitch for the contest, slated for broadcast on ESPN3 and 560 WQAM, is set for 7 p.m.