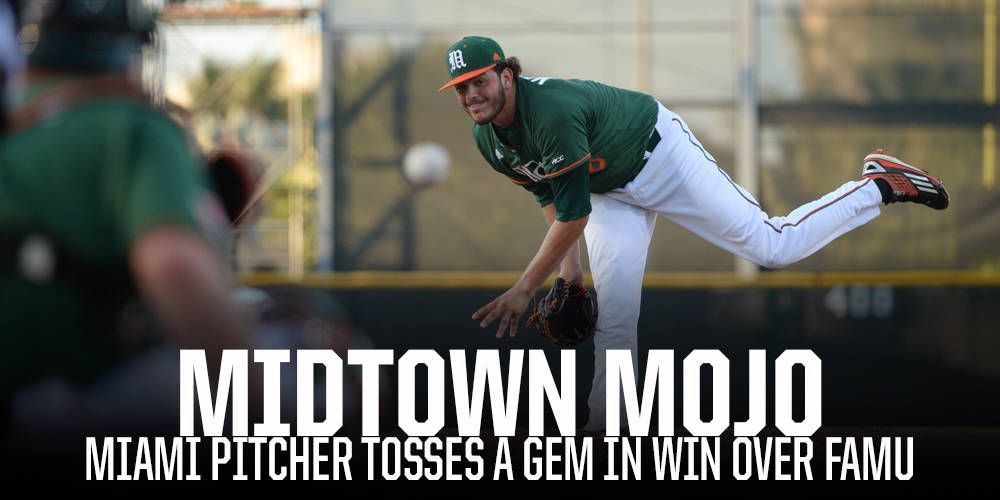 Mediavilla Leads No. 4 Miami to Series-Clincher

Mediavilla (8-1), who dealt six shutout innings last time out vs. Virginia, delivered another dominant start against the Rattlers. The lefthander allowed just three hits – all singles – and two walks before being removed after five innings with his team comfortably ahead.

Mediavilla struck out four batters and needed just 73 pitches to get through the outing.

“I felt good. I had more command of my off-speed [pitches] today,” Mediavilla said. “Those were my go-to pitches to get ahead of batters.”

The laidback lefty said he recognized something from Florida A&M (24-16) batters early in the game that lead to another successful outing.

“I was throwing my fastball off of my off-speed because I noticed that their hitters were gearing up for my fastball,” Mediavilla explained. “They were swinging a little early, sort of out of their shoes.”

The Hurricanes (32-8) plated two runs in the first inning, two more in the fourth, and scored seven runs in the fifth to put the game out of reach in front of 3,420.

“It takes a lot of pressure off of me, especially when you have the defense we have this year, which is one of the best in the country and the best in the ACC,” Mediavilla said.

An RBI single from red-hot Brandon Lopez scored Carl Chester, who walked and stole second, for Miami’s opening run, and a sacrifice fly from Ruiz would plate Lopez to double Miami’s lead.

Lopez, one of four Hurricanes with multi-hit performances, recorded his second straight three-hit game (3-for-3) to raise his average to .402.

Another sacrifice fly from Edgar Michelangeli made it 3-0 in the fourth, and Willie Abreu connected on an RBI single off up the middle off Rattlers lefthander Jojo Durden to push the lead to 4-0.

Miami blew the game open in a lengthy fifth inning, where they sent 12 batters to the plate and recorded eight of their 14 hits.

Chester connected on two basehits in the fifth– one off Durden (1-1) and one off reliever Kenny McDonald. The Rattlers used seven pitchers on the night, including Durden, who was tagged for a season-high eight runs on eight hits.

Redshirt freshman Devin Meyer needed 22 pitches to get through two scoreless innings of relief.  The Rattlers plated single runs in the eighth and ninth off Miami relievers Ryan Guerra and Daniel Epstein to break the Hurricanes’ late shutout bid.

With the win, Mediavilla improved to 7-0 at home and lowered his home ERA to an eye-popping 1.55.

“I was born here, my family is here….representing my city and having ‘Miami’ across my chest is the best thing that’s ever happened to me,” Mediavilla said. “It’s everything I ever wanted.”

Miami will go for its fifth true sweep of the season Sunday in the series finale. First pitch for the contest, slated for broadcast on ESPN3 and 560 WQAM, is set for 1 p.m.