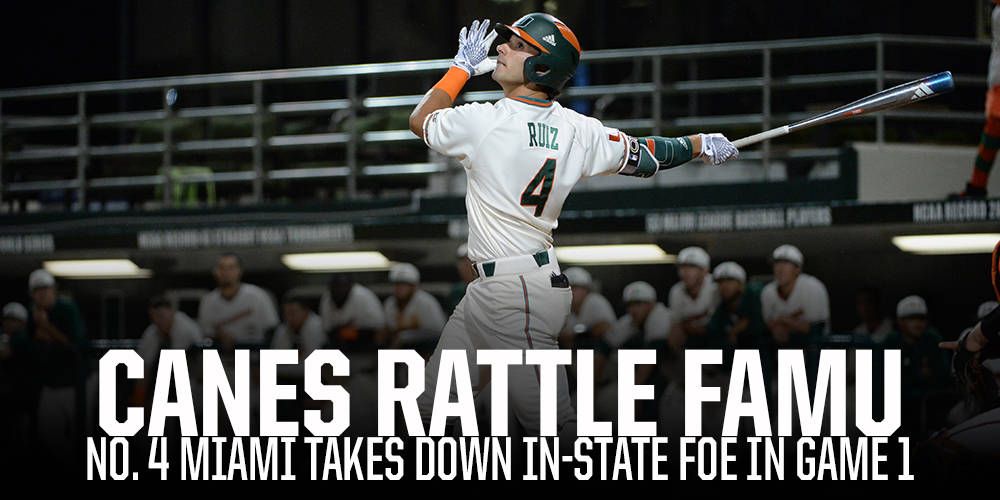 In the first matchup between the two teams since 1981, the Rattlers (25-14) opened the scoring on a two-run home run by Ben Ellzey in the second inning and lead 3-1 in the top of the fourth.

Senior lefthander Thomas Woodrey recovered from a tough beginning to his outing, throwing 109 pitches over a quality start.

“My problem in those middle innings is I wasn’t getting ahead, I wasn’t throwing as many strikes,” Woodrey said. “In those later innings, I was able to settle down, hit my spots and work ahead.”

Woodrey struck out six Rattlers – the most since recording 10 punchouts against Manhattan on March 4 – and allowed just two hits and no runs after the third.

“FAMU is a great club,” Woodrey said. “They’re a team that wins their conference a lot, they make it into the NCAA Tournament. It’s definitely a postseason-type of ball team.”

Trailing 3-1 in the fourth, Miami’s offense was jumpstarted when Brandon Lopez reached on a wild pitch from Rattlers lefthander Ricky Page on a third strike in the dirt.

Back-to-back walks from Page (3-3) to Johnny Ruiz and Jacob Heyward loaded the bases, and the second wild pitch of the inning scored Lopez to cut the deficit to 3-2.

An RBI groundout from Edgar Michelangeli tied the game 3-3, and a sliced RBI double to left by junior Willie Abreu put Miami ahead for the first time.

The Hurricanes scored three more runs in the fifth, with the key hit coming on a two-out triple from Ruiz to dead center. Heyward added an RBI single to push Miami’s lead to 7-3.

The six runs allowed by Page tied a career high.

The FAMU lefthander, who was originally slated to start Saturday before a late switch in rotation, allowed six hits on the night. He struck out four and walked two in 4.2 innings.

Woodrey (5-3), who won for the third time in his last four starts, struck out two batters in his final inning of work.

“You have to go out there, and every game has to be the same mentally. It doesn’t matter who you’re pitching against,” Woodrey said.

Sophomore Carl Chester, who hit five home runs as a freshman in 2015, connected on his first blast of the season in the sixth. With Abreu on first after a sky-high single fell in the shallow infield on a miscommunication, Chester cracked a 1-2 pitch from Rattlers reliever Ryan Anderson over the fence in left to put Miami up 9-3.

Lopez added his first home run of the season and second of his career in a three-run eighth for Miami.

Redshirt freshman Keven Pimentel, who entered in relief of Woodrey to open the seventh, pitched the final three innings to earn the first save of his career. He allowed five hits and one walk with one strikeout.

The two teams return to Mark Light Field Saturday for game two of their series. First pitch for the contest, slated for broadcast on ESPN3 and 560 WQAM, is set for 7 p.m.