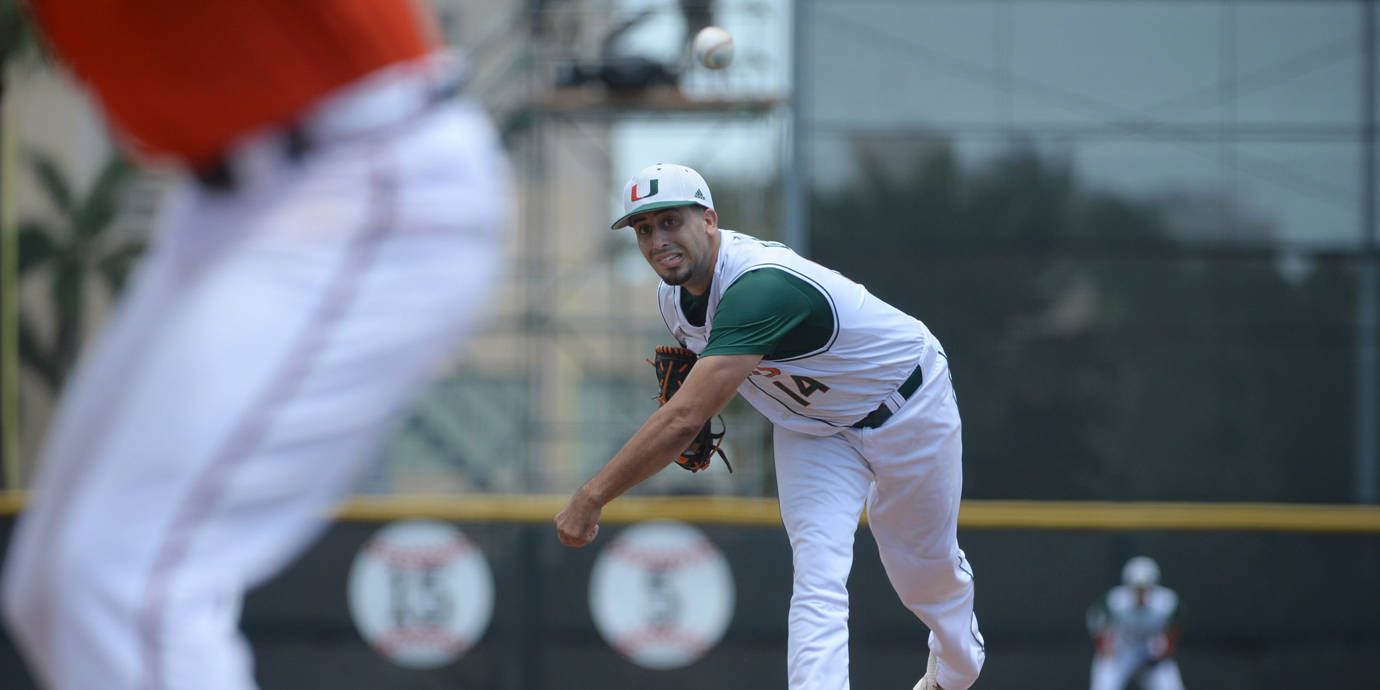 CORAL GABLES, Fla. – For the first time in nearly two months and for just the second time this season, top-ranked Miami dropped a weekend series.

The Hurricanes fell to Virginia 7-3 in Sunday’s rubber match at Alex Rodriguez Park at Mark Light Field, and dropped two of three in a series for the first time since a weekend set with then-No. 1 Florida Feb. 26-28.

“We didn’t play well, really – offensively or defensively and mentally in this game, as far as getting it done,” head coach Jim Morris said. “When that happens, you’re not going to win against good teams. And [Virginia] is a good team.”

The Hurricanes made two base-running miscues that halted late rallies, and were out-hit by the Cavaliers 11-8. A ninth-inning fielding error by Miami helped swell Virginia’s late lead to a comfortable four-run advantage.

Miami did not get its first hit until Zack Collins cracked a 2-2 pitch from Virginia starter Alec Bettinger over the fence in left-center for a two-run home run in the fourth, cutting into a 3-0 Virginia lead.

“They’re a good team, we just made too many mistakes,” Collins said. “Offensively, defensively, pitching – we just didn’t play our best.”

The Cavaliers struck for the game’s opening run in the second inning and added two more in the fourth for a 3-0 advantage.

The hosts got two runs back on the home run from Collins, who raised his average to a team-best .425 with a three-hit performance (3-for-4).

With Christopher Barr on first base after a leadoff walk, Collins took Bettinger (1-4) deep over the glove of a leaping Charlie Cody in left for his team-leading ninth home run of the season.

The hit extended Collins’ streak of reaching base to 33 straight games.

The Hurricanes threatened to tie the game when Brandon Lopez followed Colllins’ blast with a single and Jacob Heyward drew a walk, which included a wild pitch by Bettinger in the dirt, to put runners on the corners. But the righthander induced a double play to end the inning and keep Virginia ahead 3-2.

Miami (30-8, 14-5 ACC) tied the game in the sixth. Barr and Collins recorded back-to-back singles to set up the scoring opportunity, and a sacrifice bunt from Lopez moved both runners up one base.

Johnny Ruiz came through with an RBI groundout to the right side of the infield to knot the game 3-3.

Garcia (6-3) came out for the seventh, but he issued a leadoff walk to Nate Eikhoff before being relieved by freshman Andrew Cabezas. The junior allowed six hits and four runs with three walks across 94 pitches.

The Cavaliers went back ahead 5-3 on a two-RBI single from Matt Thaiss off Cabezas.

Bettinger was relieved by Tyler Shambora in the seventh, having thrown six innings. He allowed three runs on four hits and four walks with two strikeouts.

Miami put two runners on with back-to-back singles from Romy Gonzalez and Carl Chester in the seventh, but Virginia reliever Kevin Doherty entered in relief of Shambora struck out Barr to end the threat. Collins and Lopez had back-to-back singles an inning later, but Collins was picked off at second and Ruiz struck out to end any chance of a rally.

“I think we played hard,” Heyward said. “We’ve been playing great all season. It’s a long season, and sometimes things like this happen. We just have to stay mentally focused and not make the mistakes that can cost us a game like that.”

The Hurricanes return to Alex Rodriguez Park at Mark Light Field Friday for their series opener against visiting Florida A&M. First pitch for the contest, slated for broadcast on ESPN3, is set for 7 p.m.