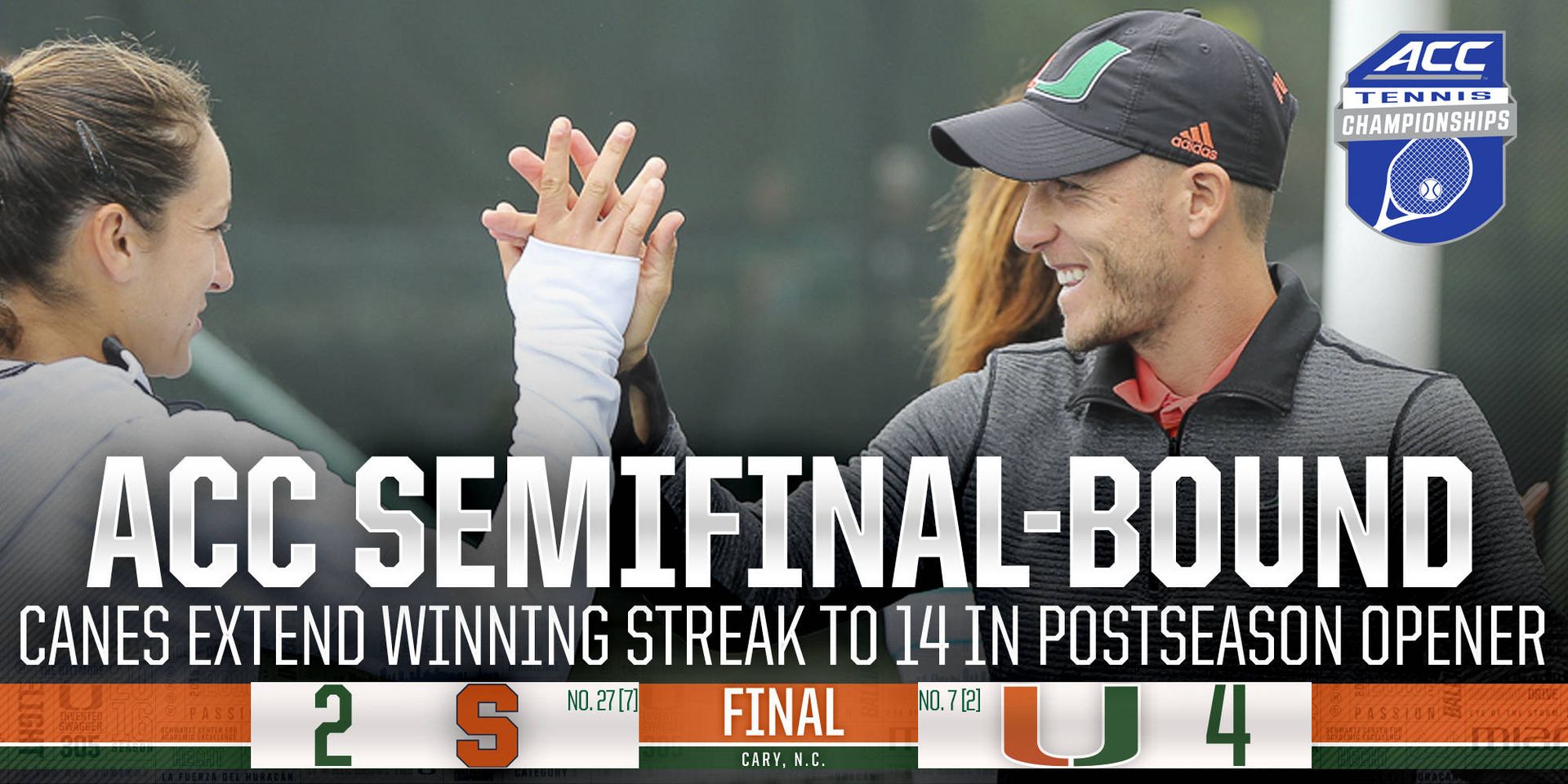 CARY, N.C. – After receiving a double bye into the quarterfinals, the University of Miami women’s tennis team picked up a 4-2 victory over Syracuse Friday morning to begin ACC Championship play.

The seventh-ranked and second-seeded Hurricanes stormed back after dropping the doubles point to the No. 27-ranked and seventh-seeded Orange at the Cary Tennis Park. Miami (18-7, 12-2 ACC) won four of five completed singles matches to stretch its winning streak to 14 in a row.

“I think we gained some confidence today from maybe not playing our best tennis match, but competing hard and staying calm and composed,” Miami head coach Paige Yaroshuk-Tews said. “We’ve kind of been preparing for that all season, that we’re going to find moments on a team that’s as young as we are where we’re not going to play our best tennis, but that we are athletic enough, smart enough and tough enough to figure it out and find a way if we stay calm. It’s exactly what they did today.”

The Hurricanes came up just short for the tightly-contested doubles point, the first time they had done so since March 16 versus second-ranked Ohio State, a match Miami also went on to win. Sophomore Sinead Lohan and freshman Clara Tanielian first fell to Dina Hegab and Anna Shkudun, 4-6.

The ninth-ranked pair of senior Stephanie Wagner and sophomore Wendy Zhang then dropped their first match since that March 16 contest against the Buckeyes, falling a touch shy, 6-7 (0-7), versus No. 33 Gabriela Knutson and Valeria Salazar.

The match between freshman Ana Madcur and Silvia Fuentes against the Syracuse (14-8, 7-7 ACC) duo of Nicole Mitchell and Maria Tritou was left unfinished with the score even at 5-5.

“I just think we got off to a little bit of a slow start in doubles and we can’t let that happen moving forward,” Yaroshuk-Tews said. “I think we figured it out and we turned the corner, it was just that time kind of ran out on us. So, going into singles we just needed to stay calm and understand that we were going to have our backs against the walls a little bit. They did a good job. I thought they did a good job in singles.”

Tanielian did not take long to win her singles match and even the score for the Hurricanes. She rolled to a 6-0, 6-1 victory against Libi Mesh in the first ACC Championship singles match of her career.

Miami took the lead for the first time, grabbing an advantage it would not relinquish, with a straight-set victory from Fuentes, as she topped Tritou, 6-4, 6-0.

Wagner then earned the 132nd victory of her career, passing Miami associate head coach Laura Vallverdu for sole possession of second place of the program’s all-time list and moving within one victory of the top spot. The sixth-ranked player in the nation, Wagner took down No. 62 Shkudun, 6-4, 6-2.

Eighth-ranked Lohan locked up the victory for the Hurricanes with a hard-fought 7-5, 7-6 (7-4) triumph over Salazar. The win put Miami in the ACC Championship semifinals for the third time in the past four years.

“We’re approaching this [tournament] as dual matches,” Yaroshuk-Tews said of being back in the semifinals. “We’re here to play a dual match and hopefully that takes us to three dual matches over the course of the weekend.”

Additionally, with 14 consecutive victories, Miami has now matched its longest winning streak of the past 11 years, a stretch that came from Feb. 11, 2012, through April 4, 2012. The last time the Hurricanes won greater than 14 matches in a row was in 2005 when they won 16 straight.