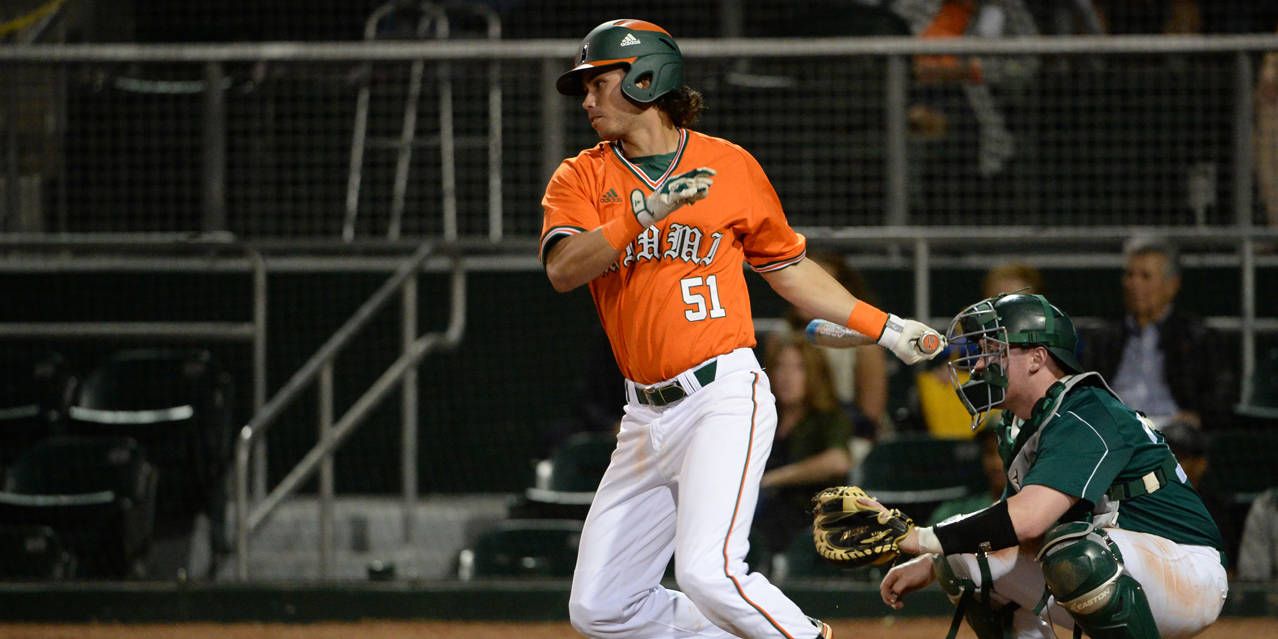 CORAL GABLES, Fla. – The top-ranked Miami Hurricanes could not come up with late magic Wednesday night, as they fell to No. 21 Florida Atlantic 4-3 in the opener of an eight-game homestand at Alex Rodriguez Park at Mark Light Field.

Trailing 4-2 in the eighth, the Hurricanes got a run back on two-out RBI single from senior Brandon Lopez to cut the late deficit to 4-3. But that was as close as Miami would get, as FAU closer Cameron Ragsdale entered in the ninth and earned his 11th save of the season.

The loss was just the fourth in the past 28 games for Miami.

“You have to be ready to play every night. FAU played better than us,” head coach Jim Morris said. “They deserved to win. They’re a team that’s ranked, they do a good job and they play the game well…they got some big hits when they needed them, and we didn’t. That was the difference in the game.”

FAU (27-8) took the lead in the first inning on a sacrifice fly by Christian Dicks off Miami righthander Jesse Lepore.

Miami (29-6) wasted little time in responding, however, as junior Zack Collins beat an infield shift and tied the game on an RBI single in the home half of the inning. Collins, who scored sophomore Carl Chester from second with his team-leading 40th RBI of the year, reached base for the 30th straight game with the single.

The Owls regained the lead on a solo home run to left by Stephen Kerr to open the third.

FAU starter David McKay settled down after the first inning to retire the next eight batters he faced into the fourth. Junior Willie Abreu would break the streak with a two-out walk, and stole second to give Miami a runner in scoring position.

On a wild pitch from McKay with Edgar Michelangeli at bat, Abreu tied the game with some heads-up baserunning. Realizing that Owls catcher Tyler Frank was unable to locate the ball, and running hard the whole way through, Abreu took a wide turn around third and scored to knot the game 2-2.

“We definitely had intensity in the beginning,” Lepore said. “[FAU] is a good club. We fought with them. Obviously we didn’t play to the best of our capabilities.”

“Jesse was doing a good job on the mound and keeping us close the whole game,” Abreu said.

The Owls tagged the Miami bullpen for two runs in the top half of the eighth inning to regain a late lead.

An RBI single from Sean Labsan off Frankie Bartow scored the first run, while an RBI groundout from Austin Langham made it 4-2. Freshman Andrew Cabezas (2-1), who pitched a scoreless seventh inning, was charged with both runs after allowing the first two batters of the eighth to reach.

Alex House (1-1) pitched one scoreless inning of relief to earn the win.

The first two batters of the eighth reached on a walk from Chester and a pitch that hit Johnny Ruiz. Lopez RBI single cut FAU’s lead to 4-3, but Colyn O’Connell retired Abreu on a flyout to the warning track in left.

“We just weren’t able to get that big hit…it just didn’t go our way,” Abreu said. “That’s baseball, that’s how it is. We have to come out next game and do it again.”

The Hurricanes return to Alex Rodriguez Park at Mark Light Field Friday for their series opener with Virginia. First pitch for the contest, set for broadcast on ESPN3, is set for 7 p.m.