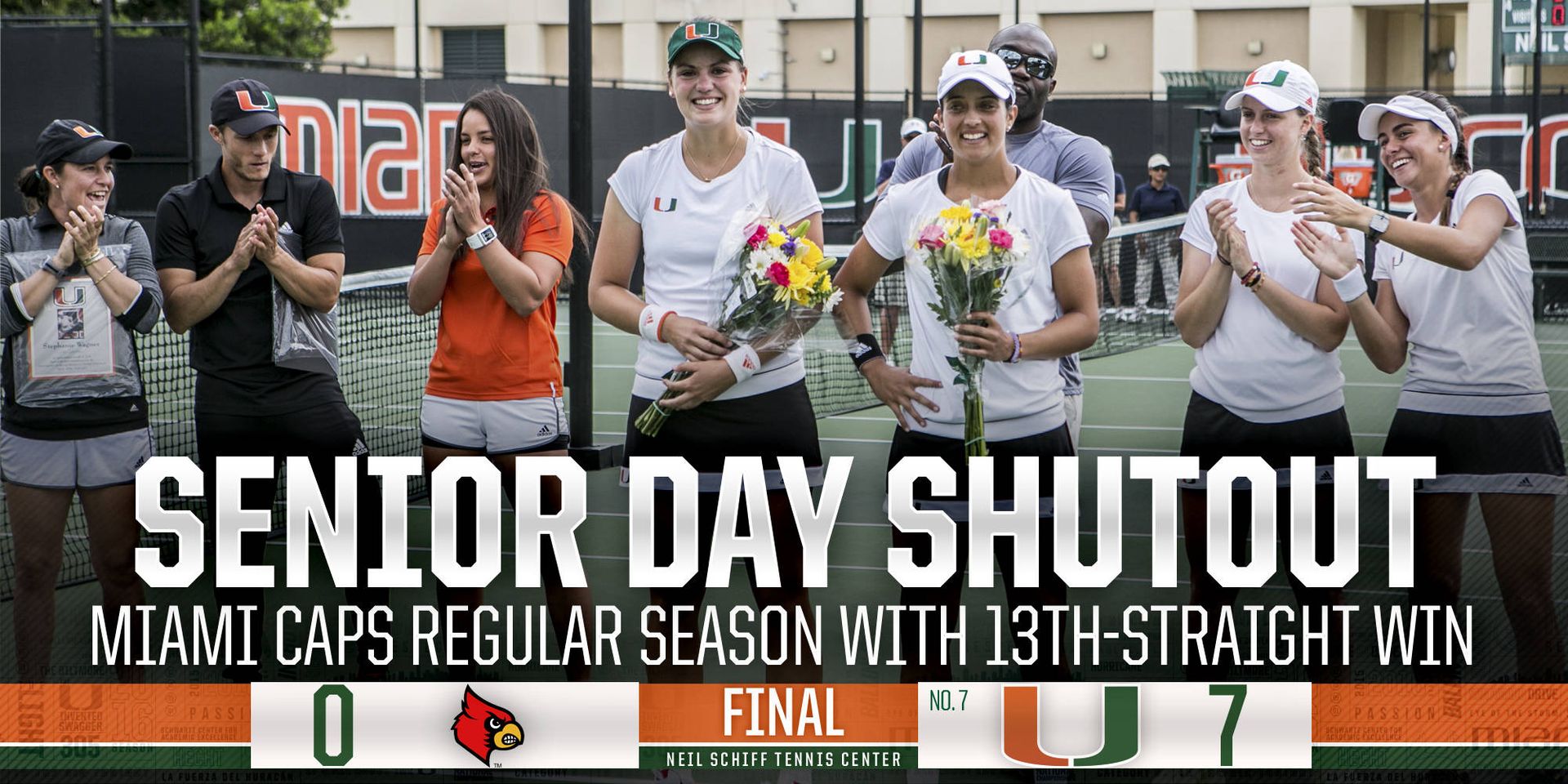 Seniors Clementina Riobueno and Stephanie Wagner, both of whom have earned ITA All-America honors during their superb careers, were honored prior to the match. Both also posted straight-set singles wins to help seventh-ranked Miami (17-4, 12-2 ACC) win its 13th match in a row.

“They embody everything that a coach is looking for in a student-athlete, period,” Miami head coach Paige Yaroshuk-Tews said of her seniors. “From tennis to who they are as people, to just their character, these are the types of kids that every coach wants on their team. They’re warriors on the court between the lines. They’re the sweetest kids off the court. They’re great students. You can’t ask for anything more.”

The match featuring the eighth-ranked pair of Wagner and sophomore Wendy Zhang and the Louisville (8-17, 0-14 ACC) duo of Ariana Rodriguez and Sena Suswam was left unfinished with the score even at 4-4.

“Three is a new team [with Fuentes and Madcur and] . . . they’ve been playing well,” Yaroshuk-Tews said. “They gel well together on the court. Their tennis complements each other. At two, we have just become more disciplined and thorough with every point that we’re playing. We have a plan and we’re trying to incorporate that plan every single point and Sinead and Clara are on board.”

Madcur and eighth-ranked Lohan made quick work of their opponents to give Miami a 3-0 lead after under an hour of singles play. First, Madcur downed Boesing, 6-2, 6-1. Lohan then followed that up with a 6-2, 6-2 win against Suswam to finish her regular season with a 20-1 mark in singles competition.

Fittingly, it was Riobueno who clinched the victory for Miami on her senior day. The Barquisimeto, Venezuela, native topped Mally, 6-1, 6-4, to seal the win for the Hurricanes.

With the match already in hand, Miami continued to pick up victories. Fuentes earned her first win at the No. 3 spot this season with a 6-3, 6-2 triumph over Pahz.

Wagner then moved into a tie with Miami associate head coach Laura Vallverdu for second place on the program’s all-time singles wins list by beating Rodriguez, 7-6 (7-4), 1-0. Her 131 victories are two shy of Bianca Eichkorn’s program record.

“Good match. We played well today,” Yaroshuk-Tews said. “We did what we needed to do against a solid opponent. I was happy Clemen was able to get out there and play a match on senior day. I think they just took care of business.”

The shutout is also the 127th by the Hurricanes under Yaroshuk-Tews, with 70 of those coming since 2009. Ten of Miami’s 19 regular season wins this year came by at least five points, including five of the final six.

Additionally, the win over the Cardinals marked the third time in the last five years Miami has finished a regular season undefeated at home.

The Hurricanes will now have the ACC Championship up next. For the third year in a row, Miami will be seeded second in the event. The Hurricanes will receive a double bye and their first match at Cary Tennis Park in Cary, N.C., will be Friday at 10 a.m.