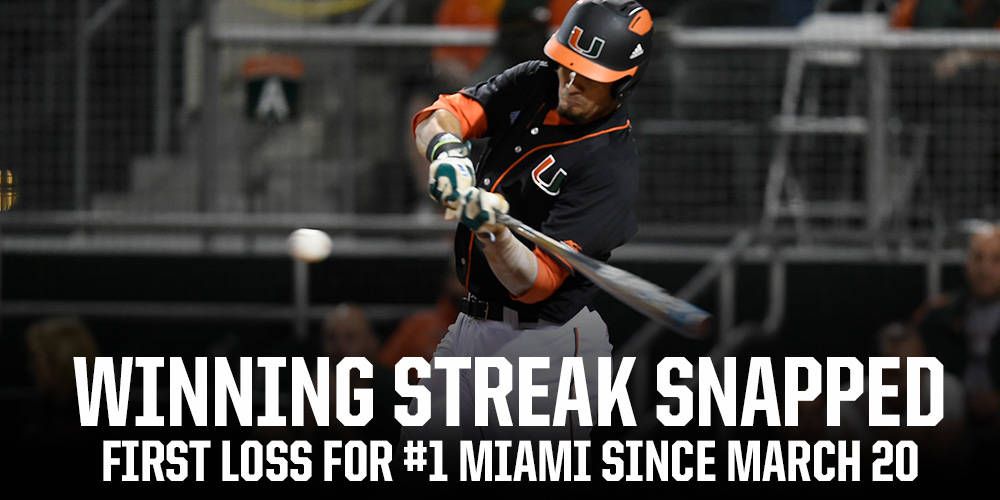 DURHAM, N.C. – Top-ranked Miami saw the nation’s longest winning streak come to an end Saturday at Durham Bulls Athletic Park, as host Duke emerged with a 12-5 victory in the second game of an ACC weekend series.

The Hurricanes (28-5, 12-3 ACC) suffered their first loss since a March 20 defeat to Louisville, snapping a 12-game win streak.

Duke (20-16, 7-10 ACC) chased Hurricanes starter Michael Mediavilla after just 1.2 innings. The Blue Devils tagged the lefthander for a career-high eight runs, jumping out to a commanding early lead that they would not relinquish.

Miami struck first for the second straight game this weekend on a bases-loaded, two-RBI single from junior Willie Abreu in the game’s first inning. But the Blue Devils responded with three of their own in the home half, and added six more in the second inning.

Mediavilla (6-1) allowed eight hits and suffered his first loss of the season.

Duke starter Trent Swart lasted just 2.2 innings and surrendered five walks, but the Hurricanes could not overcome the early deficit.

Abreu connected on a three-run home run in the sixth inning off Blue Devils reliever Kellen Urbon. The home run was the sixth of the season and fifth hit of the series for Abreu, who drove in all five of Miami’s runs.

Urbon (5-1) pitched 4.1 innings of relief. He allowed just two hits and three runs – all on the Abreu homer to right-center.

Sunday’s rubber match, set for broadcast on ESPN3 and WVUM 90.5 FM, is scheduled for 1 p.m. on Durham Bulls Athletic Park.