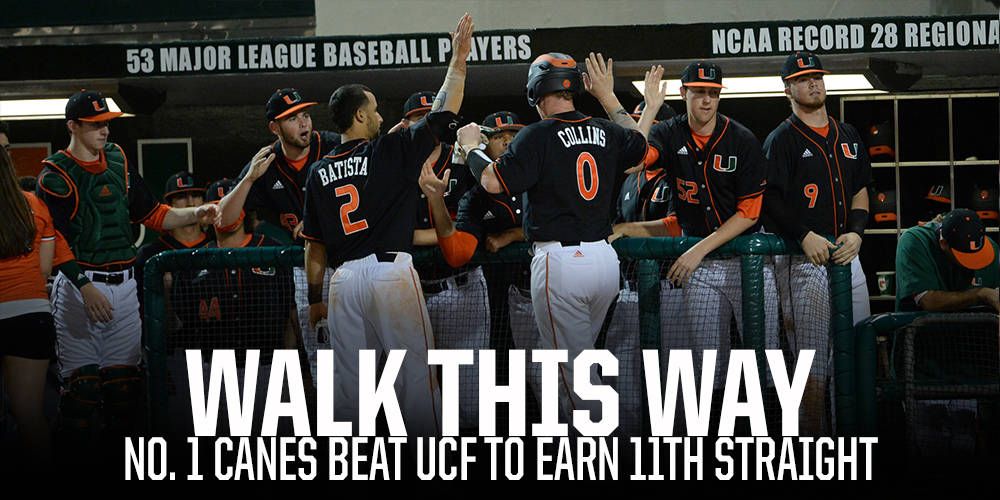 The Hurricanes (27-4) received another strong outing from sophomore righthander Jesse Lepore to improve their perfect midweek record to 9-0.

Miami’s offense took advantage of erratic UCF pitching across the night, and held on despite an eighth-inning rally from the visitors that cut into a comfortable late lead.

“I thought we played well as a team,” head coach Jim Morris said. “I know the one inning they got runs, they got three bloop hits there back-to-back-to-back.”

Junior Bryan Garcia, the nation’s active career saves leader, recorded his ACC-leading 10th save by recording the final five outs of the game. The save was the 35th of his career.

“You need to be in pressure situations and be prepared for that,” Morris said. “He has done a great job.”

“It’s a little tough,” Lepore said about the wait in between innings on a night where UCF used eight different pitchers. “It’s more mental than anything, just staying in the game, on what you want to do and [staying] on task.”

Knights lefthander Bryce Tucker, making the first start of his career, allowed a one-out single to Christopher Barr in the first and then walked the next three batters to force in the opening run.

Miami tagged UCF righthander Thaddeus Ward for five runs in the third inning to push its lead to 6-0.

The Hurricanes had just one hit in the inning – a two-RBI single from junior Jacob Heyward – but were the benefactors of two hit batsman, four walks, one throwing error and a wild pitch.

Ward accounted for four of UCF’s 14 walks and both wild pitches.

“I think we’re staying in the game. I think it was good at bats by us,” Heyward said. “There are definitely teams who can go out there and swing at anything in the world, and strike out. I thought we had a good day at the plate. We just played smart.”

Sophomore Carl Chester and redshirt junior Christopher Barr drew back-to-back, bases-loaded walks to open the scoring in the third, and Barr would score on a wild pitch to make it 4-0.

In the opposite dugout, Lepore was dominant from the game’s outset. The sophomore did not allow a baserunner until a walk from Matthew Mika in the fourth inning, and did not allow a hit until a two-out RBI double from Anthony George in the fifth.

Lepore (5-0) won for the second straight outing despite tying a career high with four walks allowed.

He struck out six batters and allowed two hits.

“I definitely want to eliminate the walks out of my game,” Lepore said. “I felt comfortable, especially in the early innings. Towards the end I just battled…I’m feeling more comfortable start by start.”

Five straight UCF batters reached base to open the eighth inning on four soft singles and a hit-by-pitch from reliever Frankie Bartow. A sacrifice fly from Kam Gellinger that cut Miami’s lead from 7-1 to 7-4.

But Garcia entered with one out in the eighth and struck out the next two batters he faced. He struck out four over 1.2 innings to secure his 10th save – moving him into sole possession of third place in Miami history.

The Hurricanes travel to Durham, N.C., for an ACC weekend series with host Duke beginning Friday, April 15. First pitch for the series opener, slated for broadcast on ESPN3 and WVUM 90.5 FM, is set for 6 p.m.