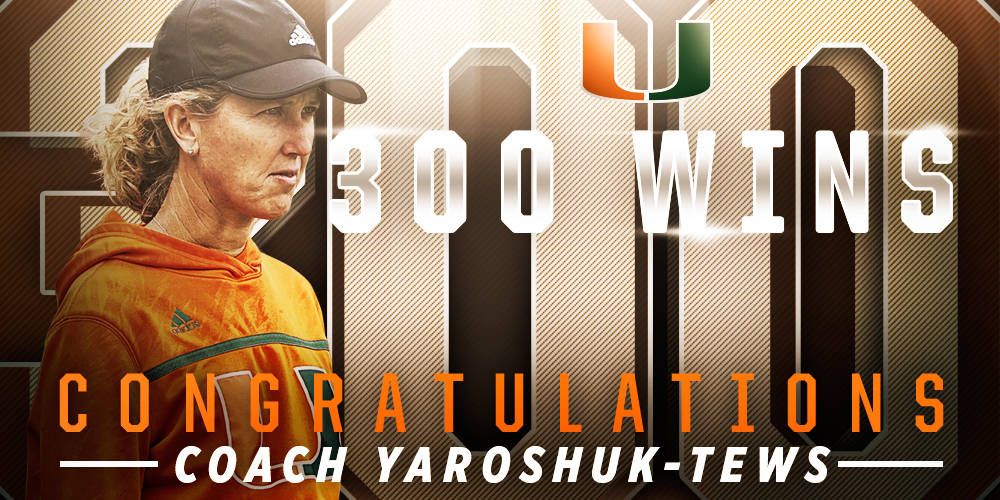 RALEIGH, N.C. – The University of Miami women’s tennis team posted a 5-0 victory Saturday at No. 37 NC State’s J.W. Isenhour Tennis Center to give head coach Paige Yaroshuk-Tews the 300th win of her career.

Yaroshuk-Tews is now 300-89 in 15 years as a head coach, all of which have come at Miami. She is the program’s all-time leader in wins and ranks second in winning percentage with an outstanding .771 mark.

“That’s a lot of W’s. When I think of the number 300, I really don’t think about myself at all,” said Yaroshuk-Tews, who has coached 13 players, including three current ones, to 25 ITA All-America honors. “I think of all the great players who have come through here, just died on the court for this program. I think that says a lot about the character of the kids who have come through here.”

For the second-straight day, Miami mounted an impressive comeback to win the doubles point. The Hurricanes fell behind to open doubles, as the NC State (11-9, 4-7 ACC) duo of Amanda Rebol and Claudia Witorkin topped sophomore Silvia Fuentes and senior Clementina Riobueno, 6-1.

Senior Stephanie Wagner and sophomore Wendy Zhang, the ninth-ranked pair in the country, pulled Miami even with a 6-4 victory against Martina Frantova and Tayla Stenta.

Attention turned to court two, where sophomore Sinead Lohan and freshman Clara Tanielian were playing together for the first time since March 14. The duo trailed 3-5, then 5-6, before forcing a tiebreaker. The Hurricanes were then down 3-5 in the tiebreaker before winning four points in a row to take the match, 7-6 (7-5), over Bianca Moldovan and Joanna Nalborska to put Miami in front, 1-0.

“I saw them really kind of click at the end,” Yaroshuk-Tews said. “We made one minor change in that we pushed them both back and then we had Clara press at the first opportunity. I think that just changing that formation totally changed the end of that match.”

Singles play began with four matches rather than the usual six due to the number of available courts. Fuentes, Wagner and Zhang were all within a game of victory at the same time and it was Fuentes who won first, posting a 7-5, 6-0 triumph against Rebol.

Tanielian’s match against Witorkin was left unfinished with the score 2-1 in favor of Witorkin, while Madcur trailed, 0-2, against Stenta when action was halted.

“What this team is doing with 11 in a row right now [and nine of them] in our conference is exceptional,” Yaroshuk-Tews said. “We don’t sit around and talk about it too much or obviously focus on the numbers that much, but when you do and you take a breath and you think about it—again, it comes down to just incredible young ladies competing for Miami.”

The Hurricanes will conclude the regular season next weekend at home at the Neil Schiff Tennis Center in Coral Gables, Fla. Miami will face No. 32 Syracuse Friday, April 15, at 11 a.m., and then will meet Louisville Sunday, April 17, at noon on senior day.