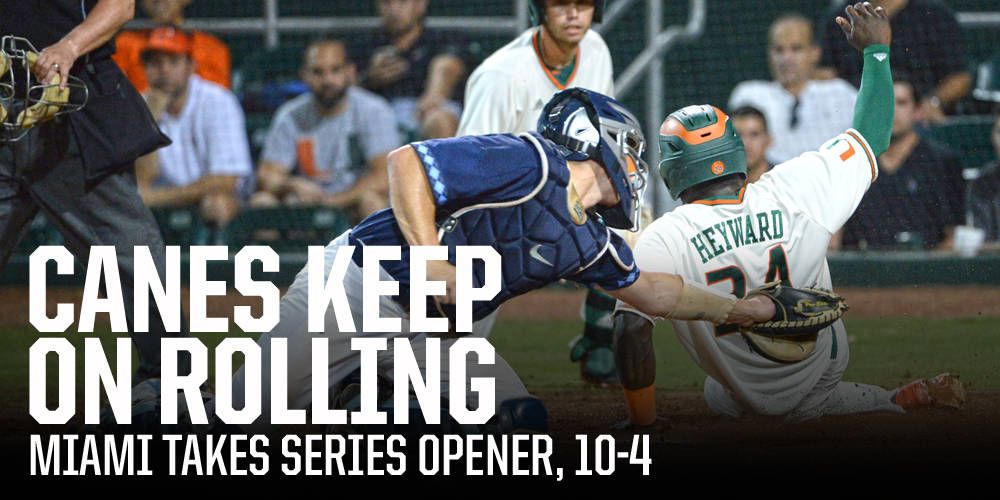 Squaring off against one of the top righthanded pitchers in the country in Tar Heels ace Zac Gallen, Woodrey more than held his own. The southpaw tossed 7.0+ dominant innings and had allowed just one unearned run before departing to a standing ovation from 3,243 in the eighth.

“I wouldn’t say anything was working more than usual, I was just able to throw strikes early in the game and let my defense work behind me,” Woodrey said. “When you’re going back and forth with a pitcher like that – their guy was really good on the mound – you have to keep your defense in it and let them swing the bat.”

The victory was Miami’s seventh against a ranked team this season.

“That was a big win for us,” said head coach Jim Morris, who was honored pregame for his 1,000th win at Miami and 1,500th Division I win, both recent achievements. “North Carolina has a really talented club. They have very good athletes as position players, and their pitcher has really good stuff.”

Woodrey (3-2) struck out two batters and allowed just four hits on the night to pick up his first win since March 4 against Manhattan.

“It’s been a slow start to the season for me,” Woodrey said. “But your goals shift. My goal when I go out there now is to get a win, to compete for my team, and I was able to do that tonight. It felt good.”

The Hurricanes offense solved Gallen in the early going. Miami tagged the junior for a career-high 11 hits, chasing him after just 4.2 innings – his shortest outing of the season.

“We’ve been swinging it well lately,” junior Zack Collins said.  “I think we left too many runners on base at the beginning of the game, but we came back and scored a lot later.

A four-run fifth inning by the Miami offense gave the hosts a comfortable lead and signaled the end of Gallen’s night. The Hurricanes (21-4, 8-2 ACC) batted around in the decisive frame, where Miami recorded six of its 15 hits.

A two-RBI double from Collins opened the scoring in the fifth and gave Miami its first lead of the night at 3-1.

“I don’t think we got jumpstarted by that,” Collins said. “We hit all game. I was just trying to get the barrel on the ball and get the run in from third.”

The Hurricanes scored three more runs in the sixth to bump their lead to 8-1. A wild pitch from reliever Taylor Sugg scored redshirt junior Christopher Barr from third base, while a two-RBI single from senior Brandon Lopez scored Ruiz and Heyward.

North Carolina (20-5, 6-4 ACC) plated a run in the game’s opening inning, one of Woodrey’s few blemishes on the night.

An RBI double from Brandon Riley put the Tar Heels ahead 1-0 early. A terrific throw from junior rightfielder Willie Abreu helped prevent any more potential damage, as he hosed Riley at third trying to advance on a flyout for an inning-ending double play.

The play helped jumpstart a string of 12 straight batters retired by Woodrey until a two-out double from Eli Sutherland in the fifth.

Miami tied the game in the second on an RBI single from sophomore Carl Chester deep to the hole at short.

Junior Willie Abreu’s two-run double in the eighth moved Miami’s lead to 10-3. The Tar Heels struck for a run off Pimentel in the ninth before he retired Riley on a flyout to end the game.

The Miami Hurricanes 2001 National Championship team will be recognized on their 15-year reunion during pregame ceremonies prior to Saturday’s game two. First pitch for the contest, slated for broadcast on ESPN3, is set for 7 p.m.