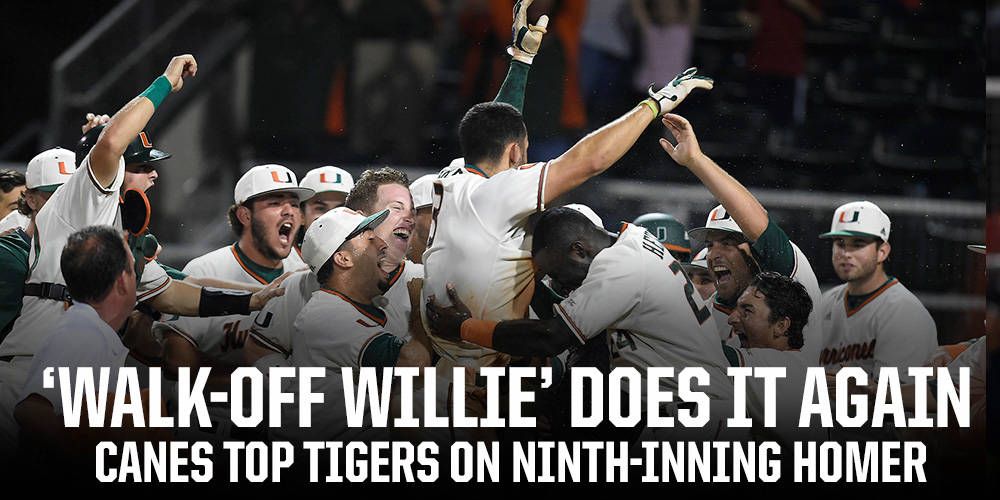 For a second consecutive Friday night at Mark Light Field, junior captain Willie Abreu cranked a game-ending home run to send fourth-ranked Miami to a dramatic victory over a ranked opponent. This time it was against the No. 17 Clemson Tigers, who took an unlikely lead in the ninth only to fall victim to Abreu’s late theatrics, as Miami emerged a 9-8 victor.

One week after blasting a walk-off grand slam against then-No. 4 Louisville, Abreu doubled up on his recent run of magic with a no-doubt, opposite-field blast off Clemson reliever Alex Bostic.

“We keep battling. That’s the name of the game,” Abreu said. “Our team has always done well doing that. For as long as I can remember, The U has never stopped fighting. It’s a great win…we have to go out there and do it again tomorrow.”

The clutch hit helped redeem an uncharacteristic performance from junior closer Bryan Garcia, who allowed three runs and blew a save opportunity when Drew Wharton connected on a go-ahead single in the top of the ninth, putting the Tigers up 8-7.

“It’s a lot of fun to watch him pick me up like that,” Garcia said. “I can’t say enough about him. When he [goes] up to the plate, I always have a good feeling that he’s going to do something special.”

When asked if his walk-off home runs were becoming a new Friday night tradition, Abreu laughed.

“I don’t want to make it a tradition. We have to win before the ninth,” Abreu joked. “It was a great team win….that’s a good team [Clemson] has out there. We were ahead some runs and we battled. We never stopped battling, even if they came back.”

In a thrilling back-and-forth affair, the Hurricanes fell behind early, took a commanding five-run lead by the sixth, fell behind by one in the ninth and then earned another walk-off win in front of 2,811.

“The at bat before I swung at some bad pitches,” Abreu said of his approach in the ninth. “I made a quick adjustment, told myself to relax and see the ball, and hit it. That’s what usually gets me through there.”

Senior lefthander Thomas Woodrey allowed single runs in the first and third innings, but settled down in a 103-pitch, 5.1-inning performance.

After a solo home run from Chase Pinder in the eighth shaved Miami’s advantage to a precarious 7-6, Garcia (2-0) surrendered the lead when Wharton connected on a two-out, two-run single in the top half of the ninth.

“I just left the ball up a little bit. I wasn’t hitting my spots towards the end,” Garcia said. “Those last three or four pitches, I was missing my spot up, and [Wharton] turned on one.”

With the win, the Hurricanes improved their home record to 15-3.

Trailing 2-0 after three innings, Miami put together a five-run fourth that chased Clemson starter Clate Schmidt and gave the Hurricanes the lead.

Miami (18-4, 5-2 ACC) sent all nine batters to the plate and took advantage of some sloppy Tigers defense in the decisive fourth. Senior Brandon Lopez, who singled and took third base on a basehit from Abreu, scored when Adam Renwick’s throw to second in an effort to nail Abreu sailed into the outfield.

Schmidt was then unable to handle a bunt single from Edgar Michelangeli, scoring Abreu from third to tie the game 2-2. A dropped flyball in right helped prolong the inning, and the Hurricanes took advantage with basehits from Carl Chester (RBI double) and Christopher Barr (RBI single) to go ahead 4-2.

Junior slugger Zack Collins capped the scoring with a sacrifice fly to left to boost Miami’s lead to 5-2.

Clemson made four errors compared to one for Miami.

“We gave them some runs, they gave us some runs – both ways,” head coach Jim Morris said. “Ours was more with walks, theirs more with errors. Bottom line is, we won, and we fought. We fought and we fought, and got a win against a really good club.”

After allowing a solo home run to Clemson catcher Chris Okey in the first inning, Woodrey settled in to deliver a quality outing. He surrendered five hit and two runs (one earned) striking out four batters.

Freshman Andrew Cabezas saw his scoreless streak snapped at 11.0 innings, as he was charged with three earned runs in the seventh.

“Our guys kept fighting. That’s the number one thing – we kept fighting,” Morris said. “We had a big lead at the end and gave up six runs over the last three innings – which is not our bullpen. Our bullpen is very strong. That doesn’t normally happen.”

The Hurricanes return to Alex Rodriguez Park at Mark Light Field Saturday for Game 2 of their series with Clemson. First pitch for the game, slated for broadcast on ESPN3, is set for 7 p.m.