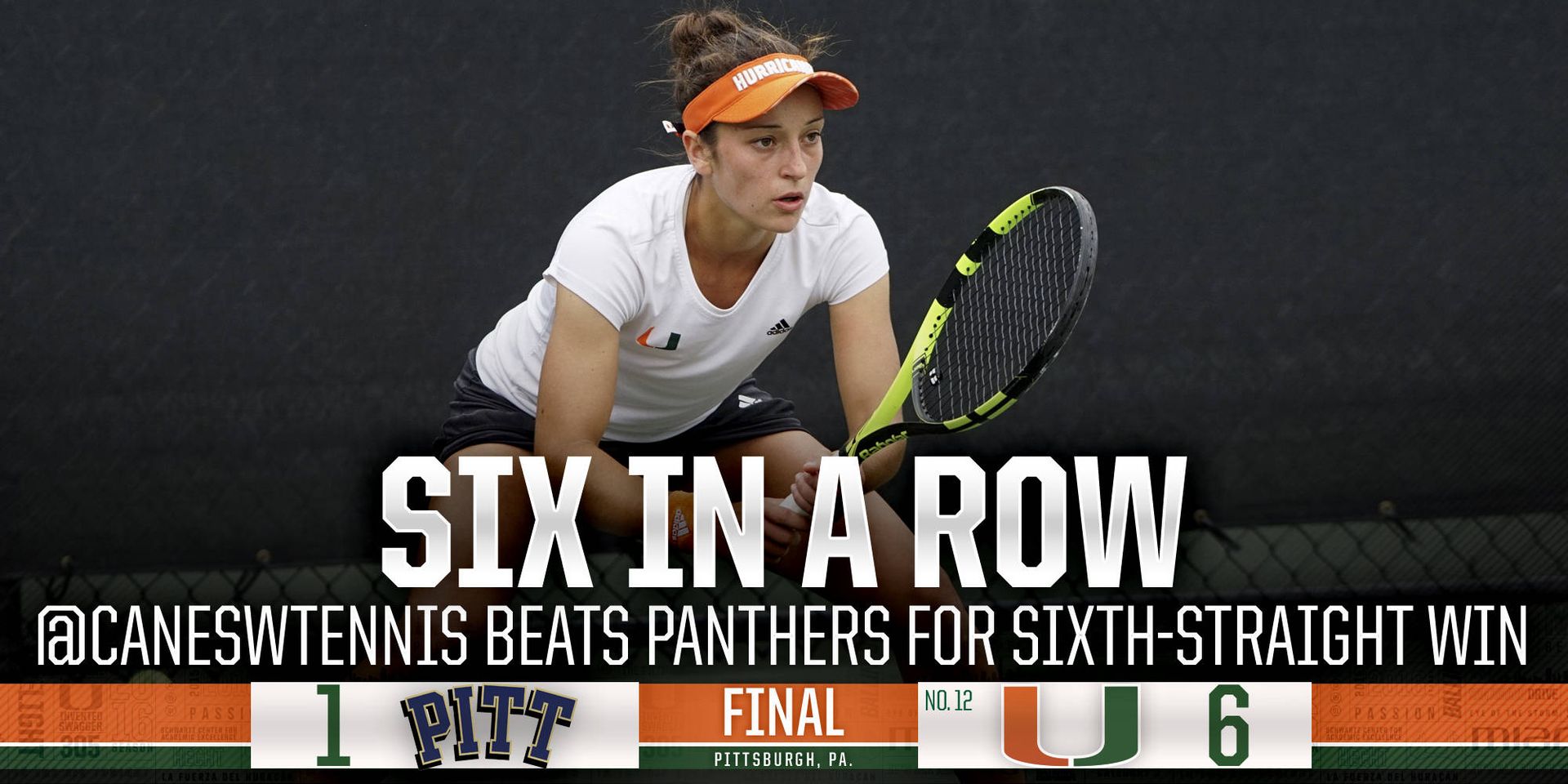 PITTSBURGH – The University of Miami women’s tennis team captured a 6-1 road victory against Pittsburgh Sunday at the Alpha Tennis and Fitness Center.

“Playing Pitt away is always going to be a tough match when the surface is as fast as it is,” Miami head coach Paige Yaroshuk-Tews. ”We responded well and kept things simple in terms of tactics.”

The Hurricanes’ No. 10-ranked pair of senior Stephanie Wagner and sophomore Wendy Zhang set the tone in doubles with a commanding victory over Aubrey Ann Blakely and Gabriela Rezende, 6-2.

The doubles point came down to a tight match between Miami sophomore Silvia Fuentes and senior Clementina Riobueno and the Panthers’ Natsumi Okamoto and Amber Washington. The Miami pair eventually pulled through after a lenghty match with a 7-6 (8-6) victory to put the Hurricanes in front, 1-0.

Freshman Ana Madcur extended the lead for Miami by defeating Okamoto, 6-2, 6-0. Feuntes then put Miami in front by three with a 6-0, 6-1 win over Rezende.

Pittsburgh’s only point of the day came from Washington, who defeated Riobueno, 6-2, 6-3, to get the Panthers on the board.

Miami’s trio of nationally-ranked players tallied the next three points for the Hurricanes. Lohan, ranked seventh in the country, was the one who clinched it, earning a 6-1, 6-3 triumph over Ma.

No. 103 Zhang dominated her match against Frey, winning in straight sets, 6-2, 6-0. Shortly after, sixth-ranked Wagner closed the day by giving the Hurricanes their sixth point, as she topped No. 123 Blakely, 6-1, 6-4.

“We showed toughness and resiliency that will be crucial moving forward,” Yaroshuk-Tews said. “We are becoming more mature as a unit, and it’s showing in tight moments.”

The Hurricanes will be back on the court Friday in Coral Gables, Fla., as they host No. 10 Virginia at 1 p.m. at the Neil Schiff Tennis Center.

To keep up with the University of Miami women’s tennis team throughout the season, follow @CanesWTennis.