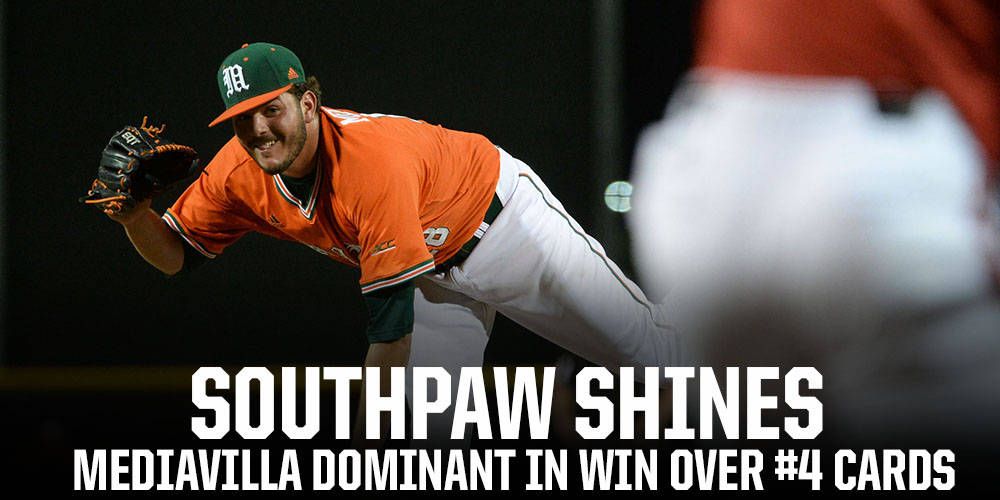 Miami Clinches Series Against No. 4 Louisville

CORAL GABLES, Fla. – Sixth-ranked Miami came out on top of a sophomore pitcher’s duel Saturday night at Alex Rodriguez Park at Mark Light Field, as lefthander Michael Mediavilla shined in a series-clinching 6-3 win over No. 4 Louisville.

Mediavilla outdueled Cardinals southpaw Brendan McKay, who entered the game with a gaudy 4-0 record and 0.33 ERA, to hand Louisville its first ACC series loss since joining the conference prior to 2015.

“It was a big win for us, to guarantee us winning the series,” head coach Jim Morris said. “They’ve got an outstanding club. They have a World Series-type club with outstanding pitching and really good position players. Our guys did a really good job to get it done.”

Mediavilla (4-0) allowed just five hits and one run over seven strong innings. He struck out four batters and walked one, needing just 87 pitches to get through a career-long outing.

He excited to a standing ovation from the 3,316 in attendance, helping extend Miami’s winning streak to five straight games.

“It’s just learning from my other outings, getting ahead of batters,” Mediavilla said about his successful performance. “I really didn’t have my curveball, but I worked with my other pitches…kind of just made them put the ball in play more.”

In the opposite dugout, McKay labored through a 100-pitch performance, lasting 5.1 innings before being relieved by Cardinals righthander Lincoln Henzman.

“Beat them every inning,” Mediavilla said about his mindset when facing an opponen’ts ace. “At the end of the day, [when] we put up runs, I shut them down the next inning, and I have to keep us up every inning.”

A two-run home run from junior Jacob Heyward opened the scoring in the fourth inning. The home run, a towering shot that sailed over the scoreboard in left field, was the second in four games for the outfielder.

“I always look fastball and adjust to anything else,” Heyward said. “He threw a fastball right down the middle and made a mistake. We had to take care of it.”

Heyward, who finished the night 2-for-3 with one walk, raised his average to .279.

“I’ve been feeling good the last few games,” Heyward said. “Picking the pitches I need to hit and the ones I didn’t, see the ball up. [McKay] had good stuff, but I just feel like it was me tonight.”

Trailing in the early innings, Louisville (15-4, 3-2 ACC) broke through in the fourth on an RBI single from Colby Fitch. But with two runners on base, Mediavilla induced an inning-ending double play by Devin Hairston to keep the Hurricanes ahead.

Miami’s star southpaw skirted damage once again in the sixth after loading the bases on a single, walk and hit-by-pitch. Mediavilla maintained his composure, getting the dangerous Blake Tiberi on a groundout to escape the jam.

“I just got out of my comfort zone a little bit,” Mediavilla said. “I had to make some adjustments, remember what me and [pitching coach] J.D. [Arteaga] worked on in between the week, and it paid off.”

He punctuated his outing in the seventh, when he picked off Colby Fitch at second to end his outing and celebrated with animated fist pumps on his way to the dugout.

The Hurricanes (16-3, 4-1 ACC) added runs in the fifth and sixth on sacrifice flies from Zack Collins and Randy Batista.

The Cardinals cut Miami’s lead to 4-2 with a sacrifice fly of their own from Corey Ray in the eighth, but Miami responded in the home half of the inning with two runs off Henzman to swell their lead to 6-2.

An errant throw from Henzman on a sacrifice bunt from Edgar Michelangeli plated the first run, while sophomore Carl Chester added an RBI single.

“We scraped in a few other runs, doing whatever we needed to as a team to make it happen,” Morris said.

Junior Bryan Garcia allowed only his second run of the season over the game’s final 1.1 innings, but recorded his seventh save with three strikeouts to clinch the series for Miami.

The Hurricanes and Cardinals return to Alex Rodriguez Park at Mark Light Field on Sunday for the series finale. The game, which was originally scheduled for a 2:30 p.m. start time, has been moved up to 12:30 PM on ESPNU due to a forecast of inclement weather.